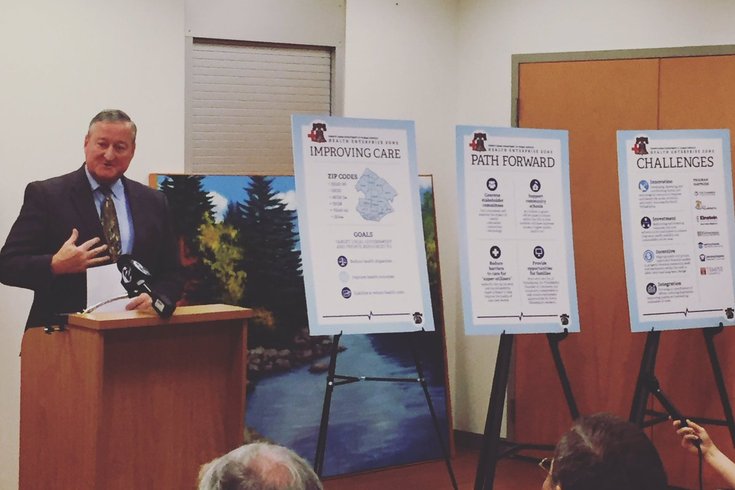 Respresentives of state and local government, medical facilities, and other health advocates launched a new effort Thursday focused on improving the quality of care for residents of North Philadelphia.

Despite the area being the home to five hospitals, four health systems and two universities, North Philly residents have the lowest life expectancy in the city.

According to a Virginia Commonwealth University study, North Philly residents are only expected to live 68 years. That's below the national average of 79 years and nearly 20 years shorter than those in Old City and Society Hill.

Another reason why the location was selected was due to the amount of Medicaid recipients. Nearly 300,000 residents receive benefits in North Philly. That number represents 13 percent of the state's Medicaid population, DHS officials said.

Mayor Jim Kenney acknowledged that work needed to be done to care for city residents, welcoming the new approach.

"[S]tatistics show they experience a higher rate of obesity, diabetes and heart disease,” Kenney said. “We need to work collaboratively with system partners to make life better for those who live here."

The HEZ will focus on four goals: coordinating human and technological resources, investing resources in core infrastructure institutions, directing public and private funds to ensure resources are available, and integrating a variety of groups.

Through the effort, officials hope to realize an increase in productivity at city schools. The HEZ will direct $1.5 million to the city to improve access to higher quality health care.

“Research shows that good health can have a tremendous impact on student academic growth by reducing absenteeism, easing disciplinary issues, and improving a student’s ability to focus and learn,” state Department of Education Secretary Rivera said.