Eflin, Thompson hope to rebound from nagging injuries next week 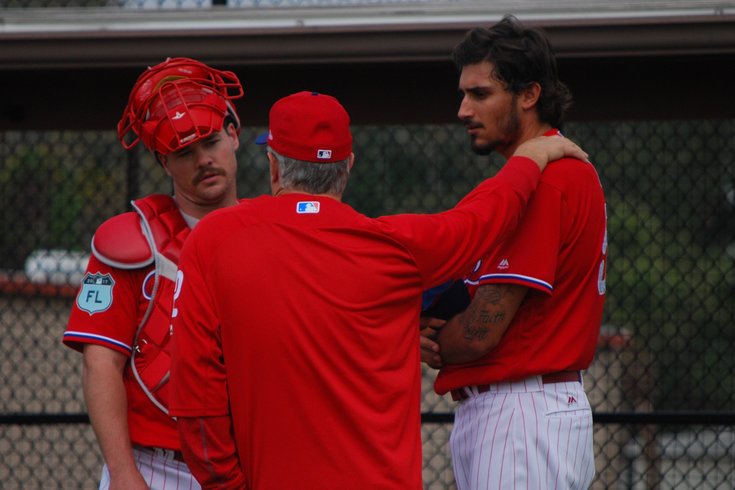 Zach Eflin had his progress slowed this week by swelling in his right knee. Eflin had surgery on both of his knees since last pitching in a game for the Phillies last summer.

CLEARWATER, Fla. – Zach Eflin and Jake Thompson, two of the young group of promising pitching prospects who checked into their first big league camp last year and made their major league debuts last summer, hope to get on the mound again next week after being slowed by nagging injuries.

The 22-year-old Eflin had swelling in his right knee after running a sprint on Thursday, two days after throwing a bullpen session on the first day of official workouts in Clearwater, Fla.

“I thought I wasn’t supposed to feel this kind of thing,” Eflin, who had surgery on both knees in the last six months, said to himself on Thursday.

But, coincidentally, the doctor who performed Eflin’s surgeries, Dr. Steve Cohen, happened to be in Clearwater. Despite dealing with knee issues for more than a decade, and requiring surgery recently, Eflin was unconcerned after having the right knee stretched out and examined by Cohen.

“Everything felt right, everything was smooth, nothing was structurally wrong,” Eflin said. “It was just a little swelling. It just kind of cramped up on me, just locked up. Today it feels great. I have a bullpen on Monday, so, I’m good to go.”

“I’ve been throwing for the last five days,” Thompson said. “I’ll probably get off the mound sometime next week.”

The 23-year-old Thompson said the injury “crept up” during offseason workouts. He spent the winter in Clearwater and had already thrown two bullpen sessions before the decision was made to back away until the inflammation subsided.

“If there was a spring to do it, this would probably be the one with the World Baseball Classic,” Thompson said of starting a seven-week spring training, nearly a week longer than most springs, behind the rest of camp. “It definitely could have been a lot worse.”

Barring injuries to the five projected members of the major league rotation – Jeremy Hellickson, Clay Buchholz, Jerad Eickhoff, Aaron Nola, and Vince Velasquez – Eflin and Thompson are expected to begin the 2017 regular season atop the rotation at Triple-A Lehigh Valley.