Eight Eagles players who could be trade bait 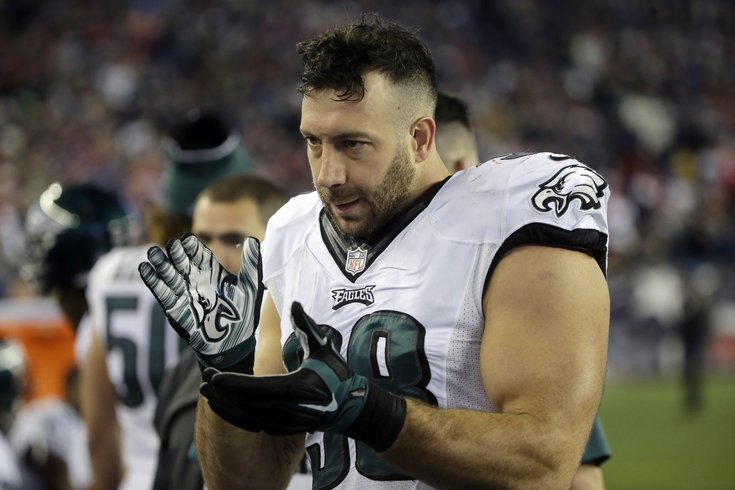 Connor Barwin is a good player and a good person, but he's an imperfect fit in the Eagles' 4-3 defense.

If there's one thing Howie Roseman and the Eagles as a franchise in general like to do, it's wheel and deal. By my count, the Eagles have traded 29 players since 2010.

They were, in order from the most recent:

I don't have data on the other 31 teams to back this up, but trust me when I say that is way above the league average.

The above list is a mix of camp bodies, bad players, good players, great players, and even a face of the franchise. Let's take a look at eight players who could be used as trade bait this offseason with Howie's triumphant return as captain of the ship.

Since 2008, three teams have successfully franchise tagged players and then dealt them for high draft picks to other teams. In case you missed it, we published a 2200+ word piece on the possibility of tagging and trading Sam Bradford. I have nothing more to add to what is in that piece.

Running back is somewhat of an underrated need for the Eagles this offseason. They are stuck with DeMarco Murray in 2016, but can move on from him and save $4 million off their cap in 2017.

Meanwhile, Darren Sproles will turn 33 in June and Ryan Mathews is effective when healthy, but rarely fully healthy. The Eagles don't have an obvious immediate need for a new back, but they will next offseason.

If the Eagles were to select a running back in the draft, it may make sense for them to then go ahead and deal Mathews for a Day 3 pick. Mathews has a reasonable salary and could be an attractive option for a team looking to bolster their running game.

Huff is a very difficult player to figure out under the new regime. At times, he has shown that he can be explosive once he gets the ball in his hands. The Chiefs had a creative rushing attack in which they often used jet sweeps. If Doug Pederson brings those concepts to Philly, Huff could be effective within a scheme that uses creative ways to get the ball in his hands. In Chip Kelly's offense, the Eagles were never really able to do that with Huff.

On the other hand, if the Eagles go with a young quarterback, the smart move may be to surround him with more polished wide receivers. That is not Huff.

At the Senior Bowl last week, Doug Pederson was emphatic that the Eagles are going to bring back Jason Peters in 2016.

The Eagles are already likely to try to upgrade both guard spots this offseason, and moving on from Peters would open up a third hole along the offensive line. However, on the premise that the Eagles are not likely to be contenders next season, we wondered early in December if the Eagles might be better served to try to trade Peters for a draft pick.

LT Jason Peters: Peters turns 34 in January and is currently the third-oldest offensive lineman in the NFL. While Peters has had a tremendous career and is a borderline Hall of Fame talent, his career is clearly in decline and he has experienced multiple injuries of the "nagging" variety this season. In 2016, he'll count for $9,737,500, of which the Eagles can save $6,737,500 by releasing or trading him. If the Eagles are realistic about their Super Bowl aspirations next season (they shouldn't have any), they could try to find a trade partner that is a legitimate contender in need of a tackle. They wouldn't get a ton for him, but with a large number of holes to fill, every lottery ticket counts.

While it would appear the Eagles don't share that view, if some team made an offer for Peters, they would have to consider it.

Barwin has been a really good player for the Eagles over the last three years, and a positive influence in the locker room. However, he is an imperfect fit in the Eagles' 4-3 defense. Jim Schwartz mentioned Barwin as a defensive lineman in his scheme, so it would appear that's where he'll play if he remains with the team. Personally, I think Barwin can play 4-3 DE and has the athleticism and size to be a quality SAM linebacker as well.

However, his true fit in the NFL is the role he has played with the Eagles since 2013 -- as a "Jack" linebacker in a 3-4. I could very well see another team come calling to check on Barwin's availability. If the Eagles traded Barwin, they would save $6,150,000 on the cap in 2016.

It would cost the Eagles more to cut Marcus Smith than keep him in 2016, but they would essentially break even if they were to trade him. Sometimes you'll see NFL teams trade one bust for another like the Chiefs and 49ers did when they swapped former first-round wide receivers Jonathan Baldwin and A.J. Jenkins for each other. Another example is when the Cowboys traded former first-round bust LB Bobby Carpenter to the Rams for another bust in OT Alex Barron.

If the Eagles have no use for Smith in their 4-3, it may make sense for them to deal him to another city for some other reclamation project, where both players could get a second chance. Would Browns CB Justin Gilbert, Jets CB Dee Milliner, or Bills QB EJ Manuel do anything for anyone?

Alonso is a smaller linebacker who could struggle against the run if Jim Schwartz plans on utilizing a lot of wide nine looks. During locker room clean-out day after the conclusion of the season, Alonso was asked if he has ever played OLB in a 4-3 defense.

"When Schwartz came into Buffalo last year that's probably where I was probably going to be, but obviously I missed the whole season," said Alonso. When asked if he ever played in a 4-3, Alonso simply said, "No."

Chip Kelly would have drafted Taylor Hart in the third round if he were running the draft in 2014, but Roseman talked him out of it.

"We would have taken him in the third," said Kelly to reporters after making that pick. "We're fortunate. I think Howie did a great job of how we ordered it today... He guaranteed me Hart would be there in the fifth and he was right."

Hart is going to be a poor fit in the Eagles' 4-3 scheme. Maybe Chip is still willing to overpay for his former Ducks.