Ellen, Bradley Cooper team up to take on teen in need of millions of retweets for free Wendy's nuggets 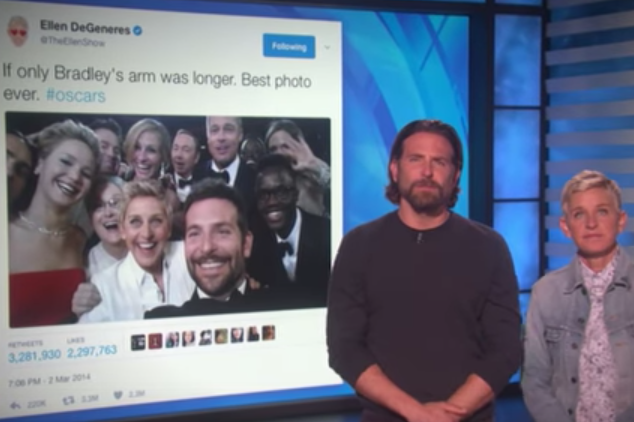 Ellen DeGeneres and Bradley Cooper put out a PSA earlier this week in hopes of defending their Twitter record.

Ellen DeGeneres and Bradley Cooper have joined forces in hopes of defending their coveted Twitter record – a preventative measure that's at risk of being taken away by a teenager desperate for Wendy's chicken nuggets.

Cooper, who hails from Philadelphia, joined the comedian and host of "The Ellen DeGeneres Show" earlier this week to put out a PSA.

The two are referring to a high school student who tweeted at the fast food chain asking how many retweets he would need for a year-long supply of free chicken nuggets. Their response? Eighteen million.

That's a threat to DeGeneres, who currently holds the record for most retweets for her famous 2014 Oscar selfie which has 3.3. million retweets.

If only Bradley's arm was longer. Best photo ever. #oscars pic.twitter.com/C9U5NOtGap

HELP ME PLEASE. A MAN NEEDS HIS NUGGS pic.twitter.com/4SrfHmEMo3

"If you think I'm going to lose that record to some chicken nugget kid, you are out of your cluckin' mind," she said.

Though, Wendy's may be getting the final word.

Bradley Cooper? He doesn’t even have a Twitter. Don’t let him keep @carterjwm from his nuggs. #NuggsForCarter https://t.co/RkG6kARNEw

Watch the video below: