Earlier on Tuesday, a story appeared on The 700 Level titled, "The Legend of Dick Mahoney." It's part Sidd Finch and part Uncle Drew, with a little Bobby-Valentine-wearing-a-fake-mustache-in-the-dugout thrown in for good measure.

And it's probably the best thing I've read a while.

I know there has been a lot of speculation about myself & @thedickmahoney As his friend&representative, he apologizes for his abrupt

departure from the Collar, but says his return is imminent. Maybe in another sport.

On its surface, the guest post (from reader Jeffrey Laughhead) is a story about one man's domination of a Center City Philadelphia softball league. What it actually is, however, is a story about the length's one professional athlete went to just to be "one of the guys."

Mahoney, who rocked a Jheri curl and, according to Laughhead, looked "like Eazy-E circa 1988," was a mystery to the other players on his Center City bar-league softball team. But he helped their team climb to the top of standings, so they weren't going to complain. 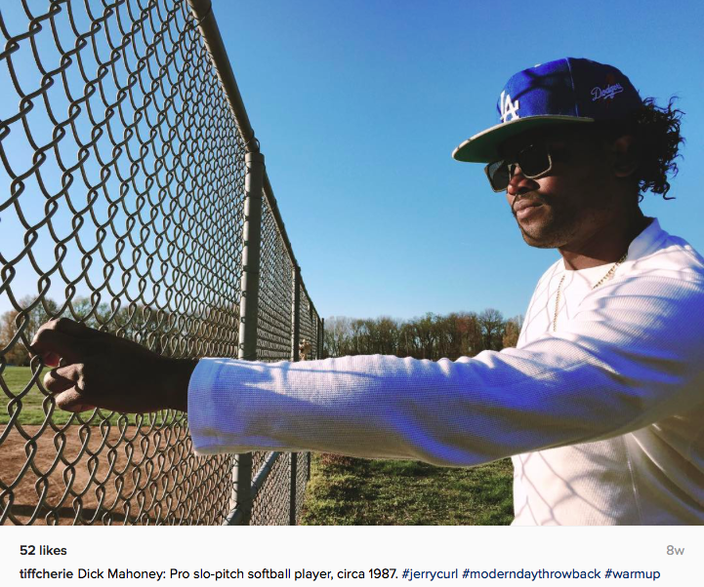 When he wasn't hitting home runs, making highlight reel plays in centerfield, or occasionally over-running his teammates on the base path, they would try to find out a little more about who this guy was and how he came to be on their team.

Mahoney rarely went to the bar with them after the games, and when they did ask him about his background, his answers were unusually cryptic -- like when he was asked about his career and said he did "a little bit of this, a little bit of that."

Naturally, that caused Laughhead and his teammates to begin speculating.

The woman who organizes our softball team asked Greg what Mahoney's email was so he could be added to our thread. "Doesn't have an email," Greg said. When some other teammates witnessed Mahoney park his Porsche Cayenne next to the field, people sort of put Greg on the spot about Mahoney's background, Greg just said, "You're going to have to find out for yourself what Mahoney does for a living.I can't tell you." Conspiracy theories started to spread that Mahoney was a drug dealer or was in porn (he missed a few games because he was flying back and forth from Southern California, apparently.)  [The 700 Level]

But then, almost as quickly and mysteriously as he arrived, Mahoney's softball career came to a abrupt end. And when his actual identity was revealed, the truth was better than any of the wild conspiracy theories his teammates had come up with on their own.

Anyway, I get an email from Greg last night saying that Mahoney was no longer going to be on our softball team anymore because Dick Mahoney is actually WALTER THURMOND and since retiring from the NFL a week ago, is making moves to go back to LA to pursue filmmaking.

The jheri curl was a wig. The alias Dick Mahoney, my friend pointed out, is a combination of Dick Tracy and Breathless Mahoney, which may speak to his love of film.  [The 700 Level]

That's right. Former Eagles defensive back Walter Thurmond III, who two weeks ago retired from football at just 28 years old, put on a Jheri curl wig and transformed himself into Dick Mahoney each week in order to play amateur softball.

You can't make this stuff up.

Thurmond, who attended Oregon and won a Super Bowl with the Seahawks, may be focused on the directorial side of filmmaking, but after reading this, he may have a future in acting -- or, at the very least, in wardrobe.

READ THE FULL STORY HERE. (It's worth it just for the pictures...)