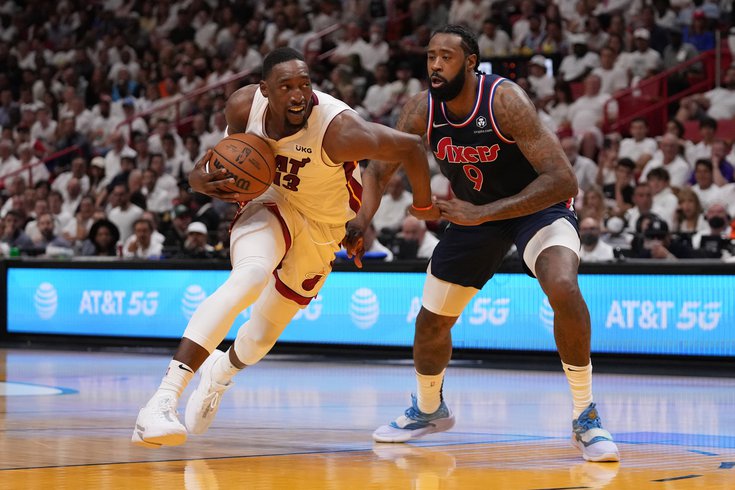 The Sixers center situation behind Joel Embiid is anything but solid.

No, really. The Sixers went down to Miami without a – if not, the – top player in the NBA and gave max effort. Highlighted by a close first half in the opening game and followed up by Tyrese Maxey coming of age against one of the top defensive teams in the league.

No moral victory is going to change what the box score and game tape say, the Sixers were ultimately outplayed by a better team. Isn’t that what we expected without Joel Embiid? The results are only problematic if you truly expected something different, or if the team was a bunch of lifeless vessels watching a blowout happen in slow motion.

The means to this end in South Beach are far more important than asking Doc Rivers to make some adjustments if he’s not getting back Embiid. Life is different for this team without a guy who has every claim to the MVP as anyone else, so it should come as expected that the Sixers wouldn’t beat the top seed on their home floor.

The Heat were supposed to be up 2-0 without Embiid, but the effort was a question coming into this series. It’s different than caring, or even trying, as we knew the Sixers were outmatched from a talent standpoint, rather showing up every possession and not taking off plays.

Harden, Maxey, and Tobias Harris are all out there intent on keeping their team in this series even if the record says otherwise. Nobody should be looking for anything more than positive recognition for doing what a lot of people thought would be tough, staying in a series both mentally and physically without their leader.

The Heat are just better and miss fewer open shots. They play better defense and are much deeper. Guys like PJ Tucker and Victor Oladipo can subtly shift a game, and even a series, to Miami’s favor. It’s not just the Jimmy Butler “Revenge Tour” coming to South Philly, rather a complete team that relies on key rotations like using Tyler Herro against more second units.

Erik Spoelstra is just a better coach than Rivers. Pat Riley created while Daryl Morey inherited. The Heat are just a better organization overall right now. Miami won’t need to make drastic changes if they come up short this year, while the Sixers are still in the boat of musical chairs.

For now, all of that doesn’t matter for the next couple of games. One thing we always know is that the Sixers will have a home court advantage anytime they play a postseason game. Doesn’t matter the team or player coming to town, we know it will be electric.

There’s a small sense of relief to see these guys go out there — from Harden who is noticeably ailing, to Maxey who is shining when it matters most — and actually bust their butts. Nobody walked off the floor early in disgust like a LeBron exit, nor was there any actual blowups with this team on the bench. Hell, even Doc Rivers seems to be getting some internal support from players and they seem to be responding on the floor.

Again, the Sixers without Embiid are not talented enough to beat Miami. They will miss open shots far more often than their opponent. The “What if they hit more 3s” argument was immediately shredded in Game 2, as the Heat were the ones to do it, obviously, as they have season-long 3-point shooters and a coach that doesn’t neglect the shot.

I don’t have the energy nor the time to fight over DeAndre Jordan or Paul Reed, because neither matter in the big picture. No championship team is relying on either for quality minutes or will be there in any key spot. So, if that’s your bag then go ahead and continue to pile on Rivers, I won’t stop you, but do not overlook the fact that a non-playoff team without Embiid still showed up against the top seed.

I’m not giving out any participation trophies nor am I asking you to hit them with a standing ovation, but you know all too well that if there was chaos, or drama, or some player of coach flipping off a fan – it would lead the morning talk shows all over the country. It would also bail out a lot of non-hoop people from having to talk about the actual game.

We fully expect this effort to continue and coincide with the return of Embiid – most likely for game 3. There is zero doubt that even if the man is down to one hand and one eye, Embiid will – metaphorically speaking for Twittidiots – die on the floor. There’s nobody that represents the term “effort” better in our city, which isn’t a knock, it’s just how hard this guy plays.

I don’t know if the Sixers are good enough to beat Miami in this series even with the big man back in action. They may not be good enough to win Game 3, but we know they will try which should catalyze your expectations beyond just being excited to see Embiid again.

Remember, this is Philadelphia. We just had ourselves a night last week only to be reminded of how bad things can get, overnight. I don’t get the sense that the majority of Sixers fans sense the team’s mortality and it’s not just because Embiid is expected to return. Fans got to see a team still try to win a game, still put up some fight even though talent eventually took over in the end.

The smart ones recognize effort — how it can breed excitement and the right kind of energy. There is still tangible hope remaining for fans and players alike, which is truly all anyone could ask for knowing the Sixers would be down when returning home.