Facing battery charge, Bradham confident his name will be cleared 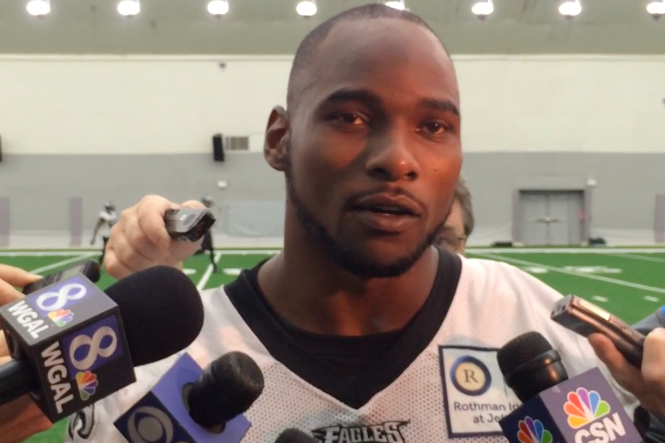 Nigel Bradham talks to the media on Thursday.

After the Eagles’ first full-squad workout on Thursday at the NovaCare Complex, there were two players the media sought out because of recent off-field incidents. And if Nelson Agholor can try to put the sexual assault allegation behind him, Nigel Bradham is still staring at his situation right in the face.

A free-agent signing this offseason, projected to start at linebacker after following new defensive coordinator Jim Schwartz from Buffalo, Bradham was arrested on Monday in Miami on suspicion of assaulting a hotel worker. He was then charged with aggravated battery.

Bradham couldn’t echo any of the same “poor decision” sentiments that Agholor offered due to the ongoing nature of the case, but he didn’t hesitate when asked whether he thought his name would be cleared.

“I can’t really speak on that part because [the investigation] is still ongoing, but I am confident my name will be cleared.”

Like Agholor, Bradham will have to face a perception problem regardless of the legal outcome in South Florida. Unlike Agholor, Eagles fans weren’t acquainted with Bradham before he found himself in trouble.

As far as first impressions go, this wasn’t a great one by any means. The 26-year-old linebacker expressed regret that the incident in question happened before fans got a chance to see him play in Philadelphia.

“You don’t want that to be a part of your legacy at any time throughout your career,” Bradham said. “And it’s my first year here, just getting started. I definitely didn’t want to start out with that being out there.”

On Wednesday, Doug Pederson mentioned the conversation he and Bradham had, which the player described as a “heart-to-heart.” Bradham said that he apologized to his coach for being a distraction to the team.

Still, Bradham believes that this is a blip on the radar.

“I’ve pretty much been good my whole life, pretty much staying out of trouble,” Bradham said. “I’ve only been in two [legal] incidents my whole life and this was the first time I’ve ever been arrested. So it’s one of those things where I learned a lot.”

Bradham said he hopes not to miss any time on the football field for court appearances, but he acknowledged the situation is now out of his control. He again expressed confidence that the situation will work itself out, though.

“I knew some things didn’t want to go how I wanted it to go, but I’m pretty much confident things will go right [from here],” Bradham said.