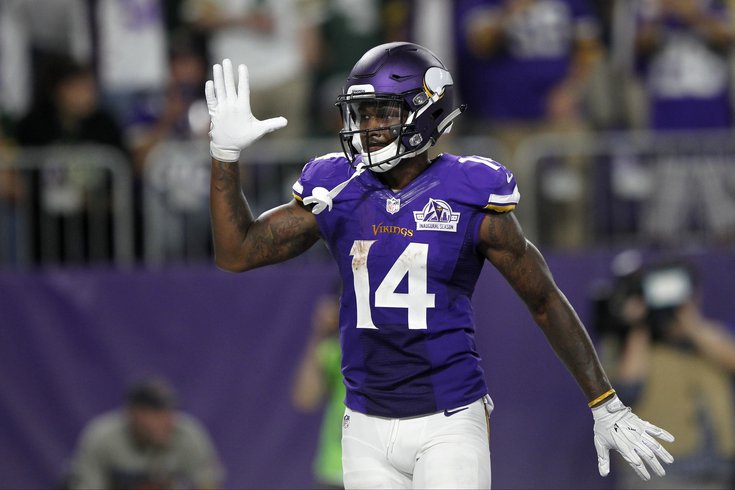 There are a ton of traps at wide receiver this year. The shuffle of quarterbacks this offseason may shake a few of the regular top wideouts off the top of their game, as new offensive schemes, new chemistries between players and a lack of offseason prep could make things hard for fantasy drafters this season.

We've pinpointed a handful of wide receivers who — while immensely talented and who have an impressive body of work behind them — really don't look like they'll produce in the numbers expected by ADP or fantasy football rankings across the internet.

Here are some players who are destined to play below their projected draft positions (rankings are based on PhillyVoice's wide receiver ranks for 2020):

Evans (and also Chris Godwin) live on the deep ball, which is why it was so exciting to watch them play with gunslinging Jameis Winston the last couple years. Winston is now gone, and the greatest quarterback of all time is now on the roster. But at 43-years-old, Tom Brady isn't much for throwing it deep.

He is also a total wild card. We have no idea what he'll look like in a new offense for the first time, how often he'll throw it deep — if he even can still throw it deep — or if he will have chemistry with his new offensive weapons. Despite the fact that Evans is tied for the fifth best touchdown total (7.5) according to TheLines.com's consensus odds, we are looking to avoid the Tampa Bay situation whenever possible, at least until some concrete information emerges. And unfortunately, that very much hurts Evans' typically high draft stock.

Cooper is a name to avoid, at least at his projected draft slot, for different reasons than with Tampa. Dak Prescott loves hooking up with Cooper, and the Dallas wideout may be one of the most fundamentally talented pass catchers in the game. But Ezekiel Elliott is a dual threat, Michael Gallop is emerging as a potent No. 2, and the team spent a first-round pick on CeeDee Lamb.

There just don't seem to be enough targets to go around in Dallas — at last to warrant Cooper being a first- or second-round pick. All three of the above mentioned receivers are worth rostering and even starting, but none will consistently post WR1 numbers in 2020.

There are  wideout Michael Thomas and running back Alvin Kamara, and then there is everyone else. Since the duo teamed up three years ago, there really hasn't been a start-worthy pass-catcher in New Orleans alongside them.

Sanders is talented but is also aging, and his volume is not guaranteed, nor is his health. He is one of those wryly veterans who will contribute a few touchdowns this season but will not be a consistent enough target to warrant starting. He is a bench piece that should be avoided until the second half of the draft. There are a lot of young emerging wideouts with more opportunity to target.

Will the former Vikings star be as productive without Adam Thielen to distract defenses? Will he be as targeted as he was by Kirk Cousins? Can Bills quarterback Josh Allen improve his deep accuracy with Diggs now in Buffalo?

Those are too many important questions to warrant being picked in an early round in fantasy this year. Diggs will surely be the No. 1 wideout in Buffalo, but what will that look like? I can already see fantasy owners being extremely frustrated with his production in a new scheme with a new quarterback and coaching staff. He's a name to avoid.