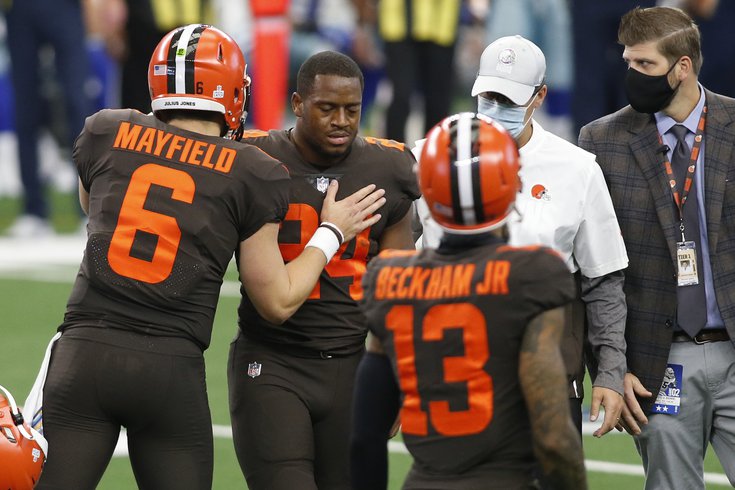 Cleveland Browns running back Nick Chubb leaves the field with an injury as quarterback Baker Mayfield offers some support.

Has it ever been this bad before?

Another week means another crop of fantasy superstars could hit the bench with injuries after Week 4.

Here's an early look at what we know about some big names who got hurt this past week, and the best outlook and advice we can give heading into Week 5:

Here's the big one. Chubb hurt his knee early Sunday in the Browns win over the Cowboys and it was frustrating for his fantasy owners to see the offense and run game firing on all cylinders, wondering what kind of production he would have had if healthy. His knee injury could be series and an MRI will tell us more this week. Browns officials are "cautiously optimistic" it is not a torn ACL so that's good at least.

They appear to be right, but he will still miss some time reports said Monday, almost half the season:

#Browns RB Nick Chubb is expected to miss roughly 6 weeks with his MCL sprain, source said, which includes a bye week. He could return in November.

Kareem Hunt will no doubt see his value go up, as well as D'Earnest Johnson — a former AAF running back who out-touched and out-gained Hunt with 95 rushing yards vs. Dallas.

Bad news for Ekeler, and for those who took him in fantasy, as a hyperextended knee and hamstring injury look likely to sideline Los Angeles' top running back option for multiple weeks. There are talented backups in LA, but they're probably already rostered in Justin Jackson and Joshua Kelley, but if either are on waivers in your league you should pounce this week.

Just an update as injuries mount in Tampa that Godwin, according to head coach Bruce Arians, will not be ready to play on a short week, Thursday against the Bears.

Another key Tom Brady weapon could miss Week 5, as Howard hurt his Achilles in Week 4 and could miss some time. Two other minor Tampa Bay offensive players, LeSean McCoy and Kenjon Barner each sustained injuries Sunday and may miss time as well.

Arizona's top running back had just 13 carries and no catches Sunday before exiting with a chest injury in the fourth quarter. With the Cardinals trailing, perhaps it was a precaution — but it's an injury worth paying some attention to. Chase Edmonds is the No. 2 if Drake is hurt next week.

Fant, who is emerging as the best pass-catcher in Denver among a slew of injuries to wide receivers, looks to be week to week and, according to ESPN, will likely miss Week 5 against the Patriots. His official designation with a sprained ankle is week-to-week. Broncos head coach Vic Fangio said KJ Hamler was also unlikely to play next week.

Atkins left Sunday's loss to the Vikings with a reported head injury and looks to have sustained a concussion. There is a chance he is unable to play in Week 5 so keep an eye out for tight end alternatives. Perhaps Darren Fells gets more targets.

Another tight end who might have a concussion is Eifert, who took a hit to the head as well. He will enter the protocol and is worth monitoring. His back up is James O'Shaughnessy.

Let's wrap this up with some good news we've dug up, with the Titans top wide receiver looking ready to return to the field in Week 5. That is, of course, if Tennessee is able top overcome its COVID-19 outbreak before next week's slate of NFL games. Brown will be a major boost for Ryan Tannehill's offense and fantasy owners will no doubt rejoice in his return to action.