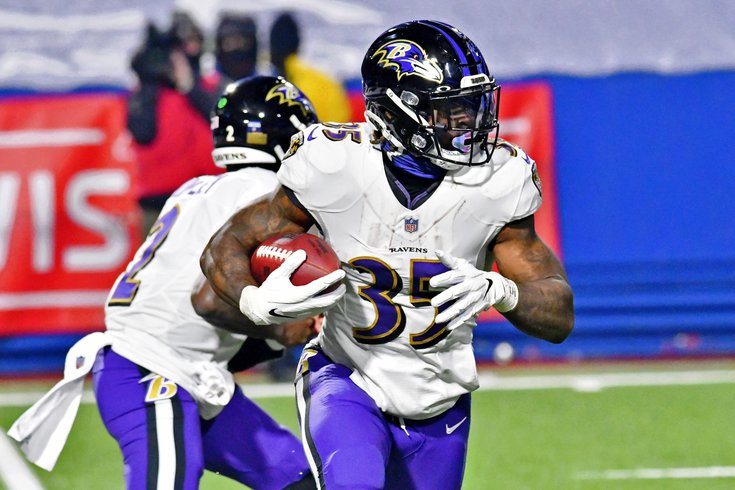 Gus Edwards is done for the year as the Ravens nightmare continues.

We typically like to wait until after a full week of action to write about the latest fantasy injuries, but it was a costly week of practice for NFL teams, as most prepare for the season to kick off this coming weekend.

Which injuries are worth worrying about? And which players have already been lost for the season?

Here's quick whip-around and look at the latest:

If you were a J.K. Dobbins owner who was able to snag Gus Edwards you were feeling pretty good, with the Ravens run-first offense. But Edwards tore his ACL Thursday, joining Dobbins (same injury) and Justice Hill (torn Achilles and later waived) with season ending injuries. So what now? Well, the top remaining RB on the roster was Ty'Son Williams — but Baltimore was proactive, adding veterans Le'Veon Bell, Devonta Freeman and Latavius Murray. There is really no clear picture as to what will happen with the Ravens ground game, so taking a speculative stab at one of the aforementioned backs could be a way to get yourself a starting running back. Or it could be a waste of time. It depends on how desperate you are.

Ekeler missed practice Wednesday and Thursday with a hamstring issue — and it could just be precautionary. After all, Ekeler missed six games in 2020 with hamstring issues and the Chargers surely want to avoid a repeat. However, if he is unable to practice again Friday it may be cause for worry. It's worth keeping an eye on his back up, Justin Jackson, just in case he is a late scratch.

Gallup looked good in Thursday's shootout loss to the Buccaneers, but left midway through the game with an ankle injury and did not return. With over a week until their next game it's worth monitoring his status for Week 2.

Agholor did not practice Thursday with an ankle injury, and he might be someone to avoid with unknown quantity rookie Mac Jones making his debut Sunday anyway.

You just know Jameis Winston — for better or for worse — is going to sling the ball as the Saints starter this year. We already know he won't have Michael Thomas for a while, as he recovers from offseason surgery. It's looking like he won't have Smith to start the year either, as he continues to sit out practices due to a hamstring. Fire up Marquez Callaway, as he is expected to be the main beneficiary of targets down field.

Engram was a pretty big question mark to be ready for the season as he was banged up in training camp, and a lingering calf injury is threatening his Week 1 readiness. He is probably going to be out for a bit.

For what it's worth:

Evan Engram slowly running a route. Not looking like someone who will play on Sunday. #Giants pic.twitter.com/gSuy6K5miF

The wideout expected to be the Jets' No. 1 is currently on the COVID list, but head coach Robert Saleh said there is a chance he is off it and playing come Sunday. Keep an eye on his status as it develops.

An update here on Samuel, who will not be playing anytime soon for the WFT:

Stevenson, a rookie, was expected by many to be a big sleeper in fantasy after a breakout preseason. He dislocated his thumb Wednesday so his status for Week 1 is in jeopardy. This means only good things for Damien Harris.