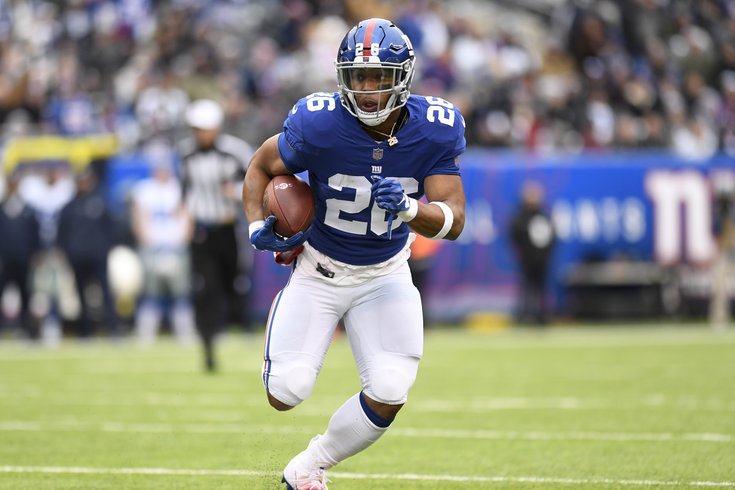 Saquon Barkley is an incredibly talented running back, but he has had no help at staying healthy from his offensive line.

There weren't a ton of injuries on Sunday, but there were a select few big ones (like Saquon Barkley's) that may have a huge and lasting impact.

Barkley was a top 4 pick in pretty much every fantasy draft a few weeks ago — going No. 1 in a fair number of them — and he was seen on crutches and a walking boot following New York's win over the Bucs. Here's a quick look around the league at some important fantasy football-related injuries, including Barkley, and the latest on each:

Barkley posted just 5.7 fantasy points this week — his owners will surely and painfully know — before exiting Sunday's win with a high ankle sprain, which happens to be an injury the running back had once already back at State College. With PSU, he missed missed just two games with the injury, which is a relatively good sign for the Giants this time around. However, NFL insider Ian Rapoport warns that the second year star will likely be out for the "foreseeable future," a word choice that doesn't exactly inspire confidence for a speedy return.

MRI revealed Giants’ RB Saquon Barkley suffered a high ankle sprain that could sideline him anywhere from 4-8 weeks, per source. Longer timeline is considered more likely; the Giants have a bye in week 11, which could give him eight weeks to recover and return for last six games.

Wayne Gallman will be the next man up for New York, though the Giants have not run the ball particularly well at all this year. Still, he's worth a look on the waiver wire.

Edelman had a pretty big game before exiting Sunday with a rib injury — and with the game fully in hand there was no point in risking things. For what it's worth, Tom Brady seemed optimistic about the setback earlier Monday:

“He’s one of the best players who has ever played for this organization,” Brady said. "I love being out there with him and if he’s not out there the offense takes a huge hit. Hopefully he can be out there as soon as he’s healthy and ready to go.”

“He’s a tough guy. Jules, I have been around a lot of players, I mean there’s very, very, very few guys who have Julian’s toughness. I don’t know exactly what all the reports show. I think today and Tuesday are good indicators of that. He’s tough.” [MassLive]

Hilton was questionable heading into Sunday with a quad injury, and despite having a big game in a win over the Falcons, the wideout says he re-aggravated the injury. So again like last week, he'll probably be a day-to-day situation worth monitoring closely.

According to reports last week, Jackson is still expected to miss Thursday's game in Green Bay with an abdominal injury after missing Philly's Week 3 loss to the Lions. Jeffery, on the other hand, has a chance of playing as he rehabs a lingering calf injury. He was listed as questionable on Friday's injury report which is an indication that he did have a chance to suit up. He's a sure gametime decision so have a back up plan in mind.

Doug Pederson said hes “opportunistic” that Alshon Jeffery could be ready to play against the Packers. #Eagles

Filling in for injured Damien Williams, McCoy had two touchdowns after being limited in practice with an ankle injury. According to the RB, everything went well Sunday and he should be feeling healthy next week when the team faces the Lions.

The Pittsburgh pass-catcher left with a shoulder injury before doing much damage in the first half Sunday. His track record is not good: he's missed 26 NFL games due to injury during his career. We'll find out more as the week progresses but a new tight end on the roster is certainly in order for people who own McDonald.

A bit of a sneaky injury cost Penny Week 3, and according to Seattle head coach Pete Carroll, his hamstring injury isn't serious enough to cost him more time. He is expected to practice in full this week.

Hurns had a concussion in Sunday's loss in Dallas and remains there without the team as a precaution. He will likely miss some time.