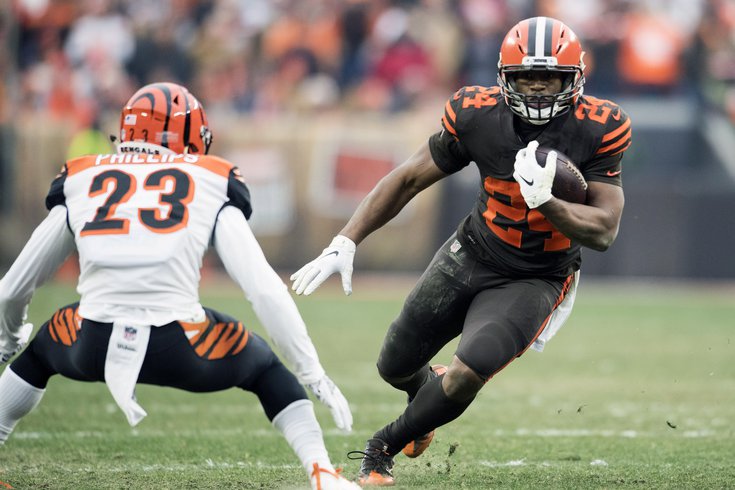 Nick Chubb has been lights out this season, and his injury is bad news for fantasy football players.

Typically on a Thursday, we'd scour the waiver wire and look for some useful pick ups to help you build and keep a competitive roster, but with the season just starting, we decided to take a deep dive into an underrated part of the fantasy football landscape.

If you don't have at least one rookie on your roster, you are missing out.

Every season more than just a few players jump into the fantasy forefront and become every day contributors. If you have a keeper in your league, taking chances on rookie ballplayers with bench positions is almost a must do.

Before we dive into this year's class, let's take a look at the last two years of rookie players.

It is simply astounding how many top notch fantasy players came from the last two draft classes and how under-drafted they were as rookies. Here is the 2018 rookie class and the ADP (average draft position, using yahoo's fantasy database for PPR) from their rookie year to now (most drafts have 12 teams and 15 rounds, so the rankings stop after 180 players):

With a few exceptions, almost all of the above players jumped double-digit spots in the draft from year to year, representing an entire round or more. And compared to the 2017 fantasy football rookie class, the 2018 class looks puny:

Finding them, of course can be dumb luck. You either need to waste valuable spots on your bench on a whim, or you have to wait until a player starts to break out and either get lucky on waivers or expend a ransom from your waiver pool of cash.

Regardless, based on the last two years alone, fantasy teams should all include at least one rookie flier every single season.

Shifting focus to this year's rookie class, just four of the top 26 projected rookie offensive players are owned by 90% or more of fantasy leagues this year. The list below could include the next Alvin Kamara, the next JuJu Smith-Schuster or the next Evan Engram.

If you have room to spare, now is the time to act. A player below will slowly start to round into NFL-playing form or could be forced into action due to an injured player. Getting in on the ground floor could be the difference between making a title run or missing the playoffs in your fantasy league. And — if your league has keepers — nabbing a player off the wire who breaks out mid-season (like Nick Chubb last year, who jumped from the 110th pick to the 8th in one season), could give you incredible value in your 2020 draft.

Here are this year's rookies and their ADP, as well as Yahoo's percentage of leagues that DO NOT have the player on a roster:

Yes, we know it is a lot riskier to take an unknown rookie than an established fantasy contributor. But padding the last few picks on your roster with big swings on rookies could be a lot more valuable than picking Adam Humphries or Kenny Stills to warm your bench.