Two people shot at Federal Donuts in North Philly; one of the injured is a 14-year-old, police say

The boy and an adult male were transported to Thomas Jefferson University Hospital; the store is located at North Seventh Street and Fairmount Avenue 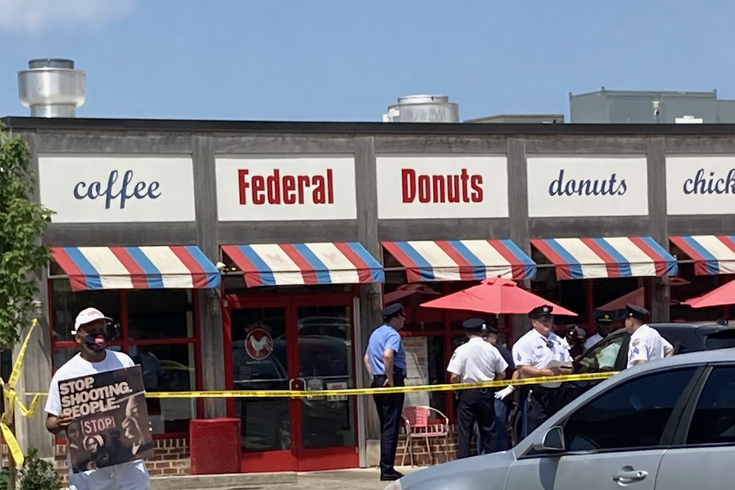 Two people were shot Thursday afternoon at the Federal Donuts at Seventh Street and Fairmount Avenue in North Philadelphia. One of the shooting victims was a 13-year-old boy, police said.

A 14-year-old boy and a 27-year-old man were shot Thursday afternoon at the Federal Donuts store in North Philadelphia, police said.

The shooting happened just after 1 p.m. at the popular doughnut shop located at the intersection of North Seventh Street and Fairmount Avenue, three blocks north of Spring Garden Street.

Philadelphia Police Commissioner Danielle Outlaw said Thursday afternoon that two gunmen chased the 22-year-old shooting victim into Federal Donuts and opened fire. Outlaw said it was not yet known why the man had been chased into the shop.

The teenager was shot twice in the left leg and was transported to Thomas Jefferson University Hospital in stable condition.

The 27-year-old man was shot multiple times and also taken to Jefferson. He is in critical condition, police said.

Outlaw said a gun recovered at the scene is believed to belong to the 27-year-old victim.

No arrests have been made and no information was released about the shooting suspects. Authorities are reviewing surveillance footage from the store and the area to gather additional evidence.

At the scene, police had taped off the area in front of the store and blocked off Fairmount Avenue between Sixth and Seventh streets. As cars drove north on Seventh Street past Federal Donuts, a man stood in the roadway with a sign that said, "Stop shooting people."

We are so heartbroken over the incident at our North Philly shop yesterday. All of our love and our prayers are with the...

This story was updated to reflect that the teen shooting victim is 14, not 13, and the adult victim is 27, not 22, as police initially stated.