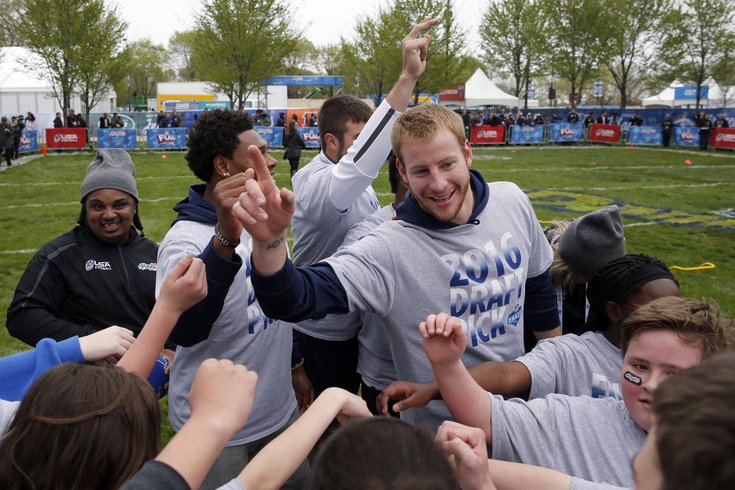 Draft day is here. We've done a bunch of Eagles-only mock drafts so far this offseason, but what we haven't done is a full 32-team mock draft, so here goes our first and final version...

It's been known (by some) for weeks that the Rams were always taking Goff with the first-overall pick. The first 20 minutes or so of the 2016 NFL Draft will be very anti-climactic.

Sam Bradford is gonna be so maaaaad.

Don't overthink it. Just go ahead and take the best player in this draft, and lock down Philip Rivers' blind side for the foreseeable future.

The Cowboys are delusional about how good their roster is, so they'll take a running back they think can put them over the top with Tony Romo's career winding down.

It feels like the Jags have needed pass rush help for a decade. Bosa will give them an edge presence.

This is a steal here. The Ravens gladly take a stud defensive back who played corner, safety, and even linebacker at times at FSU.

The Browns eschewed the chance to take Tunsil with the No. 2 overall pick when they traded back with Philly. Instead, they'll take another very good offensive tackle and have an extra three picks spread out over the next three drafts.

The Bucs selected a pair of offensive linemen with high picks last year in Donovan Smith and Ali Marpet after grabbing their franchise quarterback in Jameis Winston. They'll keep adding to the trenches here, hoping to build a strong OL for the long haul.

The Giants draft corners and pass rushers in bulk. While they are already paying a lot of money to Janoris Jenkins and Dominique Rodgers-Cromartie, don't forget that they selected Prince Amukamara when they already had Corey Webster and Aaron Ross, who were viable starters at the time. This is just what they do.

Floyd gives the Bears an athletic edge rusher in their 3-4 look, which they lack.

The Saints' defense is straight trash and has been for years. They need to begin to fix that in the trenches, and Robinson is an athletic specimen for such an enormous human being.

The Dolphins linebacking corps are bad, and Lee can be a speedy three-down player who is almost sort of a safety/linebacker hybrid, which are becoming more popular in the NFL lately. Also perhaps noteworthy is that Rob Gronkowski resides in the AFC East.

It's a complete guess on which doctors are going to be fine with Jack's knee. Minus his injury concerns, Jack is arguably the most talented player in the draft, and could be a potential steal here if his knee holds up. Khalil Mack, Bruce Irvin, Malcolm Smith and Myles Jack? Good Lord that'd be a scary set of linebackers.

Tennessee has selected wide receivers in the first round in three of the last four drafts, and yet, their leading wide receiver in 2015 had 411 receiving yards.

The Lions previously drafted Ndamukong Suh and Nick Fairley with high first-round picks, both they're both gone and Haloti Ngata is getting old.

Decker played LT and RT at OSU, and could give Atlanta a good bookend to pair with Jake Matthews.

Indy badly needs to upgrade their offensive line, and with the top four tackles off the board, they'll take the top interior offensive lineman in the draft.

Spence has major character concerns, but may be the best pure edge rusher in the draft. Rex Ryan will be the first guy to say "Screw it, I want him."

He won't play for a while, but assuming the Jets can bring back Ryan Fitzpatrick, Lynch can serve as an understudy for a couple years before taking over as the Jets' franchise quarterback, but he is a project.

The Redskins need help at every level of their defense, and Joseph is a mean, nasty safety who plays with bad intentions.

The Texans have DeAndre Hopkins, who is becoming one of the best receivers in the game. Treadwell gives the Texans a weapon opposite him who will keep opposing defenses honest.

The Vikings can run the ball and play good defense, but they don't have much in the way of weapons in the passing game. Coleman gives them a guy who can stretch the field and take the top off a defense.

The Bengals lost Mohamed Sanu and Marvin Jones in free agency. Fuller is an electric burner who can help keep attention away from A.J. Green.

Jackson is a pass breakup machine, and the Steelers don't have jack at corner.

Ragland is such a good player, but he's probably going to fall father than he should because he doesn't have elite athleticism.

Tambi Hali is getting older, and Justin Houston is a major injury concern going forward, so Big Red reloads with a new fastball.

***This is where the Patri*ts would have picked, but they were caught cheating. Again.***

There might be a temptation to draft a quarterback successor to Carson Palmer here, but with this Cardinals team being a legitimate Super Bowl contender, just go get a really good player and let him help you now.

Josh Norman out, a new CB in.

Dear Lord, I don't ask much of you, but if you can somehow facilitate a trade of Sam Bradford to the Broncos, with the Broncos then subsequently drafting a quarterback in the first round, you cannot deny that would be super funny. Thank you in advance, God. Love, Jimmy.