16-ounce packages available at select locations throughout the region 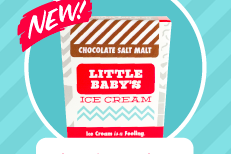 After an 18-month wait, the local company, which has a second brick-and-mortar location in West Philadelphia, announced the release of six flavors of the 16-ounce packages shaped like Chinese food cartons, the Philadelphia Business Journal reports.

Flavors on sale include vanilla cardamom cream and Earl Gray Sriracha, which will retail for $7.99 at initial locations in Pennsylvania, New Jersey, Ohio, Maryland, and Washington, D.C., according to owner Pete Angevine.

The company also received approval to sell the pints at Whole Foods Market, though a release date has not yet been set for those locations. Angevine aims to expand the offerings to comprise 30 percent of the business by 2017.

Little Baby's, which funded its pints through grants from The Reinvestment Fund and The Merchants Fund, is well known for its popular and distinctively strange YouTube videos, as seen in the example below.