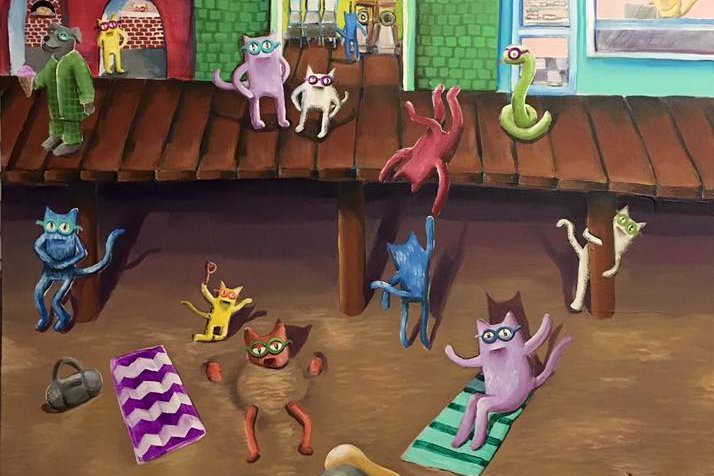 If you’ve been to Atlantic City over the past decade or so, you know the town’s No. 3 attraction — after the gambling and the shopping — is its feral cat population. Official estimates vary, but I’d guess there are somewhere between 50 and a million cats under the boardwalk there. At night, you can lean over the railing with your funnel cake and watch them fighting, frolicking and tending to their kittens. If you’re lucky, somebody will bring a laser pointer. Artist Sarah Mooney-Tronco was especially fascinated by the phenomenon and used it as a jumping-off point for “The Boardwalk Cats” — her new exhibition at the Ocean City Arts Center. Instead of hyper-realistic depictions of the cats in the dunes, Mooney-Tronco instead imagines a secret world where cats (and other animals) sit on chairs and sip coffee like people, or fly through the air like superheroes. It’s a wild take on an already wild situation. I had to find out how she arrived at the idea.

Tell me a little bit about you: Where are you from? What's your artistic background?

I'm originally from Warren, Pennsylvania. I really got into art in high school and went to Moore College of Art and Design, where I studied art education. 'The Boardwalk Cats' is definitely the largest series I have created. Prior to this, I've explored various styles and had a hard time focusing on one area — so it feels like a major accomplishment for me to have created this concentration of work.

What is it about the real-life boardwalk cats that inspires you?

They caught me off guard one day while I was running in Atlantic City. I stumbled upon a stretch of beach that was more like a litter box and then noticed a collection of cats under the boardwalk. I started noticing them more after I became aware of them. It was jarring to see a community of cats having their way with this area that experiences so much pedestrian traffic.

Did you hang out watching the cats for research?

I had a studio apartment on the boardwalk in Atlantic City for about six months when I first moved to New Jersey, so I was 'among them' for a while. I would keep my eyes peeled for groups of them under the boardwalk, mostly because I would get so excited to see them hanging out and comfortable with all of the other activity going on around them.

Do you have a favorite real-life cat?

My favorite cat is Simone. She's been with me for about eight years now; I got her when I was going to college in Philadelphia. She's been my buddy through a lot of major life transitions. I even have a tattoo — which I sometimes refer to as a cattoo — of her on my ankle.

Click on the pic to see a slideshow from Sarah Mooney-Tronco's 'Boardwalk Cats' exhibition.

In your paintings, you imagine these cats with interesting secret lives. Why is that?

The whole series evolved from a doodle I made a few years ago. The cats seem comfortable existing near so much human activity; I guess I started to play with the idea that they have their own world that parallels our own. Inventing stories about the cats gives me another opportunity to be playful. 'The Boardwalk Cats' series is very fun for me, and I feel like I get to interact with this bizarre world of saturated colors and characters.