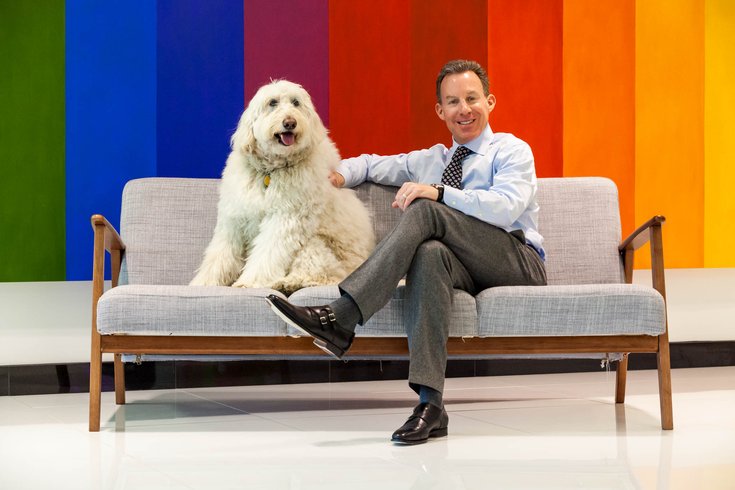 Michael Salove and his dog Zara.

If there's a buzz-worthy retail real estate venture going down in Philadelphia, chances are Michael Salove is behind it. The man behind MSC Retail has his hands in everything from the hottest new restaurants to whatever big development is hitting the city's college campuses next. From construction management to merchandising to place-making, they do it all.

But Salove isn't the only part of his biz who's known all over town. His pup, Zara, is a big fluffy dream of a dog who can often be found lying around the MSC offices.

Below, Salove dishes on exciting ongoing projects, his favorite parts of Philly and, of course, Zara's favorites too.

What Philly development project are you most looking forward to in 2016?

The best part about this question is that there is so much to look forward to in '16. I'm really excited about the former University City High School site which is being redeveloped as uCity Square. When complete, there will be in excess of six million square feet of mixed-use space integrated into a campus of retail, office, lab, residential and a K-8 school. I was fortunate to have been invited into the early planning conversation which ultimately resulted in an extension of the surrounding street grid rather than making the site an "island." This will result in a transformative and approachable offering that welcomes a large and diverse group of constituents that represents the totality of West Philadelphia. I have been a big proponent of this type of responsible thinking and am thrilled to see a property of this magnitude being so thoughtfully developed.

MSC Retail has worked with universities, retailers, restaurants, hotels – you name it. Is there a type of project you haven’t been involved with yet that’s on your career “bucket list” so to speak?

One of the challenges that we face in the retail silo of our firm is curating an interesting and unique stable of end users to work with. Back in the day, I would spend a tremendous amount of time traveling all over the country looking for cool concepts to bring to Philly. Retail has consolidated so much that most markets and offerings look identical which is really a shame. One of the most important tenets of MSC University is to work with one-of-a-kind retailers and restaurants to differentiate campuses. I would love to get involved in a project that only included cutting edge one-of-a-kind merchants. I saw one such project in California and it was the coolest thing I've seen.

What’s your favorite meal in Philadelphia?

This question always gets me in trouble with our clients in our hospitality division ... that said, I have been a huge fan of Dimitri's forever. The food is healthy, delicious and well priced. My go-to order is Greek salad, octopus and the snap peas. Pretty sure I have ordered that more than anyone else in Philly. You have a really good shot at running into Leslie and I at the one in Northern Liberties most weekends.

Everyone knows your adorable pup Zara! What’s her favorite spot in the city?

Funny...Z Dog is better known than me for sure. In addition to having her own Pinterest page and other social media stuff going on, she can be seen all over town. Her favorite spot is really anywhere where there are lots of people, she loves attention and will hang out all day with as many new friends as she can find. She also knows every store that keeps hound treats behind the counter, so our walks are led by her from store to store based on the snacks.

If you could spend a day with any famous Philadelphian, alive or deceased, who would it be?

That's a really big wish list for me and tough to narrow down, but I'll go with Edmund Bacon for the purely selfish reason that I would get a lot of mileage out of that conversation. I would have loved the opportunity to chat with the West Philly-born architect and planner about his vision (good & bad) that gave us the Philadelphia that I have spent my entire career and raised my family in.