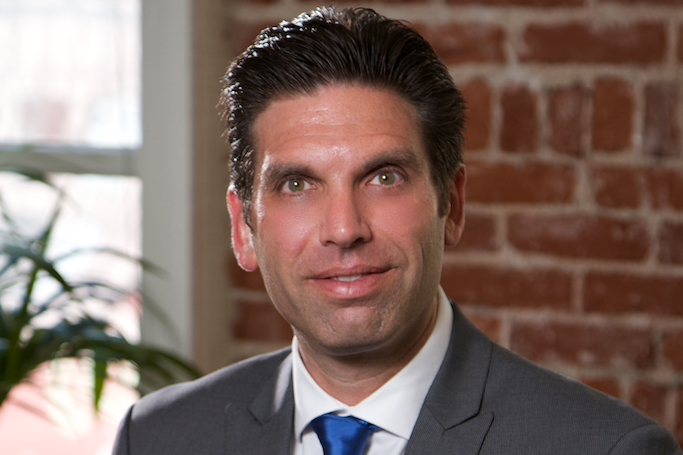 David Dinenberg, a Philadelphia area native, is founder and CEO of Kind Financial.

David Dinenberg grew up in Wynnewood, graduated from Lower Merion High School and spent many of his adult years as a real estate broker in Philadelphia. His life path veered in an unexpected direction thanks to a "60 Minutes" report about the nascent medical marijuana industry a few years back.

It was then that the seeds that would blossom into Kind Financial, a company that “provides seed-to-sale software and financial technology empowering the cannabis industry to transact safely, securely and in compliance,” started to take root.

With banks and credit card companies loathe to get involved with an industry just getting its legal feet under it, Dinenberg and his wife, Jen, sensed an opportunity, so they went west to California.

The years since have validated their decision, as 23 states and the District of Columbia have legalized medical marijuana.

PhillyVoice caught up with Dinenberg, 42, this week to talk about his path here, and what he sees for the future of medical- and recreational-marijuana legalization across America.

How did Kind Financial come to be, particularly how were you able to attract and convince people from such different backgrounds to get involved?

I was still in Philadelphia in October 2012 when I saw a "60 Minutes" episode that was the first I’d seen about the emergence of the medical-marijuana industry. During the episode, if you sneezed and coughed during the 15 seconds when they talked about it, you would have missed the fact that there were no financial services, no banking, no credit cards, no financial structure or backbone in the industry.

I turned to my wife and said it this makes no sense to me. At that point, [it was legal in] 16 states. … I really didn’t understand it. I’d say the birth of my company started that day. It initially started as a research project.

Because of my real estate background, I had really good connections, relationships. My wife and I worked up an executive summary of what we were thinking and shared it with a handful of people who we trusted most. They had never even heard of it, didn’t know it existed.

Did I have the answer at that point? No, but there were enough broad strokes to see the approach and what we wanted to accomplish. Everything started in Philadelphia: Raising the seed money closed in June 2013, at which point, my wife and I decided that if we were going to start our lives over, it made more sense to move the family to California. We’ve been here two and a half years now.

The people involved with this company are my proudest achievement. I’m humbled and proud of where we are in the marketplace. We have such a wide array of talented individuals here. From the ground up, they saw [an] opportunity. We were a start-up, so we were incredibly fortunate to have them believe in what we're doing. We've grown from six people – a family and friends nucleus – to 22 in May 2015. There’s an upward trajectory at this point.

What’s the inspiration behind the name?

Initially, it was called Kind Banking, but we changed it to Kind Financial in January 2015.

I like to call it a double entendre: High-quality marijuana is called “kind.” When people are talking about financial services and banking, they’re rarely associated with the word kind; you don’t hear it together very often.

So, it works very nicely together as a tip of the hat to the industry and what we’re doing, which is providing financial solutions to the legal cannabis industry through technology.

What are the legal concerns – considering federal law about marijuana – of being involved in cannabis-related business transactions? How do you decide with whom it’s OK to do business, as in, do you worry about people illegally growing in their basements and telling you they’re something like “Green Seeds Inc?"

We don’t touch the quote-unquote product, the marijuana, so it isn’t a concern along those lines. We’re working all over the country, not just in California, and we only deal with licensed businesses. The vetting process to become licensed involves a huge amount of due diligence. We are built on a foundation of compliance. We’re steadfast in that.

A lot of people in the industry came from an illegal market and some still like to do it that way. But, we deal with the licensed businesses. They’re going to be around as the rules and regulations get stricter and more rigid. We, and they, are set up for the future, not just the present.

Who does this program help and what are the biggest struggles you face as the company grows?

Our products and services are geared toward a few different areas. Our [Agrisoft] Seed to Sale software is geared toward people in the industry: Growers, production facilities, dispensaries. For cash management, we have the KIND Kiosks. We have anti-money-laundering folks as we’re also a banking, consulting and management company that works with banks. We have a government solutions division that deal with municipalities, states and foreign companies seed-to-sale.

We are very unique, in what we do. We have competitors in every one of our business lines, but we’re the only one that owns all the products under one brand. That’s really important. Our customers don’t have to call five different companies; they can just call one.

What’s your sense of how long it will take until marijuana – either medical or recreational – is legal nationwide?

I don’t think anyone truly knows that answer. It’s a huge topic of conversation in the country, where 57 percent say they’re in favor of medicinal marijuana laws. I don’t see the federal government legalizing it for recreational use, though.

I think this issue will be on the next President’s docket, not the first thing they’ll do, but something in their first term.

There’s a strong chance medical marijuana is going to being legalized, but not in 2017. Probably 2018.

It depends [on] who wins, though. [Presidential candidate Sen.] Bernie Sanders has legislation in front of Congress today, and if he were to win, the dates will be pushed up. The rest will take a slower approach. The loosening of FDA regulations. Possibly reclassifying it as a Schedule II drug. Banking laws. Recreational [marijuana] will likely stay a state-by-state issue.

Whether I thought this going in or not, I’ve learned so much in the past two years that I truly, truly believe in the medicinal value of marijuana. [CNN medical correspondent] Sanjay Gupta deserves a lot of credit for states pushing forward with this. You know the “Oprah effect?" Well, Sanjay has had a marijuana effect. Each time he’s had a special about it, more states have started looking at it. He’s very respected and he needed to be convinced of its benefits too.

If someone went into the Amazon jungle and found a plant, that person would come back out with it and it would be proven to be a “miracle plant.” People have used medical marijuana and they swear by it. I’ve heard their stories. It just takes time and an open mind.

It creates tax revenues and jobs. It’s safer than alcohol. What a lot of people miss is the fact that this is an agricultural industry. It’s a plant, the true definition of a cash crop.

We still have an office in Philadelphia and employees there. I’ll never forget where I came from. Some of my family still live there. I follow the politics of Pennsylvania very closely, and getting a law passed, whatever level it is, is very important. I think Pennsylvania will get a law on the books, through evolution, when people start to understand how it’s not really a big deal. I’m looking forward to that happening in Pennsylvania.