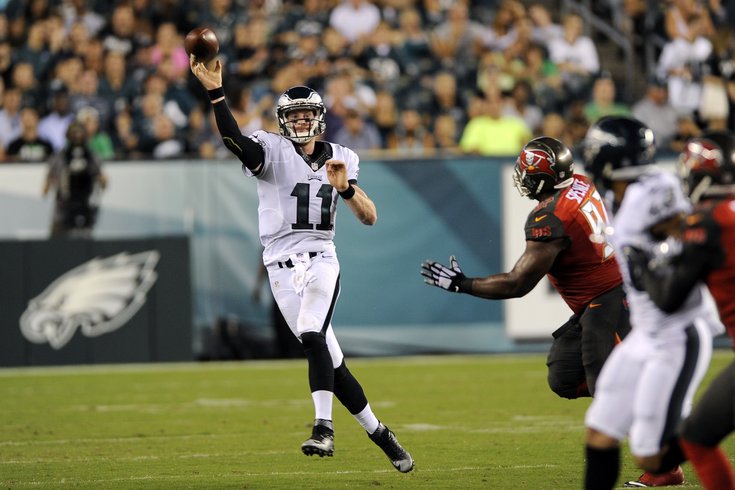 Carson Wentz during his only appearance of the preseason.

It's hard to believe that football season is upon us, but it's going to feel quite real on Sunday when Carson Wentz and the Eagles run through the tunnel at Lincoln Financial Field. Whether or not you'll still be excited about the upcoming season when they head back through the tunnel a few hours later remains to be seen. And given the change at quarterback just eight days before the opener, Doug Pederson's Eagles are likely to get a benefit of the doubt that was no longer extended to Chip Kelly in his final season.

This week, it's RGIII and the Cleveland Browns. But you don't care nearly as much about what they do. For Eagles fans, this week is all about No. 11, Carson Wentz, who is playing in his first NFL regular season game.

[If you didn't watch "Stranger Things" on Netflix, I apologize. Actually, no I don't. Go watch the show and you can thank me later.]

With that in mind, here's a look at five Wentz-specific over/unders for Sunday.

While I don't think Doug Pederson and offensive coordinator Frank Reich will lean too heavily on Wentz in the opener -- expect a healthy dose of Ryan Matthews and the ground game, which may or may not be effective enough to allow them to do so comfortably -- there's a good chance the rookie has a few red zone opportunities against the Browns. And with Dorial Green-Beckham and Zach Ertz as a pair of nice, tall targets near the goal line, finding the end zone isn't asking too much of the second-overall pick.

It should also be pointed out that they're facing a Cleveland team that allowed the third-most passing TDs a year ago. You never know when Darren Sproles might turn a routine screen pass into a touchdown. Not to mention Jordan Matthews, who scored six (of his eight) touchdowns over the final six games last season but hasn't played yet this preseason after injuring his knee early in camp.

And did I mention they're playing the Browns? I like Eleven's chances in this one.

The lone interception Wentz threw in just 24 preseason passing attempts wasn't entirely his fault -- he was hit as he released the ball, pushing the throw high and over his intended receiver. But after the struggles this receiving corps went through last season, we can't rule anything out from happening again on Sunday -- I'm looking at you, Nelson Agholor. The Browns will have a slightly better defensive backfield than they did a season ago. Joe Haden only played in five games for them last year, and Jamar Taylor appears to have supplanted veteran Tramon Williams as the other starter.

I'm still not sure Pederson will give his rookie enough chances or ask him to make the kind of throws that would lead to interceptions (more on that in a minute). However, I can't say that he'll have enough opportunities to throw for multiple touchdowns but not enough that multiple interceptions would be a concern. It doesn't quite work like that. Neither of the Eagles top two running backs -- Ryan Mathews and Sproles -- are what you would call a "workhorse," so eventually Wentz is going to have to make some throws.

It's hard to imagine him putting up numbers like Marcus Mariota did in his debut last year, but it's also hard to imagine him playing as poorly as Jameis Winston did in that very same game. Or maybe it's just that we don't want to imagine it. We'll have to wait until Sunday to see how Eleven responds to the bright lights of the NFL stage...

Luckily for Wentz, Lane Johnson is expected to play in the opener. How long that lasts is anybody's best guess. Last year the offensive line allowed slightly over two sacks per game. This preseason, they were slightly better than that at just under two per game.

That's what they're going to need to do if they want to keep Eleven from becoming shell shocked back there.

Wentz completed just 50 percent of his attempts in his only preseason appearance. But there were a few drops in there and it honestly felt like he played better than that. Pederson's a former quarterback, so I expect him to have some idea of what Wentz is going through and game plan accordingly. And when you add in the fact that his three best receivers -- Jordan Matthews, Zach Ertz and Darren Sproles -- all tend to run QB-friendly* routes, there's a good chance he improves on his preseason mark.

*They're typically catching passes over the middle or in the flats, not outside the hash marks deep down the field.

He's also really, really smart according to Reich, and this is one of the areas (knowing what throw to make) in which that should help.

The Birds finished the preseason averaging just 5.6 yards per attempt (tied for second-worst in NFL). And Wentz was worst of all at just 3.7 YPA. That's, uh, pretty terrible -- the league average last year was 7.1 YPA. Again, he was dragged down by some of the aforementioned drops and it's hardly a representative sample size.

Still, I think that 5.6 number is more indicative of the style of Pederson's offense. They aren't going to rip off big play after big play, especially with a rookie under center. So while I expect an improvement from Wentz, I don't think they're going to top 6.9 (nice).