Carson Wentz is super smart, rates a '9 or 10' on a lot of QB attributes, says OC 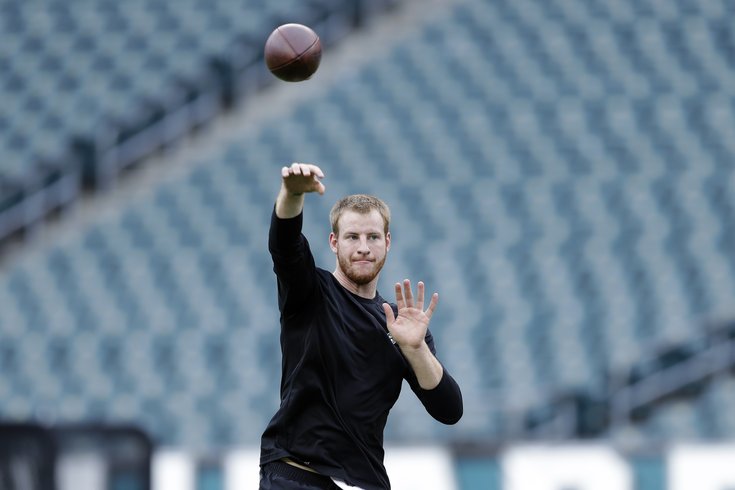 This is actually not an action shot. Carson Wentz is using Jedi mind tricks to make the football levitate in mid air.

Carson Wentz is big, athletic and smart. That would be the basic three-word scouting report on him (for those who liked him) when the Philadelphia Eagles drafted him second overall in the 2016 NFL Draft. He's so big, athletic and smart, according to Eagles offensive coordinator Frank Reich, that he rates as a "nine or 10" on a lot of quarterback attributes.

“When you look at and evaluate Carson, in the process, if there’s five to seven key boxes that you’re trying to check off, for a guy that can come in and be your quarterback, he checks off all the boxes,” said Reich. “Furthermore, if you’re scoring on all those boxes on a one-to-10 scale, he’s scores nine or 10 on a lot of those boxes.”

So what are those boxes, Frank?

“I mean, he’s 6’5, 240 pounds and he’s got very very good athletic ability for the position, or for any position. This is a big man’s game. This is a physical game. When you have that kind of athleticism and that kind of size, and then you work that along with very high grades in processing speed and intelligence, and then leadership, and play-making ability, and all those other X-factors, those are a lot of good things to check off."

So how smart is he, Frank?

“He is off the charts smart. I can’t emphasize how smart this guy is. I mean he is off-the-charts-smart, just plain smart. I mean, you know like smart smart. But then on top of that, the football IQ, and the acumen, is just way way high. Way high.”