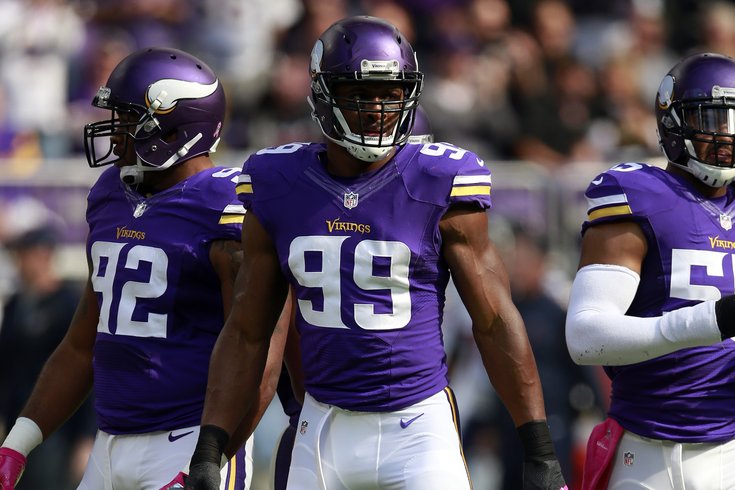 With four sacks in five games this season, Minnesota Vikings defensive end Danielle Hunter is tied with Everson Griffen and Brian Robison for the team lead.

Sam Bradford and the undefeated Minnesota Vikings are coming off the bye and looking to pick up where they left off against Carson Wentz and an Eagles team that's come crashing back down to earth in a hurry following a 3-0 start.

One loss from falling back to .500 on the season, the Eagles will not only have to overcome the NFL's best defense, they'll also have to contain the quarterback many thought would be starting for the home team on Sunday. And while it would be fitting for Bradford to be the buy to essentially hit the reset button on the Eagles season, Doug Pederson and his team don't have the luxury of concerning themselves with the opposing quarterback's past.

They need this win, regardless of who they're playing.

Here are five over/unders to keep an eye on...

That's the number currently being offered at topbet.eu, down slightly from earlier in the week. But honestly, I'm not sure it's down far enough. The Vikings haven't allowed more than 16 points in a game all season and lead the league in points allowed at a mere 63 through five games (12.6 points/game). But their offense isn't exactly lighting the world on fire. If you take away their four non-offensive touchdowns and their safety, the Vikings are only averaging 17.8 points per game.

The Eagles, meanwhile, rank third in the league in points allowed at 78 (15.6 per game). And even though they rank fourth in the NFL in points scored, they've averaged just 21.5 in their last two games. Furthermore, in their most recent loss to the Washington Redskins, the Eagles failed to score an offensive touchdown for the first time all season, instead getting 14 points from their defense and special teams.

Neither of these teams have done a lot in the way of turning the ball over this season, so those defensive scores and short-field situations that often lead to points may be few and far between. There's more wiggle-room when you take the over, but do you really see either of these teams scoring much more than 20 points?

As I just mentioned, both teams are good at protecting the ball on offense. And when you combine that with the fact that they've given up a combined 15 offensive touchdowns -- Eagles have allowed eight; Vikings have allowed seven -- through the first six weeks of the NFL season, it stands to reason that there's going to be a lot of bending-but-not-breaking from these two defenses.

Those types of games tend to include two things: punts and field goals.

Both of these offenses are capable of moving the ball against the opposing defense, but likely not for sustained periods of times and likely not without facing its fair share of third and longs. Controlling the middle of the field will be huge in this one, and the team that gets the most makeable field goal attempts is probably going to come out on top.

Seems obvious, right? Well, that all depends on what your definition of a makable field goal is, and in South Philly on Sunday, that may be up for debate...

Thank god there’s no chance of tomorrow’s Eagles-Vikings game coming down to a field goal… pic.twitter.com/rDXPUKZoVD

Still, there will be plenty of chances for both teams to settle for three. Remember, they don't have to make it in order for it to count towards this over/under.

The Eagles and Vikings have combined for 33 sacks on the season, meaning they combine for about 6.6 per game. However, both teams are pretty good at preventing sacks -- well, at least the Eagles were until last week when they allowed five against the Redskins.

If the Eagles don't continue to help Big V on the right side, Minnesota may get close to will get at least six sacks on its own. As for the Vikings, they've only allowed eight sacks all season, so it's hard to see the Eagles putting up a big number there, especially after they were held to none a week ago in Washington. That being said, I don't think they'll be blanked again this week, even if Bennie Logan doesn't play. Hell, maybe Conor Barwin will get his first sack since the opener.

Unfortunately, though, it's shaping up to be another long day for Carson Wentz.

Early, we covered why getting DGB involved would be smart for the offense, and could be a way to keep Wentz upright against the aforementioned (and still just as dangerous) Vikings pass rush. You can read more about that here. He's fully up to speed on the playbook. He is coming off a game in which he played a season-high 81 percent of the offensive snaps and was tied for second in targets. And he's a big, difficult-to-tackle target for the rookie QB.

After not allowing a passing touchdown in each of their first three games, the Eagles defense allowed five in the last two weeks. Sam Bradford's only thrown six touchdown passes in his four games this season, but with both of the Eagles starting cornerbacks listed as questionable, he may have the opportunity to add to that number. If the Vikings get down near the goal line, however, they may look to run the ball, something that's been lacking in the red zone without Adrian Pederson. But with Bennie Logan questionable, they may try to take advantage of that.

Even without Logan, the Eagles are strong enough up front to stop Jerrick McKinnon and Matt Asiata, at least enough to persuade Bradford to attack a potentially depleted secondary instead.

OVER (unless both McKelvin and Brooks play).