Five over/unders for the Eagles' Week 8 matchup vs. Bills 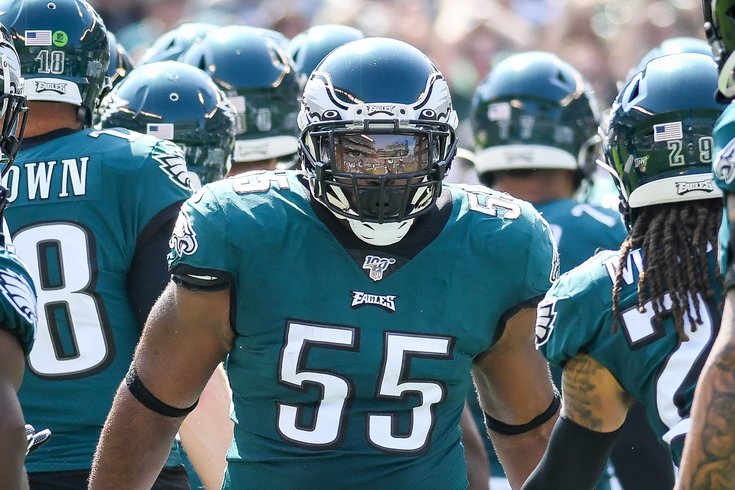 Let's be honest — watching the Eagles has not been a lot of fun lately.

Back-to-back blowout losses added to an endless stream of locker room drama will do that to a team. Sunday in Week 8, the 3-4 Eagles finish their three-game road trip (a trip that feels like it's lasted three times that long) in Buffalo against the 5-1 Bills.

While we can't promise the Eagles will offer a more entertaining product on the field in Buffalo, we can at least try and make it a little more fun by offering five over/unders to keep an eye on, as we do each week.

If you add the Eagles and Bills' season averages on offense you get around 45 points per game. They combine to allow around 41 points per game defensively (the Bills allow just over 15 points per game, the third best in football). It's a tough task to try and predict what kind of gameflow this one will have, as the Bills' five wins have come against some pretty bad teams.

Still, respecting the sturdy defense of the Bills and acknowledging the sputtering Eagles offense would lead one to surmise the under is probably the way to go in this one. The weather (rain and 20 mph winds) should also help keep this one low scoring.

The Bills are a decent team on the ground, relying on rookie Devin Singletary and veteran Frank Gore — along with some scrambling from QB Josh Allen — but they'll be facing one of the NFL's best rush defenses in the Eagles. Even after allowing Ezekiel Elliott to run wild last week the Birds still allow just 89.4 yards per game, sixth best in the league.

Buffalo rushes for 135.8 yards per game, seventh best in the NFL. One of these two units will succeed Sunday, but the Birds run-stuffing defensive tackles have been replaced by Fletcher Cox and two rookies picked up off of practice squads. They also are still without Nigel Bradham. Buffalo could wind up having success running the football.

The Bills' pass defense has been on point, as they allow barely over 200 yards per game from opposing quarterbacks. The Eagles D, on the other hand — with all their issues in the secondary — allow over 270 yards per game through the air. Just like with the run game, something will have to give Sunday. Will either team throw for over 250 yards? Without DeSean Jackson, don't expect too many big plays from the Philly side. Add in the sloppy conditions on the field due to the weather, and it's tough to see either team lighting it up through the air.

The Eagles had four turnovers against the Cowboys last week and have offered up the seventh most giveaways in football this season. Over the full season slate of games, the Eagles have averaged about the same number of turnovers per game that the Bills have created defensively. Two early fumbles all but ruined the Eagles' chances last week and you can be sure the emphasis this week has been to protect the ball at all costs.

We'll give the Eagles the nod here, assuming they can't possibly be as bad as they were in Dallas.

It's been a soap opera in this city this week, as it started with Lane Johnson calling out players for being late to meetings and the "leak" of a source who criticized Carson Wentz. The week ended with Orlando Scandrick bashing the Eagles on national television, specifically calling out Malcolm Jenkins, the defensive captain.

In between there was even more drama, with the team looking like it's at risk of falling off the rails if things aren't righted soon. There's no way the broadcast crew will be able to help themselves Sunday afternoon. Expect to hear about it a few times.