Fleeting foodies: why Philly's pop-up obsession is good for business

By Grace Dickinson
PhillyVoice Contributor
Restaurants Pop Up Spaces
from 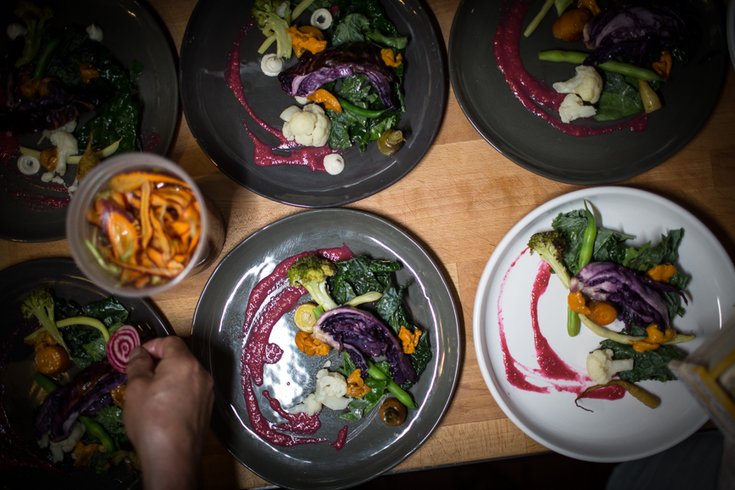 A tablescape from a Pelago pop-up event. The popular Filipino dinners will continue, but under a new name that has yet to be announced.

Philly loves food pop-ups. From bagels to beer gardens, it’s now easy to find one taking place during any given week and it’s obvious you needn’t be part of an exclusive underground world to attend. Now, from warehouses and shuttered schools, unorthodox dining experiences rival the traditional brick-and-mortar citywide.

So why are they showing up everywhere, and what can be attributed to their success? We asked several creators behind Philly’s pop-up productions to share their take on why pop-ups are in vogue – for both guests and the pop-up-preneurs themselves. Their answers speak to the traditional restaurant industry's faults and the merits of the maker lifestyle.

Creativity without the commitment

After years of hustling nights, weekends and holidays, many chefs want to throw in their conventional restaurant towels and march toward more freedom and flexibility.

“I’m in Austin right now seeing my newborn nephew,” said Ari Miller of Food Underground. “That’s time off I would’ve been paranoid to ask for at my old job.”

About a year ago, Miller left his position as a line cook at High Street on Market to launch Food Underground, now a two-man operation that hosts frequent pop-up and private dinners throughout the city. As the story goes with many chefs-turned-entrepreneurs, he found being able to create his own schedule appealing.

“There were friends and family I hadn’t spent nearly enough time with because I was devoting myself to the restaurant,” Miller said of his former career. “It just became clear to me that I needed to be doing something that allowed for that.”

Today, Miller finds himself continuing to execute dinner menus, but in a much different manner than before.

“There’s this creative aspect you don’t get from working at a restaurant where there’s one menu that you do faithfully and dedicatedly, day-in and day-out,” explains Miller. “With Food Underground, sometimes we’re doing a casual cheesesteak night down at the Garage, and the next night we’re doing a fancy networking dinner in a crazy nice apartment in Old City.”

Miller is not alone in being attracted to the variety that pop-up operations offer. 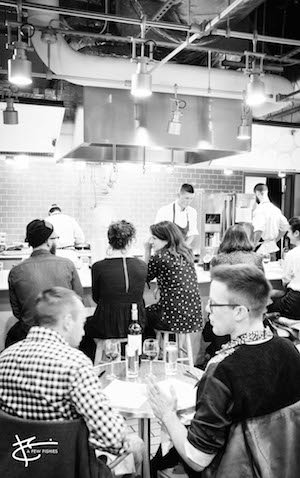 “You get out of the doldrums of kitchen life and you get a new experience every single time – all while being the master of your own destiny.”

It’s not just former restaurant workers that the sentiment attracts, either.

“After college, I did what I was supposed to do with my fancy finance degree – went to [work] in a cubicle. I quickly found out I wasn’t cut out to do that,” said Gary Burner, the other co-founder behind Food Underground.

“Now I’m wearing a million different hats and have no idea where I’m going to be in five years, which for me is the most exhilarating thing.”

And then there are the hobbyist hosts. The nature of pop-ups enables these individuals to carry out their passion for food without feeling like it has to be a full-time profession. Tony Montagnaro of W/N W/N, a cooperatively owned bar that hosts a monthly farm-to-table dinner series, would say he and his team fall into this category.

“We don’t have to all be there producing dinners every night, which allows us to be more spontaneous and enthused for when we do,” says Montagnaro. “It allows us to flex our operation a bit and feel like a restaurant, even though that’s not what we’re interested in doing all the time.”

For those who do want to be operating a restaurant day-in and day-out, funding can be a huge obstacle. Opening a restaurant bares a risk far heavier than a chef’s collection of cast iron pans, and it’s one many simply can’t afford to take on.

“A lot of people have the creativity and drive, but not necessarily the financial backing,” Rondinelli said, noting that it can take hundreds of thousands of dollars to get a restaurant started. 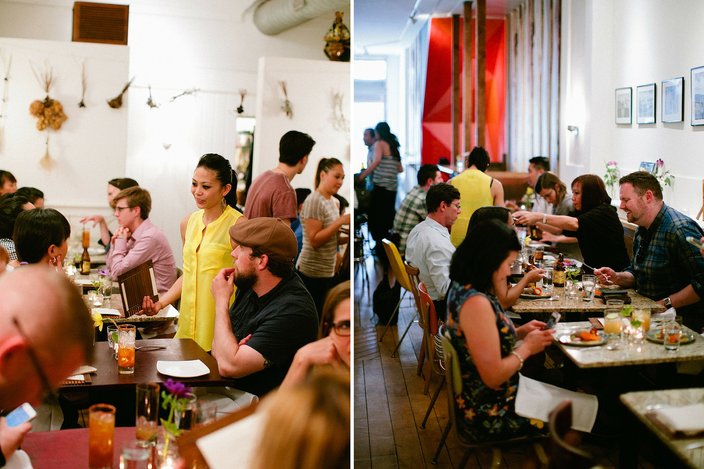 This was the case for Lou Boquila, a chef who, back in February, helped to launch a Filipino-inspired pop-up called Pelago. Boquila intended to turn Pelago into a permanent production and, using the pop-ups as a showcase to attract investors, it didn’t take long to do so. The series quickly grew itself a following and, in just a year, Boquila landed the funding he needed to carry out his dreams next spring. He’s currently working hard to open Perla, a 30-seat BYOB in East Passyunk, that will serve cuisine similar to that crafted for Pelago.

Without the initial cost of overhead, pop-ups simply present a lower barrier of entry for those who wish to stretch their creative culinary minds.

“You see so much press lately about the lack of chefs, and part of the reason is because there are now so many alternative outlets for serving food,” Miller explained. “Money in the restaurant world is often pretty crappy, so for those who have the urge to go out on their own and try something different, it becomes a question of ‘why not?’”

A generation of makers with a new way of thinking

“There’s a huge creative surge in Philadelphia. People are trying to make cool things happen,” Onna Hepner said. Hepner curates a monthly yoga and dinner series called the Yogi’s Table in Fairmount. “This generation tends to be one of risk-takers, willing to take ideas and run with them.”

Many also believe that a renaissance within the consumer market is enabling the growing makers community in Philadelphia.

“More than ever, people here are interested in trying things a little outside of the box and are embracing this idea of alternative space,” said Resa Mueller, one of the other members behind Pelago. (While Boquila has split off to begin his own restaurant, Mueller and two other team members plan to continue their pop-up series under a new name out of love for the experience.)

“Gone are the days where you’re dropping $600 on a meal at Le Bec Fin,” she said. “When you arrive at a pop-up, you get a really fantastically thought-out, creatively put together evening. And it’ll be more affordable in a space that’s likely entirely new to you. What better way to experience the city?” 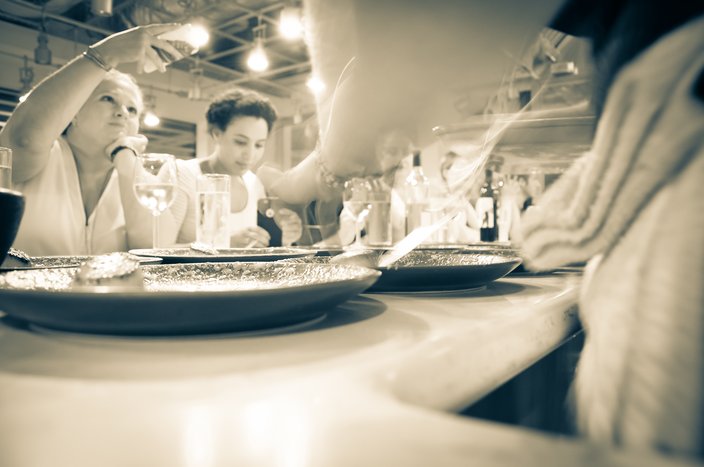 Diners at the Cooks' Canvas counter interact with the chefs while they plate Sydney Hanick's scallop dish. (Kristen Terebesi)

Hepner agrees, sharing that many of her clients tell her that it’s the surprise factor that draws them into events like hers.

“It adds an extra layer of interest for the consumer, while allowing cooks to execute their dreams in a way that didn’t seem feasible four years ago when Philly was primarily restaurants.”

That extra layer of interest generates experiences that are memorable – ones that many are dying to showoff to their friends. Some say these one-time events cook up a healthy dose of FOMO or the fear of missing out.

“In the Internet age, it’s something, to an extent, that everyone carries around,” W/N W/N’s Montagnaro said.

After all, if you don’t clear out your schedule to attend a pop-up on the night it’s taking place, you might never get a chance to do so again. And if your friends show up, they’ll make you wish you went, with their streams of photos that garner “likes” and “hearts” and have you already worried about missing the next one, too. While this can generate anxiety for certain consumers, it often brings in business for the pop-up-preneurs trying to attract a steady following. 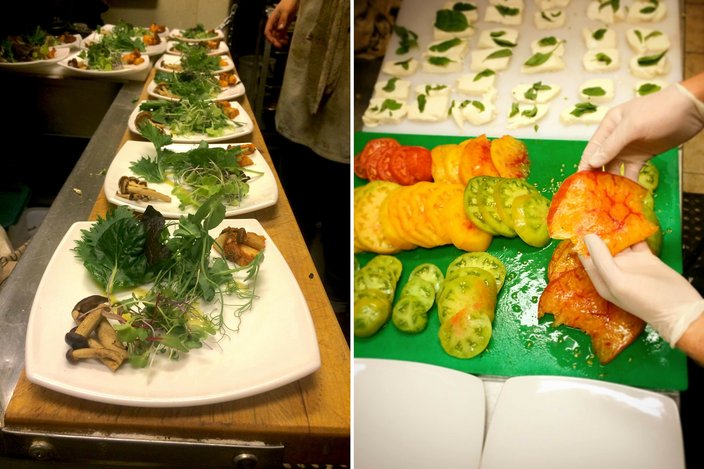 “We couldn’t have done our pop-ups without our strong social media presence,” Mueller said. “ If we had to use more traditional outlets, word-of-mouth would’ve never spiraled like it has.”

Rondinelli echoes this, saying, “It’s about building as much hype and chatter around an event as you can to get people to show up wherever you might be that night.”

All of the creators we spoke with agree that this, plus the unique customization that pop-ups allow, will only continue to grow the pop-up scene in Philadelphia.

“We’re not yet New York or San Francisco," Montagnaro said, "but we’re getting there."