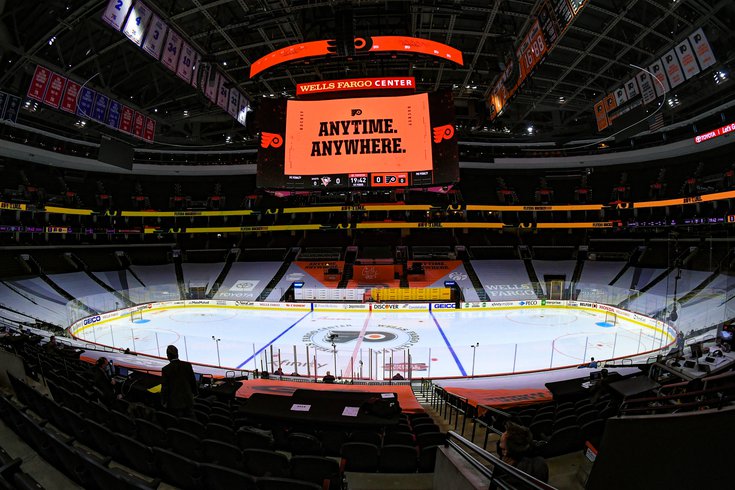 A look at an empty Wells Fargo Center prior to the Flyers' season opener against the Penguins in early 2021.

The Flyers made Brad Shaw's hiring as an associate coach official on Tuesday after his former team in Vancouver had already announced that he was leaving for Philadelphia last week.

Shaw was an assistant on John Tortorella's staff in Columbus and will be rejoining the Flyers' new head coach behind the bench to oversee the club's defense, which is in bad need of cleaning up after last season.

"The familiarity in working closely with Brad in the past and knowing his approach to the game will be a big benefit to our club," Tortorella said in a press release. "Brad's experience both as a former defenseman and the many years in the coaching ranks has allowed him to implement a style which makes his teams hard to play against while allowing players to thrive in their role."

Shaw, a former NHL defenseman of 12 seasons during the mid-80s through the late 90s, helped guide Tortorella's Blue Jackets to a shocking first-round playoff sweep of the Tampa Bay Lightning in 2019 — holding the Presidents' Trophy-winning club to just eight goals for the entire series — and then a team for the 2019-20 season that allowed the third-fewest goals in the league with 183.

Interim coach Mike Yeo, who Fletcher did express interest in wanting to retain following the end of this season, is moving on to join the Canucks' staff.

"We dealt Mike a really tough hand," Fletcher said at the beginning of May. "He's a good coach. I thought he did a really good job under the circumstances. He kept our players competing and playing hard to the end, made a few adjustments that we started to see some progress in, in particular, holding on to the puck a little bit more, zone entries, we were scoring a little bit better 5-on-5 at the end of the year.

"But we dealt him a tough hand all things considered."

The rest of John Tortorella's staff is still being formed.

The Flyers will begin their six-game preseason schedule Sept. 24 against Boston at the Wells Fargo Center.

The schedule, released Tuesday, is as follows

All home games will be at the Wells Fargo Center.