The Phillies' Thursday night game against the Nationals has also been postponed. 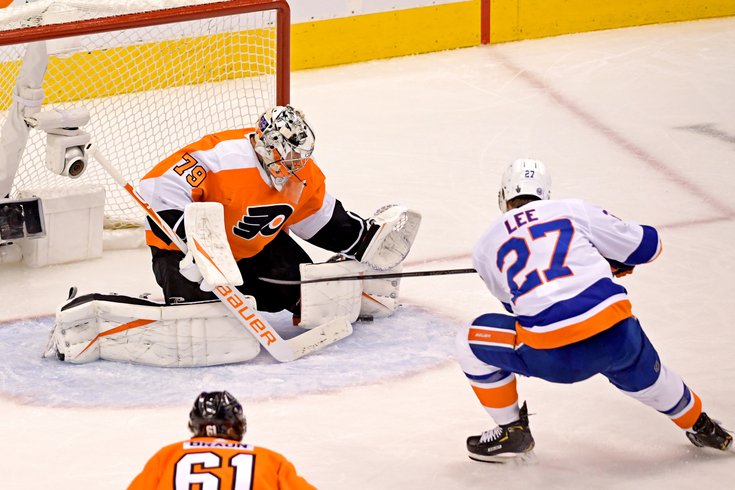 UPDATE [Friday, 10:10 a.m.] — After postponing all NHL games on Thursday and Friday, the NHL has announced their updated Stanley Cup playoff schedule. Here's a look at when the Flyers will now play:

There are work stoppages and walkouts taking place across the sports world as the nation continues to grapple with its ongoing police violence crisis. But don't tell that to Flyers head coach Alain Vigneault as he and his team prepare for a crucial Game 3 against the Islanders.

"I have no idea what's going on in the outside world." - Flyers head coach Alain Vigneault when asked about the boycotts/postponements/player strikes in other leagues.

Vigneault was asked if he had any thoughts on the decisions of multiple leagues to sit out last night, and if we should expect any kind of response from the Flyers for today's game. His response (for clarity's sake, he was asked a similar question last night and deferred): pic.twitter.com/BYTQX5iGwH

You can say that's what you want out of your head coach when he's trying to prepare his team for an important Eastern Conference semifinal game. It's also easy to forget that sports are entertainment, a game played by grown men that distracts us from our own problems. But some problems are too big to be ignored, and this is certainly one of them.

There are plenty of professional teams placing recent events ahead of (or at least alongside) their sports. Just compare Vigneault's comments to that to what's going on in his opponents' locker room.

Barry Trotz says his players are having a discussion about whether or not they'll play tonight. He believes the Islanders-Flyers game will go ahead but believes it's important for the players to use their platforms.

But soon, Vigneault might not have a choice but to pay attention.

On Thursday afternoon, reports started to trickle out of the two NHL bubbles that they might join the NBA and several MLB teams in their protests over racial injustice — specifically the police shooting of unarmed black man Jacob Blake in Kenosha, Wisc. — by canceling their playoff games.

The Hockey Diversity Alliance, comprised of current NHL players with a mission to end racial exclusion and intolerance at all levels of the game, put pressure on the league to postpone play on Thursday. It appears the NHL is listening.

We the @TheOfficialHDA have formally requested the @NHL to suspend all playoff games today. We strongly feel this sends a clear message that human rights take priority over sports.

NHLPA is conducting a call shortly to discuss the growing sense players favour postponing tonight’s games. Nothing official and more discussion required with the NHL. Should have final decision in an hour or two.

Players being told to prepare for cancellations tonight

Players in at least one #NHL dressing room have conducted a vote to not play their #StanleyCup game tonight.

Not even an hour later, the NHL and its players reportedly voted to postpone Thursday night's games.

No NHL games will be played tonight.

Sounds like the Hockey Diversity Alliance, w/ a strong push from Evander Kane & Matt Dumba, convinced players to take a step back. If you want to know more about the HDA, here's their website. Group was formed in June. https://t.co/LCA8GqpdcH

Players and teams involved are acknowledging there won’t be games tonight, however, it’s up to the NHL and NHLPA to formally postpone.

There is no word yet on when games will resume and how the schedule for the remainder of the Stanley Cup playoffs will be impacted.

UPDATE [5:12 p.m.] — According NHL reporter John Shannon, the NHL will resume play on Saturday. The Flyers were already schedule to play Game 4 of their series that day, so there's a good chance they'll be one of the teams in action the first day play resumes.

Hockey will resume on Saturday. #StanleyCupPlayoffs

The NHL has still not made any formal announcement about Thursday and Friday's games officially being postponed. We'll provide you with an update when it becomes available.

UPDATE [6:00 p.m.] — An hour before the Flyers and Islanders were scheduled to take the ice, the NHL officially announced the postponement of Thursday and Friday night's games. While they didn't yet announce when they would be rescheduled for, they said the four postponed games (two on Thursday and two on Friday) would begin being made up on Saturday.

The Flyers also released a statement of their own.

On Wednesday, the Bucks-Magic game was the first domino to fall, as Milwaukee players didn't take the court as a form of protest over the shooting of Blake in their home state. A night earlier, Kyle Rittenhouse, a 17-year-old from Illinois, drove to Kenosha with an assault rifle and shot several protesters, killing two, and was allowed to leave the area and return home before police arrested him without incident. This came at protests stemming from Blake being shot seven times in the back by Kenosha police, in front of his children and fiancé, and being left paralyzed from the waste down.

Following the Bucks decision not to play, the Magic also walked off the court in Orlando, and soon the entire NBA had agreed to postpone the playoffs. No games were played on Wednesday, and on Thursday morning they voted to postpone that day's games as well.

Several MLB teams joined in the protests on Wednesday night, including the Milwaukee Brewers, who play in Wisconsin, and the Seattle Mariners, who have more black players than any other MLB team. The Phillies still played their game against the Nationals, but they also cancelled their game on Thursday.

Hearing no game for Phillies tonight.

I'm told the Phillies' decision not to play tonight was made by players and not in concert with the Nationals players.

UPDATE [4:51 p.m.] — The Phillies and Nationals released a joint statement on Thursday afternoon about the players' decision to postpone the game.

They also hosted a joint press conference at 4:45 p.m. with both managers and player representatives from each team.

“I’ve been supportive of our players. We’re in this together. To fight for social justice and equality. We need to have love and hope. And we’re not doing a good enough job of it” pic.twitter.com/8xsV9Bw1K7