NHL Draft: The Flyers' odds at landing the No. 1 pick 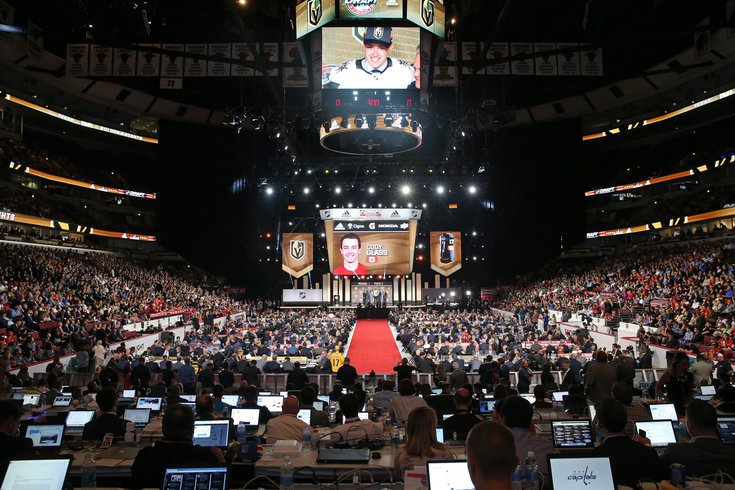 T-Mobile Arena in Vegas when it held the NHL Draft back in 2017.

In his end of season press conference on Tuesday, Flyers GM Chuck Fletcher talked about the "aggressive retool" the team intends to undergo over the summer.

In particular, he highlighted the role that youth and development are going to play in the process, including the high draft pick they'll have at their disposal in Montreal in a couple months — one of the few silver linings that come with a season as catastrophic as this one.

"We’ll have a pretty high pick this year that’ll be part of our team in probably the very near future," Fletcher said. "That’s got to be a big part of it."

Regardless of how the ping-pong balls fall next Tuesday in the draft lottery, the Flyers will get a selection from the top of the incoming 2022 class. It's just a matter of when that pick will be.

The Flyers finished the season with a 25-46-11 record and 61 points, and after Seattle lost its season finale to Winnipeg on Sunday, they were locked in as the league's fourth-worst team.

As released by the NHL once the regular season concluded, they'll have a 9.5 percent chance of jumping ahead to the No. 1 overall pick, sitting behind Seattle's 11.5 percent chance, Arizona's 13.5 percent, and league-worst Montreal's 18.5 percent odds at getting it.

Because of a rule change to the lottery format, where teams can only jump a maximum of 10 spots up, the furthest the Flyers could slide back on the draft board is from fourth down to sixth.

Here's the full look at the 16 non-playoff teams' chances of getting the No. 1 overall pick:

Then there are the odds for the Flyers landing anywhere 1-6, as projected by Tankathon. (Note that if the Flyers do move up, it'll be to the No. 2 overall pick at minimum.)

So what can they do with that?

Should the Flyers jump up to No. 1, the consensus top pick all season has been 18-year old Shane Wright out of the OHL. The 2022 draft class is generally considered to be a weaker one, and Wright isn't projected to be the type of game-changer that Connor McDavid and Auston Matthews are. But he has shown to be an exceptional playmaker in juniors thanks to a combination of incredible vision and anticipation, and at the pro level, knowing when and where everyone is going to be is a major advantage.

The likelihood, however, is that the Flyers will land elsewhere, and they'll have a fair share of options to consider.

Personally, I think they should prioritize high-end offensive talent since the team as it's constructed now severely lacks offensive punch.

Last month, we highlighted two center prospects that should be able to help in that regard: 17-year old Logan Cooley out of the US National Development Program and 18-year old Matthew Savoie out of the Western Hockey Hockey League.

Both prospects are highly-touted skaters — NHL Central Scouting has Cooley as its No. 2 ranked North American skater and Savoie at No. 3 — and both possess a skillset and approach to the game that, so far, has meant one thing: When either is one the ice, the puck is heading toward the other team's net.

Cooley, a Pittsburgh native who Tankathon projects the Flyers landing at No. 4, gets it done with quick skating and even quicker thinking. Savoie gets it done with shiftiness, blazing speed, and a wicked shot.

Other options expected to be within the top 6 include big forward Juraj Slafkovsky out of Finland's Liiga, and Slovak defenseman Simon Nemec, who's projected as the top blueliner in the '22 class.

There's a lot of work for the Flyers to do over the summer if they want to climb back into relevancy. But first they'll have to see where the ping-pong balls fall next Tuesday.