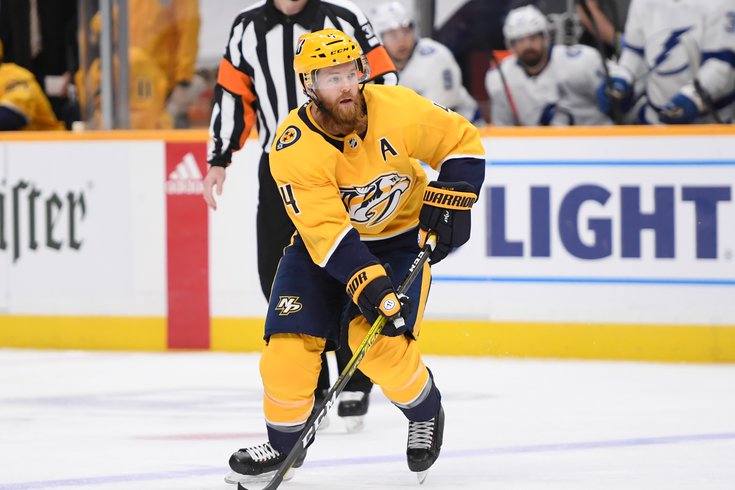 The Flyers finally made their move.

Ellis to PHI for Philippe Myers and Nolan Patrick. Patrick is going to Vegas for Cody Glass https://t.co/I9sxL4TLmV

Clearly, the underachieving Flyers saw their biggest weakness this past season at the blue line, allowing 37 more goals than they scored and more often than not, leaving young goalie Carter Hart out to dry.

Ellis had at least 25 points in seven straight seasons prior to the shortened 2021 campaign, one that saw him collect 18 points in 35 games. A year prior, Ellis had 38 points in just 49 games. But the offense is just a bonus. On defense, Ellis has had a positive plus/minus for the last eight seasons in a row — a combined +114 for his career, all with the Predators. Only Ivan Provorov had a positive plus/minus on the blue line last year for the Flyers (his likely first line partner).

He also brings a postseason pedigree, having appeared in 74 playoff games in Nashville, netting 38 points in them. His contract carries six more seasons on it, with a $6.25 million cap hit for each.

Patrick won't stay in Nashville, as he is reportedly being flipped to Vegas.

Nolan Patrick then getting flipped by Nashville to Vegas for Cody Glass https://t.co/rQVIrK8udA

Patrick seemed to want out of Philly more than the Flyers wanted to bail on him, as his reported trade requests were a storyline at the end of the regular season.

He was a disappointment during his time in Philadelphia, dealing with injuries and consistency issues, and a change of scenery could do him well in Las Vegas. He is still just 22. Myers, who never really carved out a role in Philly, is 24 and had 11 points in 44 games last season (with a -10 plus/minus).

That the Flyers are shedding youth and bringing in a stud veteran defenseman is a key sign that Chuck Fletcher and the front office are tired of waiting to get good. They want to be good now. We'll see if this is the first of many potentially transformative moves with the Seattle expansion draft on the horizon.