Which Flyers players would fetch the biggest trade return if Fletcher shakes up roster?

From Claude Giroux to Travis Sanheim to James van Riemsdyk, Philly will have deadline options if they want to be sellers. 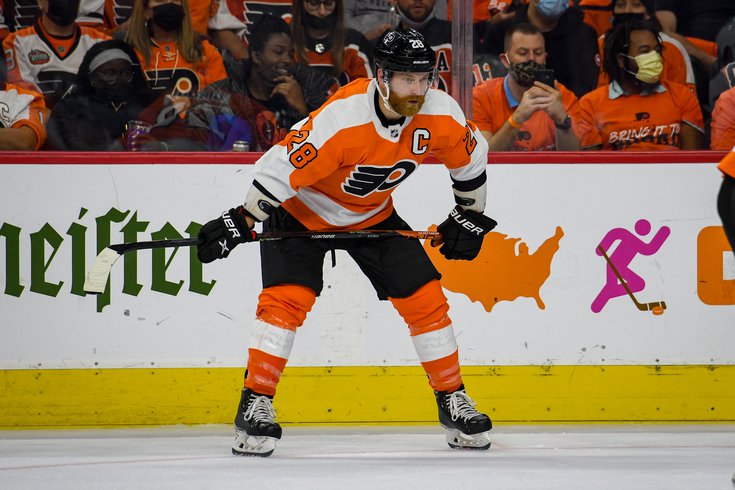 The Philadelphia Flyers find themselves in a precarious situation. A third of the way into the season, they see themselves near the basement of the Metro Division with an interim coach in Mike Yeo after firing Alain Vigneault and a roster that has been struck hard with injuries.

As we continue to navigate through the season of giving (and receiving), many eyes will begin to look at what the Flyers might do at the deadline. There's still plenty of time to go in this season and enough games remaining to right the ship, but no matter what happens from now until the March trade deadline, it seems likely that general manager Chuck Fletcher will have to make a move.

Whether it will be as a buyer or seller remains to be seen, but if it's the latter — which appears to be the more likely course at this point — Fletcher will first have to figure out which of his pieces can bring in the highest value, which guys are (and, more importantly, aren't) a part of the future, and which players he deems untouchable.

Sticking with the latter, coming up with a list of guys who Fletcher will not field any calls for or bring up their names in trade discussions, wasn't easy. At the top, though, would be Carter Hart. He's a young goaltender who this franchise is building around. They just signed him to a new deal and his play this season has been impressive.

After him it gets a little more unclear, but there are likely three — and only three — players that fit the bill of being "an untouchable." That would include Sean Couturier, Ivan Provorov and Joel Farabee. For various reasons, these three all figure to play a large role for this team moving forward, whether as a top-pair defenseman, a homegrown goal scorer or a perennial Selke Trophy candidate.

Outside of those four names, anyone else is up for grabs when it comes to looking for a solution via trades. So who among the non-untouchables list offers the best value for Fletcher to utilize in discussions?

Let's breakdown a few options on a scale from 1-10, with 1 representing the least value and 10 the strongest return possible...

It doesn't feel right to discuss The Captain playing in another city, but there's a chance this could happen. And if it does, it probably would net the Flyers their biggest return.

Giroux will hit his 1,000th game with the Flyers a few weeks before the deadline. As Frank Seravelli of The Daily Faceoff theorized, once he hits that milestone he may be more inclined to waive his no-trade clause in favor of playing for a Cup contender. He'd also have the opportunity to return to the city in the offseason as a free agent if he so chooses.

A playoff contending team would see value in bringing in a Cup-hungry veteran with his playmaking ability. He'd surely be among the biggest names available on the market and would be a major catch for his next club. Being that he would more or less be a rental, what the Flyers would get for him may not be his full value (which is the only reason he's not a 10/10), but it would certainly be worthwhile for Fletcher in his efforts to rebuild the team.

Last deadline, a player like Jeff Carter netted Los Angeles a third- and fourth-round pick and Taylor Hall brought in a second-round pick and another player for Buffalo. Giroux’s return likely would be more than any of those moves, especially for a team who feels they’re one playmaker away from being a finalist.

A 24-year-old should net a team a nice return, but I'm not entirely sure Konecny would. He's on a 46-point pace, which is right on pair with his previous full seasons, but no where near his 61 points in the shortened 66-game 2019-20 season.

It's that version that Flyers fans have hoped to see return but have yet to see in any consistent fashion. He's under contract for three more years so any team looking at him would appreciate having him as more than just a rental.

What makes his value a bit lower than maybe it should be is that he was a first-round pick for this club not too long ago. He won't get back a first, and probably not a second. He's prone to lengthy goal-less droughts and when he's not producing offensively, he doesn't offer much else. A trade of Konecny would likely need to be part of a bigger package to spruce up a deal for a win-now type player in return.

Sanheim has regained his confidence after a shaky 2020-21 campaign. While I don't believe his name will be one the Flyers shop a lot, it certainly won't be off when it comes to other teams looking for pieces.

The 25-year-old has good years ahead of him and still has some untapped offensive potential that he displays in flashes. He'd fit on pretty much any team, particularly one that's on the cusp of having a young core take the next step.

A former first-round pick, Sanheim would only be traded if it was in a package for a big fish. Think of someone like Arizona’s Jakob Chychrun, who is rumored to be available and would be an instant top-pair defenseman in Philadelphia.

A player many fans believe will be traded, van Riemsdyk actually has more value than some think.

A contending team would find him useful on their second or third line and more importantly as a piece of their powerplay, where he has excelled in his career. The issue with van Riemsdyk is his contract, so if Fletcher wants to make changes he’ll need to shed himself of that similar to what he did with Jake Voracek and Shayne Gostisbehere.

There was a belief van Riemsdyk would have been selected by Seattle in the expansion draft this past offseason but that turned out not to be the case. He's come on as of late but it does seem his time here is nearing an end.

How could the Flyers trade Ristolainen less than one season after giving up so much for him? Moving the former Buffalo defenseman is unlikely, as I do believe when Fletcher traded for him he had visions of him being a staple for this organization moving forward.

Yet, similar to Giroux in that if this team is at the basement come March with little to play for, it may make sense to go full rebuild and move Ristolainen in hopes of recouping a first-round pick.

The way he's played this season has been a welcomed sight here, but Fletcher will need to determine if the soon-to-be free agent wants to re-sign in Philly and risk being part of another team going through a rebuild. If Ristolainen doesn't express an interest in coming back, Fletcher would be wise to move him for whatever he can get.

Again, this one is unlikely unless the team is completely out of it and Fletcher has to start thinking 2-3 years out.

Yandle, who signed late in the offseason on a minimum deal, really hasn't offered much to this team. He came as a powerplay expert but hasn't done a whole lot there and is a liability in 5-on-5 — and he's essentially a lock to be in the lineup no matter how he's playing because of his nearing Ironman streak, which he will hit ahead of the deadline.

Once that feat is accomplished, there's a small chance Yandle could be dealt. It truly all depends on where this team is at and how much Fletcher would value something like a sixth- or seventh-round pick in exchange for Yandle rather than keeping him around the locker room as an extra seventh defenseman.

Truthfully he'd probably provide more for the team finishing out his contract as more or less a player-coach with someone like Cam York taking his place rather than a very late draft pick would.

These are the top two most prized pieces for the Flyers in the pipeline. Frost, who was called up last month, has plenty of untapped playmaking ability. York is projected to be a top-pair defenseman in the not-so-distant future, or at least a very good second-pair blue liner.

These two former first-round picks are a part of Fletcher’s future. Moving them wouldn't be for just anything. A trade involving one or both of them would likely mean the Flyers clawed back into the playoff race and are entering buyer’s mode.

That would mean they'd be involved in a move for someone like Vladimir Tarasenko, Filip Forsberg, the aforementioned Chychrun or another high-caliber player.

There's no reason to speculate on any of these two being moved but rumors will begin to run rampant come late February into March if the Flyers are closing in on a playoff spot and one big name player away from making a Cup push.