Alain Vigneault needed to go, but Flyers problems run much deeper than just the coach 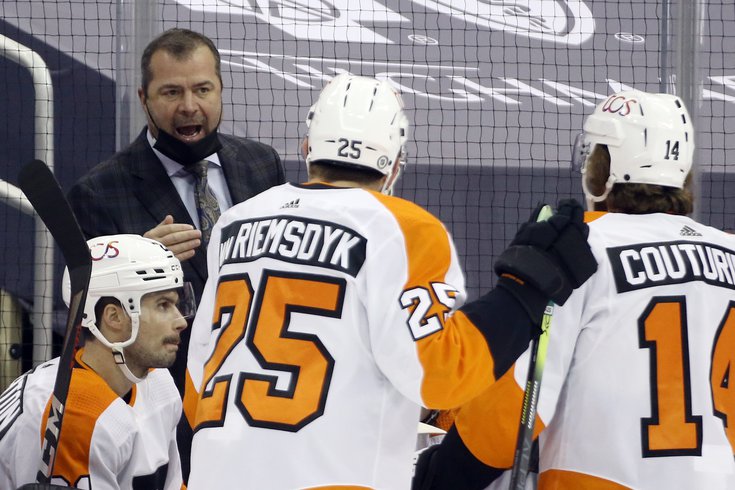 Alain Vigneault came into Philadelphia as a coach known for taking veteran-laden teams and propelling them to the next level. Unfortunately as the Flyers head coach, he never was able to deliver on that promise.

The Flyers parted ways with Vigneault on Monday morning following an embarrassing 7-1 loss at home to the Tampa Bay Lightning, extending their losing streak to eight games.

For Vigneault, he never was able to sustain success with his fourth NHL franchise. He flirted with success briefly in his first year on the job, but ultimately it came crashing down over the last two seasons with a lot of blame being placed on him and his coaching staff’s shoulders.

So went wrong for a guy with so much pedigree?

In Vigneault’s defense, he never was granted a full 82-game season in his three years in Philadelphia. But neither of the 31 other coaches have had one in that same span, so that becomes a moot point in the grand scheme of things.

Vigneault took teams in Vancouver and New York that were loaded with veteran talent with the likes of the Sedin twin with the Canucks and the slew of talent he had with the Rangers. He was backed by strong goaltending in Roberto Luongo and Corey Schneider, followed by Henrik Ludqvist.

He had all of that with the Flyers. Claude Giroux was and is a top player over the last decade. He inherited a team with a perennial Selke finalist in Sean Couturier, a playmaking Jake Voracek and a handful of other experienced players rounding out the top six and beyond. Carter Hart wasn't at the level of goalie pedigree as his past netminders, but he is among the best young goalies in the game.

Vigneault had the pieces he needed. He even had more thrown at him this offseason with names like Ryan Ellis, Cam Atkinson and Rasmus Ristolainen coming to town. Yet, things somehow got worse.

His tenure in Philadelphia sees him at 74-54-19. Where things went south was after the NHL bubble playoffs. That was where the Flyers wound up securing the No. 1 seed following a round-robin format. They won a playoff round before exiting, but it was a step in the right direction for his club.

From that point on, Vigneault never could get his team going in the right direction again. In the 78 games since the opener last season, the Flyers are 33-33-12.

General manager Chuck Fletcher sought to restock the cupboards this offseason to give Vigneault a real shot at redemption. What Vigneault ended up doing was leading a sinking ship to the tune of an 8-10-4 mark. His club failed to score more than three goals in a game in 17 straight games. The powerplay was historically bad, scoring just four times on the man advantage since Nov. 1, tied for the fewest in the NHL.

It just seemed that the message he was trying to deliver was continually falling on deaf ears. The same issues that plagued them last season began popping up after the first few games of this year. That 17-game stretch of offensive ineptitude saw very little change from a systems standpoint. Vigneault just couldn't figure out the solution for whatever was ailing this team, and it ultimately cost him his job.

What the Flyers and Fletcher decide to do next remains to be seen. Mike Yeo will be the interim coach, beginning with Monday's game against the high-octane Colorado Avalanche. Bruce Boudreau was the biggest name on the market but he was scooped up while the Flyers were playing on Sunday by Vancouver. Frank Seravalli of Daily Faceoff surmises that Rick Tocchet will be a name high on their list.

No matter what direction the organization goes with its next coach, what can't be swept under the rug is blame on the players. After all, this core has seen up to seven different head coaches — and four since the start of the 2014 season. Coaching is important, but what transpired on the ice also falls on the players’ shoulders.

The Flyers have become an easy team to play. Scott Hartnell put the team on blast during an appearance on NHL Network last month. And he wasn't wrong. There's talent on this team. There are also guys who were here that are doing very well with their new clubs. What needs to change is deeper than just a coach. There's a lack of an identity right now with this organization and it's having a negative impact all across the board.

Whoever takes over as the 22nd coach of this franchise will have a tall order ahead of them. There's a starving, disgruntled fan base that is dying for success. There are a lot of pieces that just don't seem to quite fit together that need to be solved. And there are cap issues that the general manager will have to navigate.

As for Vigneault, he was unable to fix any of the above issues. He took over a broken team in the aftermath of Dave Hakstol and leaves behind a team that somehow may be in the exact same position, if not worse.