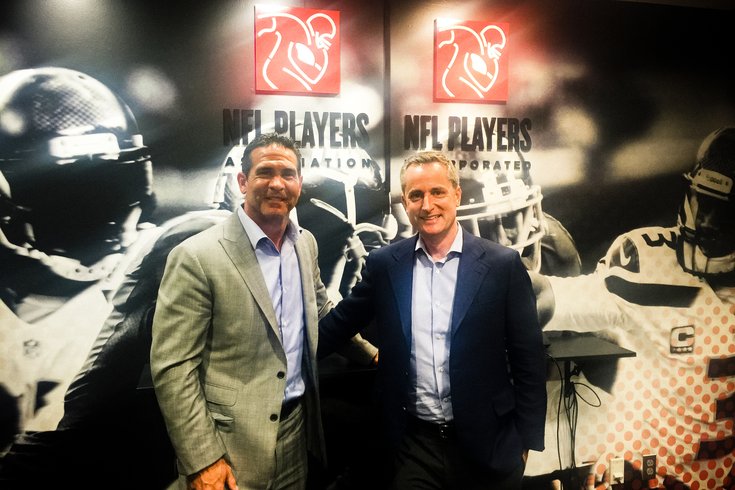 Dr. Sam Browd sat behind his desk, shook his head and sighed. The Seattle-based pediatric neurosurgeon was lamenting a day in August 2013 to his friend, Dave Marver, about the rising number of football-related concussions among young players, and how it was a shame many of those kids wouldn’t play again.

And that’s where it started – with a simple conversation between a couple of guys who love football.

It set into motion a brainchild that could offer a solution that may greatly alter the number of concussions in a sport that right now needs to do some serious damage control. A conglomerate that includes Marver, Browd, PhD Per Reinhall, and former South Jersey football star Bill Osborn have grouped together to form VICIS, Inc., a company whose mission is to resolve football’s growing problem and create a revolutionary high-tech helmet called “Zero1.”

What’s more, Marver, Osborn and the VICIS group have a legitimate hammer in their hands — the NFL shield. In November 2014, VICIS was one of seven winners in the Head Health Challenge II, sponsored by the NFL, GE and Under Armour. Seattle-based VICIS and its partner, the University of Washington, will receive up to $1.5-million. They were selected out of over 500 applicants from 19 countries, according to the NFL.

Marver has over 20 years of experience in the medical technology industry. Osborn is a football lifer, who starred at Wildwood High in the early 1980s, then at Pitt, before playing briefly in NFL Europe and arena leagues and served a few years as a scout for the Kansas City Chiefs. He has a deep medical sales background himself, having worked closely with Marver when the two were together at Medtronic, one of the world’s leading medical technology and service companies. When Marver came up with the idea to build a new helmet, he thought immediately about getting Osborn on board.

"We’ve completely reimagined the football helmet, leveraging contributions from the best and brightest thinkers in mechanical engineering and neurological surgery," Marver said. "The result is a product that is performing exceptionally well in impact testing vs. current market-leading helmets."

“It’s a funny story how Dave and I first met,” Osborn recalled. “I was working with Ethicon (a subsidiary of Johnson & Johnson) at the time when a recruiter reached out to me about a company called Medtronic. They wanted me to meet this guy named Dave Marver. I was scheduled to meet Dave at the Northwest Club out at the Philadelphia airport, but the recruiter messed up the day we were supposed to meet. I was getting ready to walk into the gym and work out when the recruiter called to tell me I was to meet with Dave that day.

“I thought it was the next day. Five minutes later, I get a call and it’s Dave. He says ‘What’s the problem?’ I asked what he meant. He asked me why I couldn’t meet with him. I told him I was getting ready to walk into the gym in sweats. I didn’t have a suit. He told me he didn’t care. A half hour later, I showed up in gym clothes and a hat on backwards. He hired me and we’ve been best friends ever since. In March 2014, we spoke and he told me about this great idea he was working on.”

A month later, Marver called Osborn back and they agreed to move forward with the project. Originally, Osborn worked as an adviser with VICIS, and now he’s taken on the role of vice-president of business development, resigning after 15 years from Medtronic in early May 2015. One of Marver and Osborn’s goals is to make VICIS bicoastal, working in Seattle and possibly branching out to create a business home in South Jersey.

“It makes perfect sense geographically,” Osborn said. “When we build, we’ll probably look hard at the Philadelphia and South Jersey areas. You have the NFL based in New York, plus you have six NFL teams (the Redskins, Ravens, Eagles, Jets and Giants, and Patriots) all in that Washington-Boston corridor. We’ve made some early contacts. In addition to the Eagles, we’ve spoken to several NFL and NCAA teams to see what they think of the helmet and get their input. When the NFL Head Health Challenge came out, that opened the door for anyone to apply for their grants. When we were selected, I would say that legitimized us. But we’re taking gradual steps.”

The NFL doesn’t just throw money at projects. VICIS was vetted thoroughly by the league and its Head Health Challenge partners. VICIS received the first $500,000 in grant money in November 2014, and is eligible for the second part of that grant, another $1 million, in September.

“Through our collaboration with GE known as the Head Health Initiative, we are looking to accelerate concussion research, diagnosis and treatment,” said Jeff Miller, NFL senior vice president of health and safety policy. “We admire the work the University of Washington and VICIS have done to develop a helmet that may better protect against concussion. The work that University of Washington and VICIS are doing, as well as that of the other participants in this program, will improve the safety of athletes at all levels of sports, members of the military and society overall.”

According to Marver, VICIS has raised $3.5 million towards this venture with another $1.5M in private capital coming in July.

“Today I think people are accepting that football is a contact sport and that nothing can be done to change the number of concussions in the game,” said Marver, who has a history of success as a CEO in a number of medical endeavors, graduated from Duke University, and has a master’s degree in business from UCLA. “Our new helmet is likely to make a significant difference. An improved helmet is part of a multi-faceted solution that will make the game safer at every level, especially for kids. We’re not just focusing on football. The plan is to bring this technology into other sports, but football right now is the priority.

“Americans love football, especially here in Philly. But sports-related concussions are a widespread and increasing concern at all levels of the game. Current football helmets do a wonderful job protecting against skull fracture, but they are not designed to reduce concussion risk. We’ve completely reimagined the football helmet, leveraging contributions from the best and brightest thinkers in mechanical engineering and neurological surgery. The result is a product that is performing exceptionally well in impact testing vs. current market-leading helmets. We’ve also put great focus on design and have produced a helmet that is visually stunning.

“This will be a helmet players love to wear. The football helmet industry has been slow to innovate. That needs to change. We are driven to make a profound difference by making the game safer for athletes of all ages.”

At this stage, neither Osborn nor Marver could be too specific as to what is going into the helmet. But the timetable is for the helmet to be released in 2016, possibly in time for the NFL season. With success at the NFL level, the helmet would then trickle down to the college and youth levels. This August, VICIS will be making a major announcement about displaying the helmet to the public.

“We are advancing research and technology development that will make the game safer, but the benefits are bigger than the NFL—our work will benefit other athletes, the military and society at large said Alan Gilbert, Director, Global Government and NGO Strategy, healthymagination at GE. “Winners like VICIS are changing the way we think about monitoring impact force, distributing the force of impact, and elevating athlete performance. These are pioneering efforts and we're excited to be able to support all the winners and the exciting developments they are working on.”

Said Marver, “I see this is an important public health issue, I really do. It’s a problem that demands a bolder solution and it’s something that we’re excited to be a part of and solve. Today’s helmets, in my opinion, resemble those that were worn in the 1970s. Football helmet innovation is long overdue. We intend to fill that void.”

For Osborn, the leap is more personal. Like Marver, he changed his life to make the move to VICIS, and he has two young sons, 9 and 12, who play football. What swayed Osborn, aside from Marver’s involvement, was the vision of seeing the helmet on his sons one day.

“It’s why this new helmet means so much more to me,” Osborn said. “I have two boys who play football and as a father and someone who played and loves the game, I want them to enjoy football and be protected playing the game. I coach all of my son’s teams. I’ve had four or five concussions playing, two that required me to stay overnight in the hospital. One came playing for Wildwood High against Oakcrest. I’ll never forget it, because Bruce Arians (then Temple’s head coach) was there scouting me my senior year. I got one of those concussions that when you get hit it keeps building, and building, and building.

“By the second quarter, I was a quarterback and free safety calling offensive plays in the defensive huddle, and defensive plays in the offensive huddle. They finally took me out. My mom was there and I didn’t know who she was. It was extremely scary. Knowing what concussions can be, as the father of two little boys, I don’t want them to go through that. This technology is needed to change the game.”