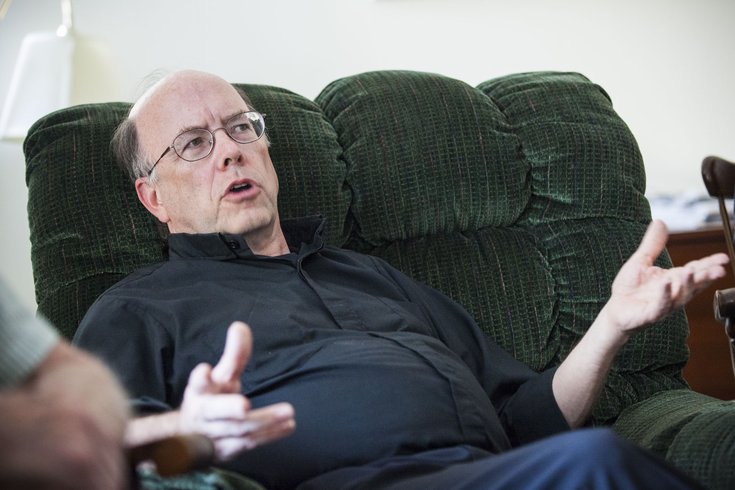 The Rev. Richard McCouch says Jesuits' willingness to voice opinions -- and sometimes contradictory opinions -- is a characteristic of members of the Society of Jesus.

Asked about families having more children than they can afford to raise the Pope responded: "Some people think that - excuse my expression here - that in order to be good Catholics we have to be like rabbits. No. Parenthood is about being responsible. This is clear."

"Women in the church are more important than bishops and priests."

At least not like the 265 popes who’ve come before him as the leader of the Roman Catholic Church.

When Francis pontificates, he does not sound like a conventional pope.

It’s just that we’re not used to hearing from a Jesuit pope, say local members of the nearly 500-year-old Society of Jesus - the Jesuits’ formal name.

Francis is a first in many ways: 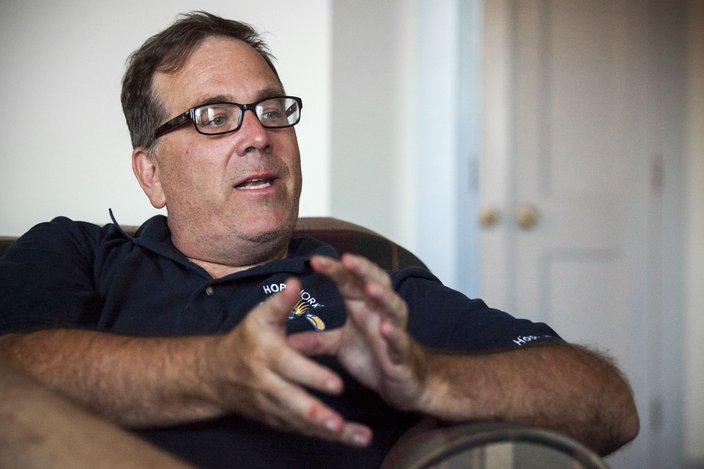 But maybe most significantly, Francis is the first Jesuit ever elected pope.

“There are not supposed to be Jesuit popes,” says the Rev. Daniel Joyce, executive director of mission programs at St. Joseph’s University, and himself a Jesuit.

That's because Jesuits avoid accepting stepping-stone positions in the church’s upper hierarchy, explains Joyce, and even within their own ranks a Jesuit leader – a provincial – remains in charge for just six years to keep from focusing on accumulating power.

“There was only one person in the room who was a Jesuit when the College of Cardinals voted,” to make Cardinal Jorge Mario Bergoglio of Argentina the first Jesuit pope, adds Joyce.

“I think it will be another 500 years before we see another Jesuit pope, but he is very much a Jesuit. He’s leaving a Jesuit mark through his spirituality, his priorities and his style,” Joyce says.

Even the non-Catholic world has noticed a change in rhetoric and tone when Francis pontificates.

A popular pope, whose messages emphasize mercy over dogma, Francis is often dubbed a “rock star” in news accounts.

He’s a people’s pope who knows how to strike a common chord. 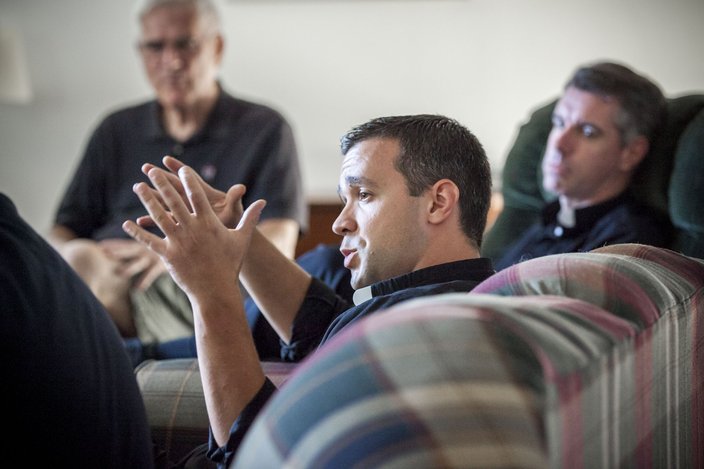 Adam Rosinski, who is becoming a priest, is hosting more than 400 students from Jesuit high schools from Canada, Puerto Rico and the states during the pope's visit to Philadelphia. (Thom Carroll / PhillyVoice)

Francis makes news when he talks, even though he has not substantially altered church doctrine.

That’s most memorably illustrated by his recent commentary on gay Catholics.

In July, Francis said: "If a person is gay and seeks God and has good will, who am I to judge him?"

But the pope went on in his very next sentence to say the church’s long-held teaching that homosexuality is a sin remains unchanged. What’s recalled, though, is Francis’ conciliatory language, not the complete message.

“This pope is for all intents and purposes a rock star, to have the sort of connection he has with people.” – Rev. Steve Surovick, chaplain, St. Joseph's Prep

And Putthoff says that’s because, “He sounds like a fellow Jesuit.”

Putthoff’s fellow Jesuits at the Arrupe Community – row homes across the street from St. Joseph’s Preparatory School on Girard Avenue – nod in agreement. The community recently invited PhillyVoice to talk with them about what makes a Jesuit a Jesuit.

The community's leader, the Rev. Rich McCouch, 58, explains the kinship they feel when Francis speaks.

“Anyone from another Jesuit community would see him (Francis) as a brother,” he said.

Asked to explain what distinguishes a Jesuit from other Catholic religious orders, McCouch responds by telling a Jesuit joke:

“If you ask two Jesuits for their opinions on something, you’ll get four answers.”

The five other Jesuits in the room smile knowingly.

So here’s a quick primer on Jesuits, who are known for a number of characteristics, such as:

• Saying what’s on their mind, often saying it repeatedly.

• Involvement in education - St. Joseph’s, Fordham and Georgetown universities are just three of the 28 Jesuit colleges in America.

• A missionary outreach that has sent “God’s Marines” to 112 countries.

• Not having an official dress code: Puthoff, for instance, favors sweatshirts and sandals unless he's at a formal function.

• They also have a reflexive willingness to question – though abide by – official church directives.

And unlike some orders where every member is involved in the same activity, Jesuits’ individual missions are determined through each man’s skills and the needs of the community where they serve

That matching is done in consultation with a regional leader known as a provincial, says McCouch, who is his community’s superior and an assistant to the Baltimore-based provincial who oversees the region that includes Philadelphia.

It’s useful to know that Francis is not just a Jesuit, but that he also served as a provincial in Argentina, meaning he had to hone a skill for listening and responding to the Jesuits he led and fitting their skills into assignments.

That skill of listening, then responding simply and directly, is part of what sets him apart from other popes, even though he hews to Catholic dogma. 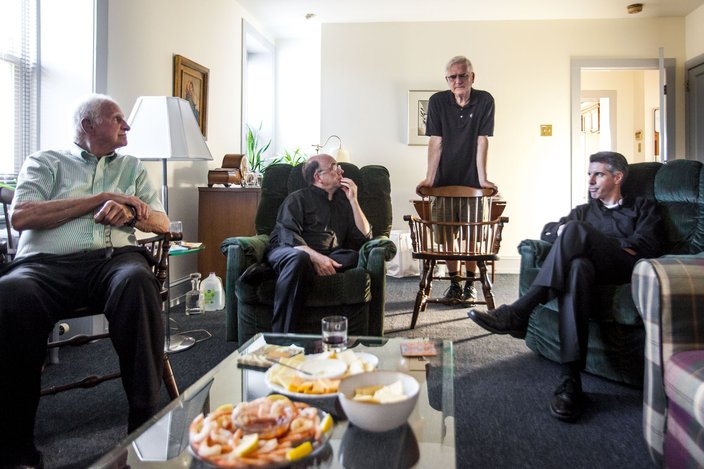 Philadelphia Jesuits say Pope Francis' background as a member of their religious order is a clear part of how he communicates. From left to right, the Rev. Neil Ver'Schneider, the Rev. Richard McCouch, the Rev. George Bur and the Rev. Steve Surovick. (Thom Carroll / PhillyVoice)

“He’s constantly quoting his predecessors, but he manages to say it in a different way,” that somehow seems bold and new, says the Rev. Neil Ver’Schneider, 84, the vice principal of the elementary school at St. Joe's, Gesu.

“This pope is for all intents and purposes a rock star, to have the sort of connection he has with people,” says the Rev. Steve Surovick, 41, a chaplain at the school.

Enough of a rock star that Adam Rosinski, 30, a campus minister, has 420 students from Jesuit schools in Canada, Puerto Rico and across the states coming to Philadelphia to explore “the joy and mercy” that are at the core of Jesuit beliefs – and the pope’s ministry.

“To do this now with this pope is humbling,” Surovick says.

Puthoff says this pope’s “vigor” speaks to a younger generation.

“I think there is a thirst to meet God, and he radiates that. His talk so far has really energized people with a conversion of the heart,” says Putthoff, who has recently returned to graduate school for his fourth master’s degree.

Ver’Schneider laughs quietly, summing up the “Francis Effect,” which is rooted in the pope's Jesuit training and beliefs.

“The heart moves feet,” he says, his eyes glistening.