Who will sit on the Iron Throne? The best reactions to our 'Game of Thrones' Fantasy Draft

By Matt Mullin
PhillyVoice Staff
Television Game Of Thrones
from 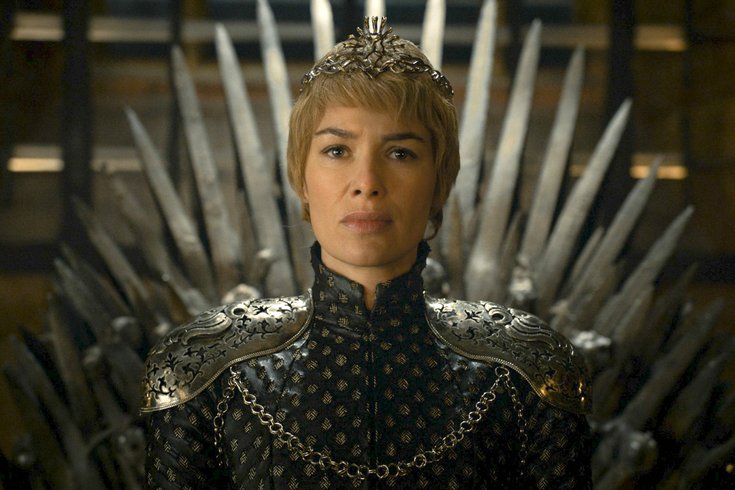 Cersei Lannister (Lena Headey) currently sits on the Iron Throne. But for how long?

On Thursday, we unveiled the results of our first-ever "Game of Thrones" Fantasy Drat, offering up pick-by-pick analysis and asking you, the readers, to tell us who you thought built the best team to conquer Westeros.

To say we're a little excited for Sunday night's premiere of the wildly popular HBO show would be quite the understatement.

If you have no idea what I'm talking about – or if you missed the original draft post – you should click on over to check it out. If nothing else, take a look at the rules as they should help explain a few things about how these teams would work together despite containing characters who would likely kill each other the first chance they got.

And, as a reminder, here's a look at how the picks played out: 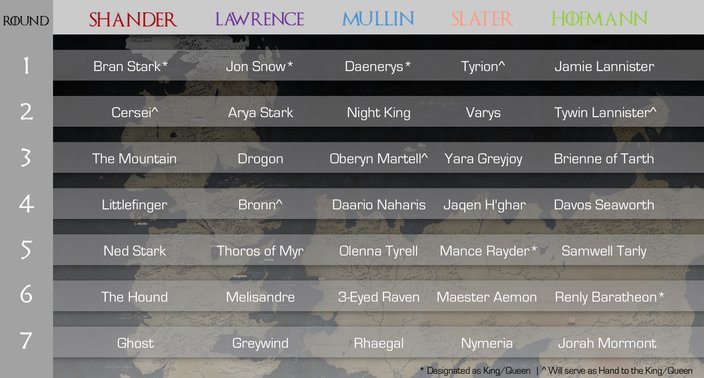 There was plenty of controversy over which team would win, and some of us spent hours on Twitter defending our picks to the masses. But the masses have spoken and decided a winner (although I'll leave the poll open a little longer in case you're just catching up and haven't had a chance to vote yet).

Of course, if we've learned anything watching the first six seasons of "Thrones," it that's terrible things can happen to anyone – and quite often they happen to the people you least expect, or the ones you believe deserve it the least. Basically, my 42 percent is like Littlefinger's word – it means a whole lot of nothing.

And based on the feedback we got on Twitter and in the comments, there's no consensus on which one of us would theoretically claim the Iron Throne.

[SPOILER WARNING: If you aren't up to date on the show – through six seasons – this post may contain spoilers.]

THE THING ABOUT BRAN...

We'll get to the general feed back in a minute. First, we have to go over what proved to be a controversial first-overall pick, one that I thought was pretty much a no-brainer. House Shander drafted Bran Stark with the No. 1 pick, and people thought one of two things: either it was a genius move; or Eytan passed on Bob McAdoo and Dr. J (in this case Jon Snow and Dany) to draft the LaRue Martin of Westeros.

Shander, you took the worst character in the show #1?! Dude seriously?! pic.twitter.com/euXAaENEq5

This is a show where women give birth to smoke monsters. Dragons come alive. This kid falls 12 feet & still can't walk. I can't stand Bran

And this was just the beginning. As a reminder, here's the reason Eytan gave for drafting the young Stark with the top pick:

The kid sees all. The No. 1 overall pick is one of few people in the show who possess truly powerful magical abilities. Think of the possibilities with the King being a Warg. He can enter the mind of Dany's Dragons or any other animal used against him. He's even managed to enter the minds of humans. Plus, with the power to see into the future, he'll see any attack on him coming. A little young still, but enter the Hand.

This is a bade take, Egan. Bran is one of the most important characters on this show, up there with Dany and Jon Snow.

@ShanderShow has the strongest team IMHO Bran basically is the Trump card to all. Clegane bros is 💪💪💪

Whoever has Bran wins.

Lol Bran potentially the key to beating the greatest threat/villain in the show and it's the worst pick in any draft ever? Tebow tho?

But whoever has Bran is a loser. The character sucks.

Drafting Bran first overall is the worst pick in the history of any draft. Ever. That's embarrassing. https://t.co/9jE4T4M8MH

@ShanderShow with a TERRIBLE draft. The hound is a steal in round 6 tho. You can't take Bran Stark #1!

Then came the gauntlet...

Do something Bran can't... walk away from this argument...

Safe to say the world is still torn on Bran, although I think it's fairly obvious how important he is to the show. Sure, he's not actively making a run at the Iron Throne, but he possesses certain talents that no one else in this entire world can match.

And if he can actually see the future or influence future events by traveling into the past – think "Hold the Door" (RIP) or Ned outside the Tower of Joy – then he may already know how this whole story ends. Wouldn't you want that on your team? I know I would...

Here's a look at some of the picks that got the most praise.

Got to go with John Snow, the man can't die

Bron was a legit steal, had him going in the third round really.

Arya Stark is the Kershaw of this entire group. You can see the greatness. And there's so many years ahead of amazing killing

Thought @matt_mullin had the best draft, but taking Greywind late....that's like taking Bo Jackson in round 7. Bold move

WHERE WE WENT WRONG

I get it. Tormund going undrafted is criminal. As is the fact that there's a dragon out there that didn't even get a tryout invite....

Sorry Hoffman, but Sam Tarly is the Danny Watkins of this draft 🔥🚒

Khal Drogo undrafted? That's like leaving Aaron Judge on the board.

You all lose for not drafting Tormund

also, no one grabbed Wun-Wun the giant even as an undrafted free agent??? come on

Did House doctors not like Drogon's physical? How does he last to the third round? Rumors are out about degenerative wings

Sorry, Tormund was a UFA. Even worse.

also @ryanlawrence21 is crazy. Taking two priests for the Lord of Light when he shoulda took Beric Dondarrion over Thoros of Myr smdh.

And now a look at some more general thoughts.

Mullin is the favorite coming out of this draft but I thought Lawrence was a clear 2nd. stealing Drogon and cornering market on revivers key

Night king and a dragon. I think you'd win

Matt you crushed it. Although the 3-ER and Night King are sorta complete oppos, Having NK and Dany is huge.

might give edge to @matt_mullin w/ his drafting of Night King. Were deities eligible to draft? Like the Lord of Light or the Great Stallion

I just remembered something about the Night King. He can't travel south of the wall. Might have to tilt advantage back to Ryan

OK. Time to go finish some actual work before the premiere...