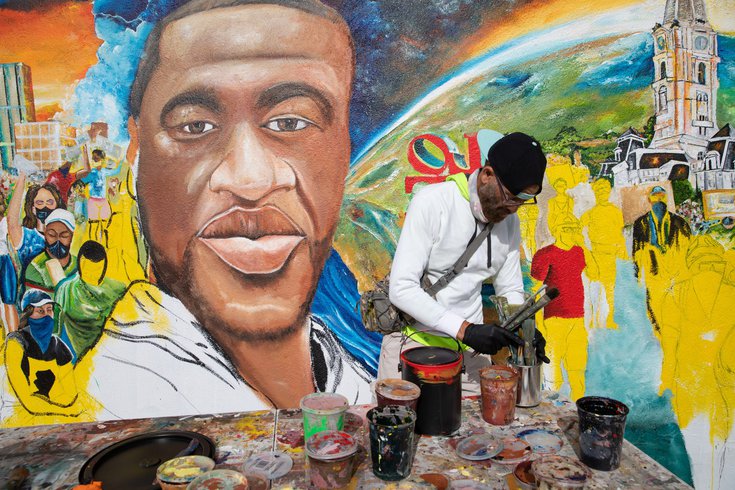 Philadelphia's new George Floyd mural was designed by artist Randall Whitfield, above, with assistance from Briana Dawkins. The mural was dedicated at Tang Pharmacy in Olney on Tuesday afternoon.

When George Floyd was killed by Minneapolis police in May 2020, communities across the globe marched in the streets for weeks in protest of police brutality and racial injustice.

In Philadelphia, the response included the North 5th Street Revitalization Project commissioning a mural that was painted on an abandoned newsstand to pay tribute to Floyd.

That mural was defaced and vandalized with white nationalist graffiti in June. On Tuesday, Mural Arts and the North 5th Street Revitalization Project dedicated a recreation of the original mural on the exterior sidewall of Tang Pharmacy at 5600 N. Fifth St. in North Philly.

The mural, designed by artist Randall Whitfield with assistance from Briana Dawkins, is entitled "George Floyd (Never Forgotten)." It features an image of Floyd surrounded by the Philadelphia skyline and dozens of masked protestors, a callback to the weeks-long demonstrations in support of Black Lives Matter that occurred throughout the summer of 2020.

"Me and my boss just looked yesterday at two children who came up here and stood there for a while and had to just touch the mural. I know that the most high has used me to be able to do these things," Whitfield told 6ABC. The mural, which is 110 feet tall and 10 feet wide, is meant to inspire "meaningful conversations and actions," he added.

The mural was vandalized with the logo of the white nationalist group Patriot Front, which the Southern Poverty Law Center lists as a white supremacist organization established in the aftermath of the 2017 "Unite the Right" rally held in Charlottesville, Virginia. The new mural stands only several feet away from the newsstand.

Derek Chauvin, the former Minneapolis police officer convicted of murdering Floyd, was sentenced to 22.5 years in prison in April. The other three former officers charged in connection to Floyd's death will stand trial in March.