Ayoub Tabri, 25, was sentenced to 364 days, allowing him to avoid being deported to Morocco 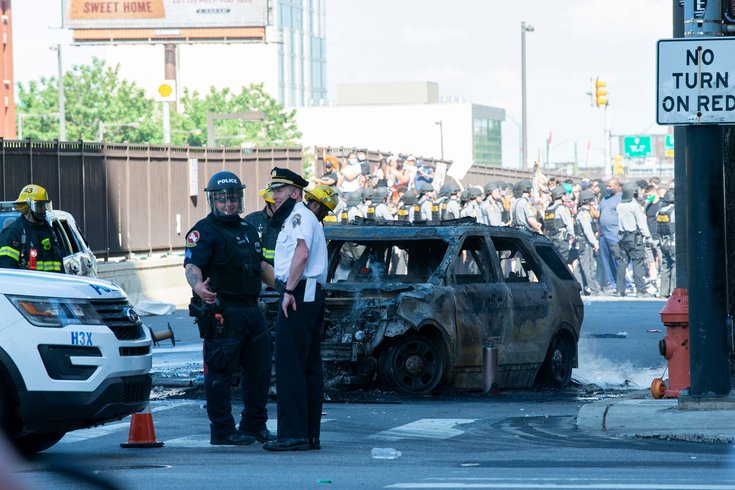 Ayoub Tabri, 25, was sentenced 364 days in prison Monday for throwing a lit road flare into a Pennsylvania State Police vehicle parked near an I-676 exit ramp in Philadelphia on May 30, 2020.

A Moroccan immigrant who set fire to a police vehicle during the Philadelphia protests that followed the police killing of George Floyd in Minneapolis has been sentenced to 364 days in federal prison.

Ayoub Tabri, 25, of Arlington, Virginia, threw a lit road flare in to a Pennsylvania State Police SUV parked on near an I-676 exit ramp at Broad and Vine streets on May 30, 2020, prosecutors said. The flare ignited a fire that engulfed the vehicle.

Tabri was one of six people charged with setting fire to police vehicles during the protests in Philly.

His sentence accounts for less time than he's already served, the Associated Press reported. It's also short enough to keep him from being deported.

A sentence longer than one year would mean Tabri's crime would be considered an aggravated felony, the Inquirer reported. If this were the case, he could be deported.

Tabri's attorneys say he's lived in the U.S. on a green card since he was 6 years old and that he doesn't know anyone in Morocco or speak the country's languages. U.S. District Judge Joel M. Slomsky said this situation was a factor in Tabri's sentencing, but it's not yet clear if the other five people charged will receive the same leniency.

Initially, former U.S. Attorney Bill McSwain had pledged to pursue harsher arson charges against the six people arrested, but several of them arranged plea deals once he left office.

Tabri was one of the first to do so. In March, he pleaded guilty to one count of obstructing law enforcement during civil disorder. That lesser charge carries a maximum sentence of five years instead of seven.

Once he's released, Tabri must serve three years of probation and pay $87,000 in restitution.

Lester Fulton Smith, 26, of Philadelphia – who allegedly threw road flares at the vehicle alongside Tabri – is expected to plead guilty Monday, according to the Inquirer.

Lore-Elizabeth Blumenthal, 35, of Jenkintown, Montgomery County, pleaded guilty to two counts of obstructing law enforcement during civil disorder for throwing a burning piece of police barrier at a law enforcement vehicle in front of City Hall. She will be sentenced later this month.

The other three defendants involved with the City Hall incident — Anthony “Ant” Smith, 31, of Philadelphia; Khalif Miller, 26, of Philadelphia; and Carlos Matchett, 32, of Atlantic City, New Jersey — are scheduled for trial later this year.