Is cooking with ghee any better or 'healthier' than butter?

The scoop on butter's slightly exotic and trending cousin 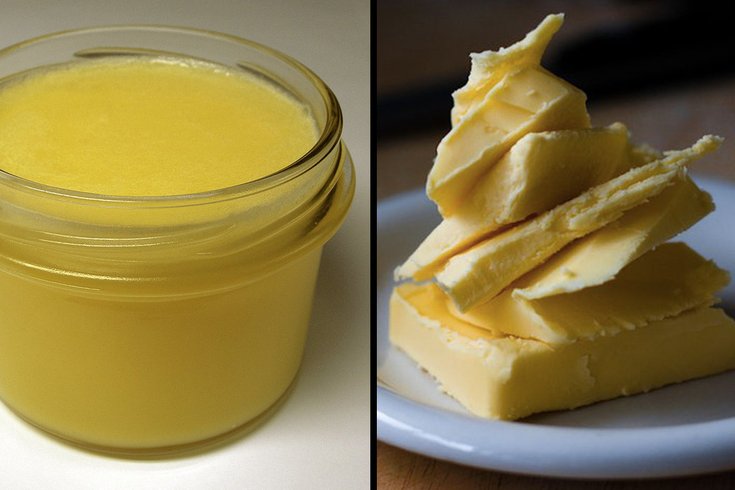 In a world filled with alternatives for nearly every product — some more healthy, some less — the myriad of options can be downright confusing, if not overwhelming.

Back in the '80s when fat was avoided like the plague, butter was considered an unhealthy food best avoided in favor of “lighter options” like olive oil or coconut oil. In fact, it's a great source of fat, helps keeps you full, contains vitamins and makes foods way tastier. All of this is backed by a Harvard report that butter is, indeed, back because researchers have found that “eating less saturated fat, the dietary demon that makes buttery croissants so irresistible, doesn’t actually lower a person’s risk for heart disease.”

Meanwhile, butter’s exotic cousin – clarified butter, or ghee — hit the mainstream as a traditional staple in Indian and Asian cuisines. When butter is melted down, the milk solids separate out, and turn brown as they simmer, Taylor Wolfram, a registered dietitian, tells Refinery29. This leftover buttery oil is called "ghee."

RELATED READ: Here's what you should know about drinking celery juice

Most people who use ghee prefer its smokey, butterscotch-like, flavor, Wolfram says. People on the Whole30 or paleo diets, which prohibit dairy products, also are turning to ghee. After cooking out the milk fat and the lactose and casein inside of butter, glee can be a substitute for anyone who has a dairy allergy, Refinery29 reports.

Ghee is high in omega-3s and butyric acid, a short-chain fatty acid believed to be good for the gastrointestinal tract and digestion, Bon Appetit notes. But it’s worth noting that, because ghee and butter both come from cow's milk, they share similiar nutritional profiles and fat content , Medical News Today notes.

One additional perk of ghee over butter: stability on the shelf. The absence of water means it can be stored without any refrigeration. You do have to keep the jar away from steaming stoves, food and anything else that can introduce bacteria, Bon Appetit warns.

It’s hard to say that ghee is better, or healthier than butter, since their profiles are so similar. Instead, think of ghee as a slightly more flavorful alternative to butter and a good option, because of its high fat content, for those following the keto diet.