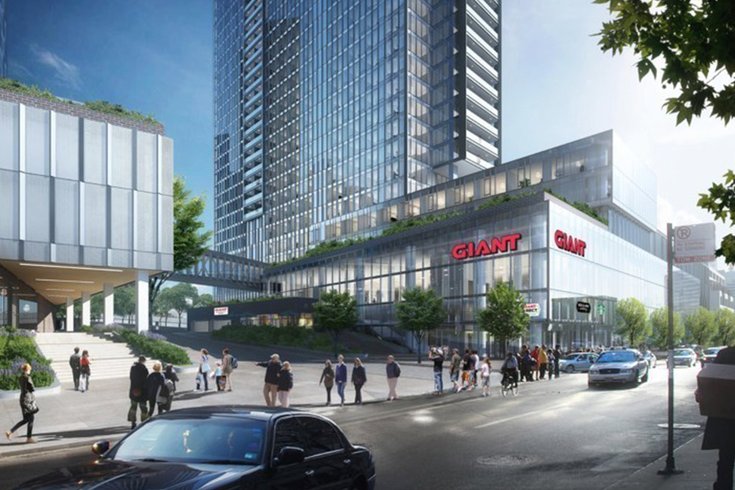 A two-level, 65,000-square-foot Giant supermarket will be built as part of the new Riverwalk mixed-use development project along the Schuylkill River in Philadelphia's Logan Square neighborhood.

Giant has plans to open its first full-size, two-level, flagship supermarket in Center City, and this new store will feature the largest produce section of any of its stores.

The 65,000 square-foot store is expected to open in Logan Square in the fall of 2020, the Carlisle, Pennsylvania-based grocery chain announced Wednesday. The new Giant store will be located in the first two towers being build as part of the Riverwalk Development Project — a mixed use development on the Schuylkill River. The project is expected to bring over 200 jobs to the city.

The supermarket will feature dramatic, high and open ceilings with a first floor glass lobby, and there will be natural light and city views throughout the store. It will have an outdoor terrace and dedicated onsite parking garage that is only available to Giant customers.

The produce section is expected to stock 600 varieties of fresh produce, and local products will be highlighted, Giant officials said in a press release. The new Logan Square store also will have the largest plant-based department among the company stores.

This announcement comes as part of Giant's $70 million investment in the city that includes opening six new stores – the Riverwalk location among them – remodeling two locations and opening four new fuel stations by the end of this year.

In January, Giant opened its first-ever Heirloom Market in Graduate Hospital. The "urban-format concept" store is a fraction the size of a full supermarket and stocks a more curated selection of groceries. The grocer opened another Heirloom Market in University City earlier this month, and two more similar stores are planned to open by the end of the year in Northern Liberties and Queen Village.