Investigation: Can you bring a stuffed giraffe on public transit? 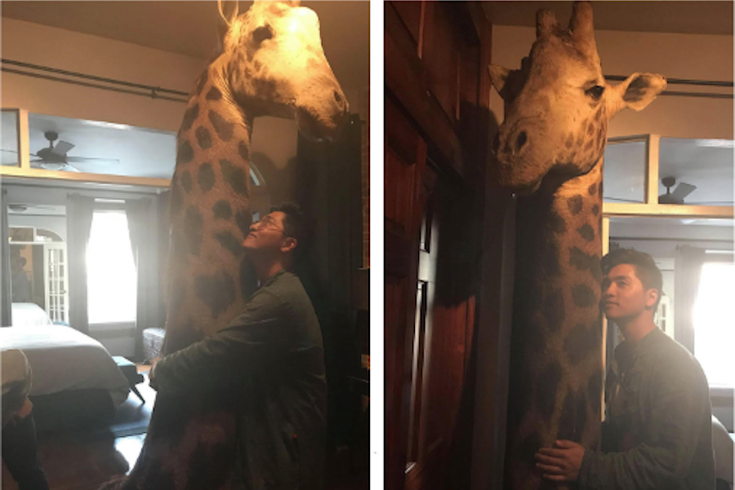 After winning an eBay auction, Jason Tang found himself faced with a peculiar question: could he get the 9-foot taxidermy giraffe from New York City to Philadelphia via public transit?

Say you’re into taxidermy and fate would write a script in which you won an eBay auction for a 9-foot by 2-foot stuffed animal.

Imagine then that your transportation choice from New York City to Philadelphia is public transit – specifically the railways operated by New Jersey Transit and SEPTA.

This is a peculiar predicament, and one for which there really isn’t a handbook to consult.

That’s what Tang did late last month, posting on Facebook groups like "Old Suburban Boners for Car-Owning NIMBY Homeowners" about his situation.

“Excuse me if this is the wrong place to post but I am at a real loss of other places to post,” wrote Tang, a Cambridge, Massachusetts native and master's student in computer science at the University of Pennsylvania. “I’ve transported chairs on NJ Transit to SEPTA before, but obviously never a giraffe head.”

Few of us have, to the point that the post drew quite a bit of attention including mine, thus prompting me to reach out to Tang and various regional transit agencies to better understand the rules governing such an odd request.

“A SEPTA rep online just informed me that they won’t allow it. However, I did call and they said it’s at the discretion of the conductor,” the 20-something shared last week. “I haven’t transported it yet, and I’m not sure I’ll be able to, given that SEPTA has just informed me that it’s too big, too.”

I suppose this is understandable. In a world rebelling against manspreading and leaving one's bags on empty chairs on public transportation, a huge stuffed giraffe head might be seen as intrusive.

“Unfortunately, an item of that size would be too large to transport on NJ Transit." – Kate Thompson

We, too, consulted NJ Transit and SEPTA for edification. (PATCO never responded to requests for comment on their taxidermy transportation rules, for what it’s worth.)

“Unfortunately, an item of that size would be too large to transport on NJ Transit,” said Kate Thompson, senior public information officer for the agency.

Andrew Busch, SEPTA’s chief press officer, had “heard some chatter about this” situation, as well.

“It definitely would be too big to bring on SEPTA,” he said. “The general policy for transporting items on SEPTA is that the item needs to fit on your lap or within your seating/standing area. It also cannot interfere with the movement of passengers or the operating mechanisms of the vehicle, or otherwise interfere with safe operations.”

What a shame for Tang, who is still working on a plan to get his giraffe head home to Philly.

“I didn’t end up transporting it yet because it was flaking,” he shared of his fear of trying his luck without getting formal clearance. “So, I think I need to get a car."

Now, you're probably thinking what we were thinking when we first saw this: what the heck does Tang need with a giraffe's head?

"I just think it's a great statement piece that doesn't take up too much space," said Tang, who didn't want to share his winning bid. "I got to just wait for a ride, I guess.”

Good luck with that, Jason!