Two museum displays were painstakingly cleaned, updated, and restored over the course of months — and here's how it was done 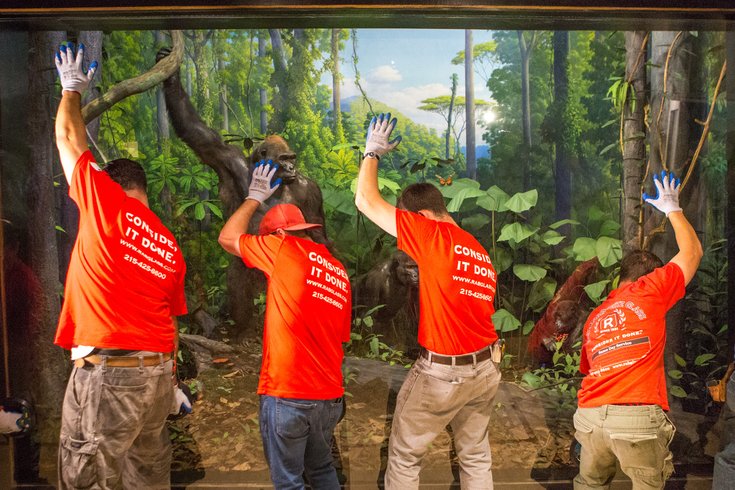 Glaziers from Paul Robinowitz Glass install a panel of glass, sealing in the newly-cleaned and repaired gorilla diorama at the Academy of Natural Sciences, Thursday, Sept. 20, 2018.

For the past seven months on the Benjamin Franklin Parkway, inside a building that was once heated by coal, teams of conservation scientists and museum designers in hazmat suits have scrubbed wax-pressed leaves with acetone, airbrushed animal fur, and re-staged lighting in two large dioramas.

They're working on two scenes of the natural world first built in the Academy of Natural Sciences of Drexel University back in 1933 to show visitors far-away places they would never get to see in their lifetimes.

So for 80 years behind glass, three taxidermic gorillas in the African jungle and a small group of stuffed elegant Chinese takin sat and watched history go by.

After teams of historians, scientists, taxidermists, designers and artists completed the comprehensive restoration, the glass fronts on the two dioramas were re-sealed on Thursday and the scenes were permanently put on pause for the museum's visitors to see yet again.

Jennifer Sontchi, the academy's senior director of exhibits and public spaces, recruited expert and longtime taxidermist George Dante — who started his New Jersey-based business called Wildlife Preservation when he was still in high school — for the enormous project.

Because the dioramas hadn’t gotten a deep clean, well, ever.

The canvas-painted backdrops were scrubbed; the taxidermic animals were handed over to Dante; potato-chip thin leaves were gently rubbed with Q-tips to remove old dust and soot created by the building's former coal-fired heating system; and the flora and fauna were scrutinized by conservationists, all in a matter of months.

Cleaning processes needed to be repeated sometimes four, five times — “It would come off black, just black," Sontchi said of the layers of grime that were removed.

The teams ultimately also found errors how the original dioramas were staged, like the wrong kind of leaves were in Africa, misplaced orchids were in Asia, the wrong kind of butterfly lived in the jungle. (If you can spot an error in the dioramas now, Sontchi said, hats off.) 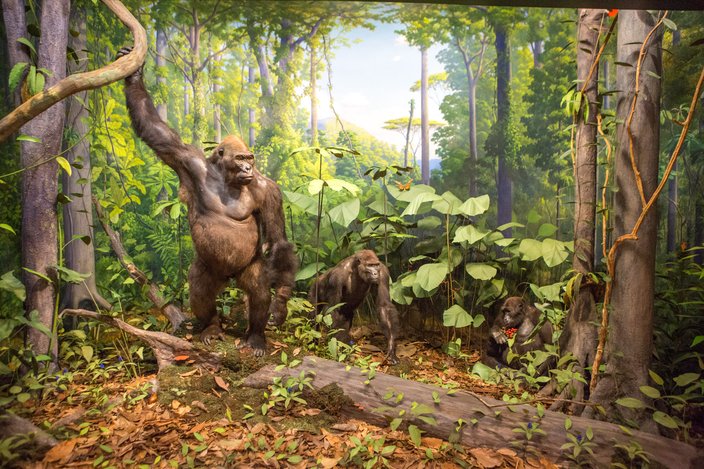 The freshly-cleaned and repaired gorilla diorama at the Academy of Natural Sciences moments before it is sealed for future generations to experience.

Updating the interior and dusting off the props were part of the museum's larger goal to bring them back to life, so to speak. When museums first opened to the public in the 1930s, these dioramas were about conservation, preservation, and to show the public that yes, gorillas actually do exist somewhere in the great wide beyond — even though most people would never get to see one live in its natural habitat.

"At that time, [scientists] didn't think these areas were going to last," Dante said. "They saw the writing on the wall that our natural world was being lost at a rapid rate so they figured these dioramas were the last record of that and to bring awareness to protect the natural wildlife."

"But that story completely changed," Sontchi said. "You can go on YouTube and see a gorilla right now."

Now, museum staff like to think dioramas are pieces of history, paused in time. They capture something distinct that you can't even see in a zoo, or sometimes even in the animals' native habitats today — a species thriving in its intended environment; a codependent, thriving ecosystem. 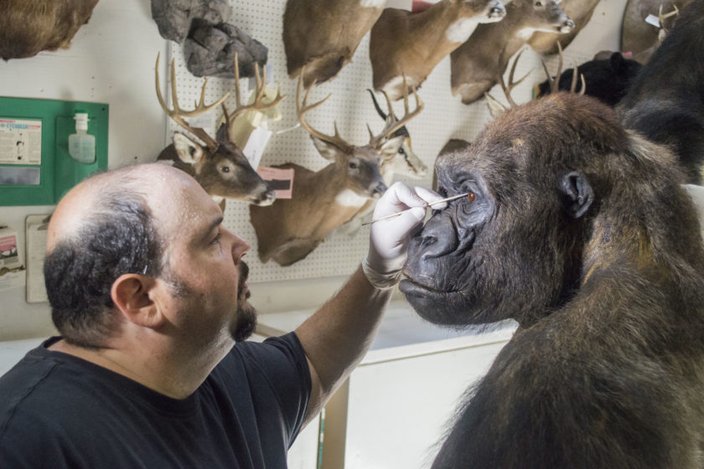 Each adhesive, paint, and dye had to be carefully selected so that years from now not just the skin and fur would keep a pulse, but that the shine on flowers and vibrancy of every butterfly wing would last, too.

“We knew we were making decisions that were bigger than us,” Sontchi said.

"We want to make sure these dioramas will be here for another 100 years, for our grandchildren's grandchildren," Dante added.

Taxidermists first evaluated cracks in the skin, splits, fading, and shrinking on the gorilla and Chinese takin. But they mostly were just dirty, with a few cracks here and there. And the takin especially needed a paint job.

Sontchi said when the antelope-like animals left, they were gray. But Dante and his team hand-mixed and experimented with different fur shades, eventually airbrushing five blended colors onto the furs to restore them to their original buttery gold. 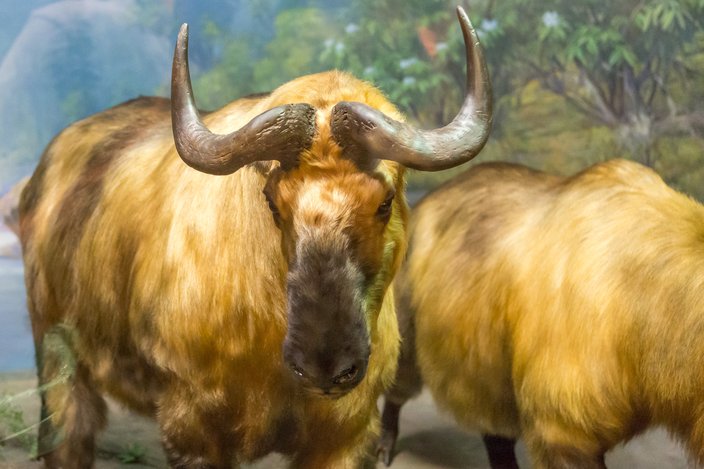 The takin diorama at the Academy of Natural Sciences moments after the glass was installed.

In the taxidermy world, there are some little-known secrets Dante clued me in on. For starters, the reason the gorilla and takin have been so well preserved, after all these years?

That's still the only way taxidermy can be completely preserved from pests, he said, which means the industry has suffered since we've discovered the dangers of arsenic. Cloth moths and beetles are no match for the chemical because it migrates into the animal hair and kills bugs when they try to munch. Today, there's no safe, effective pesticide they can use to keep them out.

Another industry secret? When cleaning some of the plants in each diorama, staff use artificial saliva (yep, they make that) to get soot off the tissue-paper-thin leaves and flowers without stripping away color. 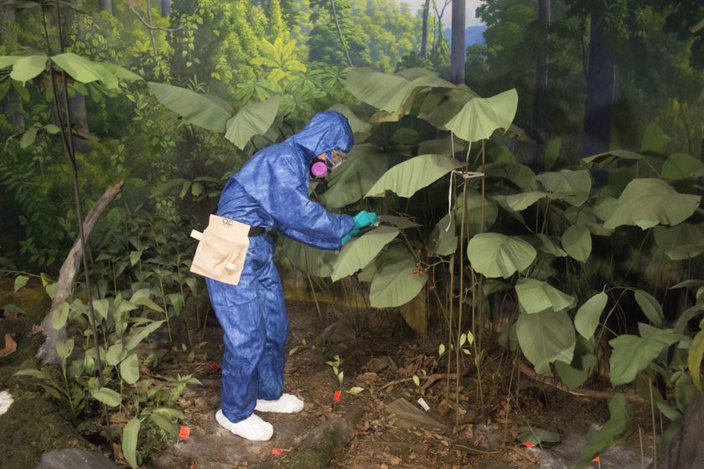 Every leaf in each diorama was cleaned by hand.

"It’s pretty hard to get enough saliva from your co-workers to clean a diorama … but you can buy artificial saliva to take the pressure off,” Sontchi said, laughing.

Leaf litter on the ecosystem floor that were like crushed, mealy, brown leftovers — like the path of leaves in the fall leading up to your front door — was replaced with leaves from local arboretums that fostered African trees.

“Because we don’t want someone saying, ‘What's an oak doing in here?’" Sontchi said.

The museum's exhibition designer, Lauren Duguid, an artist, former body piercer, tattooer, and professor at the University of the Arts in Philly said at the diorama re-sealing on Thursday that these holes in the wall were essentially her home for four months while she dusted, shined, and glued in two layers of gloves, a breathing mask, and a splash suit that kept all of the dust and heavy-metal toxins out, and her body heat in.

Pretty much anything that looks alive is dead in there and needed to be cleaned with a dexterous hand. Most of the wax plants had the sturdiness of "a drip of wax on a candle," Duguid said. And she cleaned them while being double gloved and sweating. 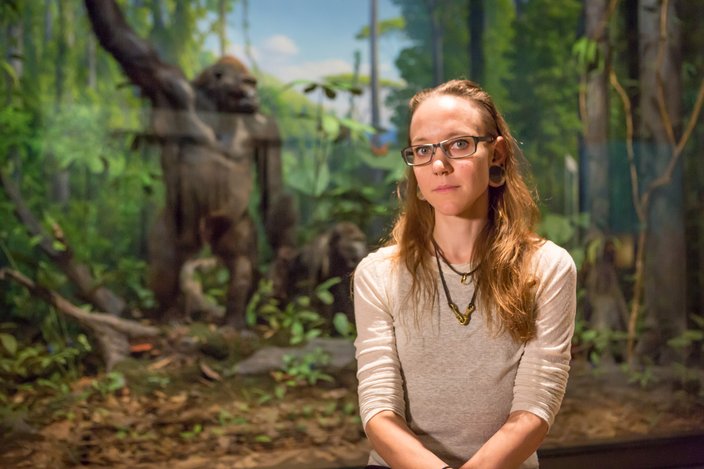 Lauren Duguid, exhibitions designer at the Academy of Natural Sciences.

But she's already got her eye on another project: The giant sable antelope, which features termite mounds, little colorful shrubs, a long-tailed bird and a few rare flowers.

Restoring these two ecosystems was really just phase one. Now, the teams will take on labeling each diorama, but not basic descriptions of the huge animals like there were before. This time, the Academy of Natural Sciences wants to describe each ecosystem and how every snail, piece of grass, and bird is dependent on the other.

And for the first time in the museum's history, there will be some digital components for the viewer experience, like videos and interactive games.

"We’ve decided to broaden the story," Sontchi said. "These dioramas tell very rich, very deep stories but our dioramas don’t carry that. We’re reframing them as ecosystems, instead of just the animals. It’s important for people to take away from the museum that every animal is part of a system.”

The glass, which weighs about 330 pounds, was hoisted back into place on Thursday in front of some of the staff, a boisterous crowd that burst into applause when the gorillas were safely back behind the same glass used to seal them during the Great Depression.

Compared to the gorilla and takin displays, the other dioramas look dull now, as if they're all a bit more dead than they already are. The new ones, though, are eerily real.

But that's the whole point, right? If the fragility of these ecosystems seems real, maybe it will make some sort of impact and leave the museum's visitors with a lasting lesson that's more than just a few facts on a plaque. Or that's their hope.

“Get engaged, get some agency for your own world, your natural world, and jump on in," Sontchi said. "That’s really what we’re hoping we achieve with our artificial saliva."