Meteorologist Glenn 'Hurricane' Schwartz to retire from NBC10 in May

The weatherman, who has spent 27 years tracking storms at the station, plans to turn his focus toward climate change 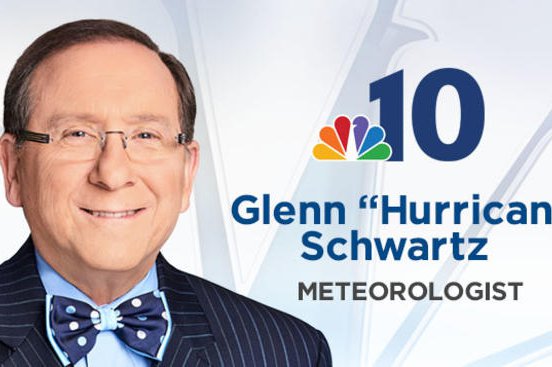 Glenn 'Hurricane' Schwartz's 27-year run at NBC10 in Philadelphia will come to an end in May when the lifelong meteorologist retires.

Meteorologist Glenn "Hurricane" Schwartz will deliver his final weather forecast for NBC10 in May.

The Philadelphia weatherman is retiring from TV after a 42-year career.

"I've decided: If I'm gonna try some new things and pursue other things I've put off, there's no time like the present!" Schwartz wrote in a message posted by NBC10.

However, Schwartz said his days as a meteorologist are not over. He plans to turn his attention to "a lot of things," such as educating the public on the climate emergency.

"Yes, it is an emergency," Schwartz wrote. "Twenty years ago, it was just 'Climate Change,' then 10 years ago became the 'Climate Crisis.' Now we're at DEFCON1.

"As a professional forecaster for 50 years, I've seen changes that weren't expected for decades to come — but now they're here," Schwartz continued. "Records aren't just being broken (that's happened forever); instead, they're now being smashed."

Schwartz was born in Philly and graduated from Central High School. He earned his bachelor's degree in meteorology from Penn State University in 1972.

His meteorology career began at AccuWeather's headquarters in State College before he eventually gained employment at the National Hurricane Center in Miami, Florida.

His television career took Schwartz to local news stations in Atlanta, New York City and Florida. He earned his nickname "Hurricane" during his tenure at WNYW-TV in New York when a colleague saw him blowing around in a storm. Schwartz also was one of the Weather Channel's first "storm chasers."

Schwartz returned to Philly in 1995 and joined NBC10's weather team. Some of the most notable weather events he covered in his 27-year run there included the massive blizzard of 1996, Hurricane Floyd in 1999 and Superstorm Sandy in 2012.

Schwartz became the station's chief meteorologist in 2002 and served in that role until 2017 when he stopped appearing on the network's 11 p.m. newscast. Schwartz has continued to provide weather forecasts on the 11 a.m. newscast and the station's late afternoon and early evening telecasts.

Schwartz took a brief hiatus from the station in 2012 while he recovered from double bypass surgery.

Schwartz's weather forecasts are perhaps best known for his iconic bow-ties, which he says have been part of his contract with the network. He also is an avid Philly sports fan, which was maybe best on display when he famously bagged former Sixer Ben Simmons during a newscast.

🏀 Our own @HurricaneNBC10 doesn't hold back on Ben Simmons. "What is wrong with that guy?" https://t.co/d9J1MR2VNg pic.twitter.com/GkPcYAW3yS

"Working for NBC10 has been the crowning achievement of my professional life, and I'll always be grateful beyond words to my work 'family' with whom I've shared so much," Schwartz wrote. "And to have reached the professional heights I've reached in my own hometown is a blessing most people never get; I know very well how fortunate I've been."

Schwartz was inducted into the Philadelphia Broadcast Pioneers Hall of Fame in 2010. He published his first fiction novel, "The Weathermaker," in 2020 and also co-authored the "Philadelphia Area Weather Book."

Schwartz's upcoming departure from NBC10 is the latest big-name local newscaster to retire this year. Action News anchor Jim Gardner will step aside at the end of 2022 after 45 years with 6ABC.