The Wayward, an American brasserie with French influences, will use the liquor at its bar to make one-of-a-kind cocktails 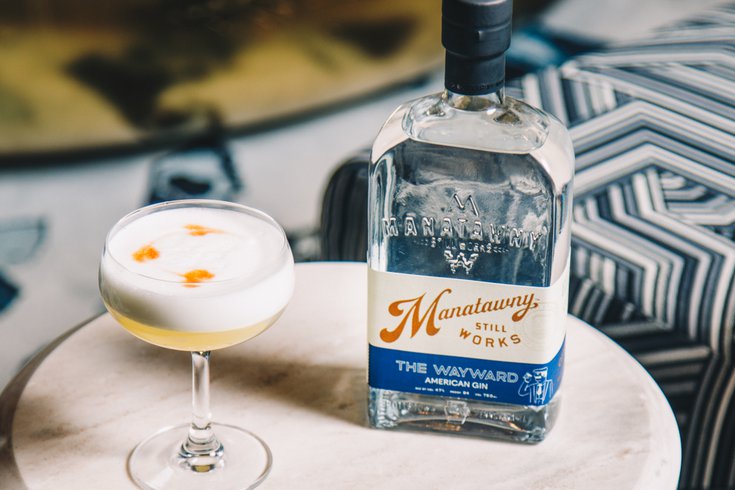 A bottle of the Wayward's new signature limited edition, made through a partnership with Pottstown's Manatawny Still Works, next to a citron presse, one of the restaurant's signature drinks make with the liquor.

A restaurant housed inside the Canopy by Hilton Philadelphia has partnered with a local state-of-the-art distillery to create a batch of limited edition liquor.

The Wayward, an "unconventional" American brasserie influenced by French bistros, is producing 100 bottles of a unique gin with the help of Manatawny Still Works. The collaboration came about due to mutual respect between the restaurant and distillery.

It's not being sold in any stores, so the only places to get a taste are one of Manatawny's two locations in Passyunk and Pottstown or the Wayward, at 1170 Ludlow St.

“This project was born out of our admiration for the gin program at the Wayward," said Fred Worthington, Manatawny's sales and marketing manager. The restaurant's collection is "not only the largest of its kind in Philadelphia, but also a thoughtfully curated one," he added.

The Wayward will be mixing the gin into some of its signature cocktails like the citron presse, which is made with salted honey, lemon, ginger and egg white.

All gins derive their signature taste from juniper berries, but this batch gets its flavor profile from two specific varieties of the fruit. European juniper gives the beverage a "brightness" and Macedonian juniper provides "an earthy, well-rounded mouthfeel," a press release from the Wayward says.

There are many other botanical flavors in the drink including coriander, orris root, Seville orange and peppercorn. While most American gins are centered around citrus flavors, this one takes influence from the french distilling tradition which focuses more on incorporating lavender notes.

This aligns well with the Wayward, whose menu combines American classics like burgers and mac and cheese with French dishes like corn beignets and chicken paillard.

In addition to gin, the restaurant is known for its oysters and other raw bar offerings, like poisson cru and tuna carpaccio.

The Wayward was supposed to open in April 2020, but the debut was pushed back due to the pandemic. The restaurant ended up serving its first diners in August 2020 with only outdoor seating available.

The restaurant and hotel are both inside the Stephen Girard Building, which is named for a French-born sailor who immigrated to Philly and made a name for himself as a banker, real estate investor and philanthropist.

His large estate, worth more than $100 billion by today's standards, was used to found the school that would eventually become Girard College.

Girard bought the entire block the Canopy's building stands on in 1807 and originally planned to build the school there. But he ended up purchasing Girard's current campus, a much bigger piece of land that was then on the edge of the growing city.

It wasn't until 1897 that the current Beaux Arts structure, designed by Girard College alumni James Windrim, opened as an office building.

The building was fully leased before construction was complete and was once home to the offices of Philadelphia City Trusts, the organization that administers Girard's trust and the college named for him.

The block was also home to a Snellenurg's Department Store, another Windrim design, which was built in 1889 but closed in 1962 and eventually razed.

The Girard Building almost met the same fate in 2006, when developers obtained permits to knock the building down. But those plans were scrapped, and in 2018 the Hilton moved into the building following an $80 million renovation.