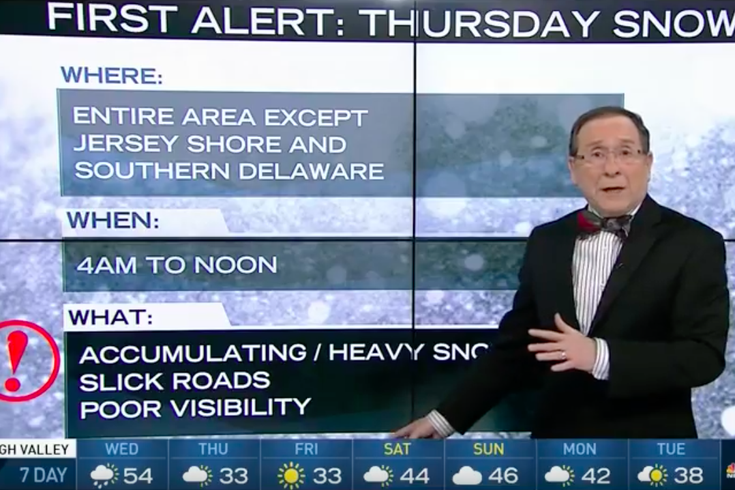 Glenn "Hurricane" Schwartz the "chief" at NBC10? Not any longer.

Schwartz, who is listed now as a "meteorologist" for the station he's been a part of for 21 years, has passed on the title of "chief meteorologist" to newcomer Tammie Souza, Adweek first reported Tuesday. Souza joined NBC10 in March after meteorologist Sheena Parveen departed for Washington, D.C.

A spokesperson for NBC10 said the title was given to Souza because of her role leading the station's 11 p.m. weather forecast. Schwartz, who was born and raised in Philadelphia, leads the 11 a.m., 4 p.m. and 6 p.m. newscasts. Schwartz and Parveen had both been a part of the 11 p.m. lineup in the spring, Philly.com reported.

The change listing Schwartz as an NBC10 meteorologist is reflected in the staff biographies on the station's website, which were updated in June, according to the spokesperson. Though, no formal announcement of the change was made.

"Glenn's not going anywhere," the NBC10 spokesperson said. "It's not a demotion. He's been with us for over 20 years."

Souza, who served as the weekday morning and weekend meteorologist at FOX23 in Chicago before her move to Philly, also leads the 5 p.m. newscast.

Schwartz was named "chief meteorologist" in 2002, according to a 2012 NBC10 website biography saved on an internet archive site. An archived biography from August 2016, also listing him as NBC10's chief meteorologist, had Schwartz leading the weather newscasts at 11 a.m., 4 p.m. and 6 p.m., but not 11 p.m.

Schwartz graduated from Central High School and Penn State University. He took a brief hiatus from the station as he recovered from double bypass surgery in 2012.

“Tammie’s bio was updated to chief meteorologist in late June," the station said in a statement. "The title change coincides with her move to the 11 p.m. newscast. Tammie and Glenn, along with Bill Henley, Krystal Klei and Erika Martin, will continue to provide NBC10 viewers with the most accurate First Alert forecasts for their neighborhoods.”