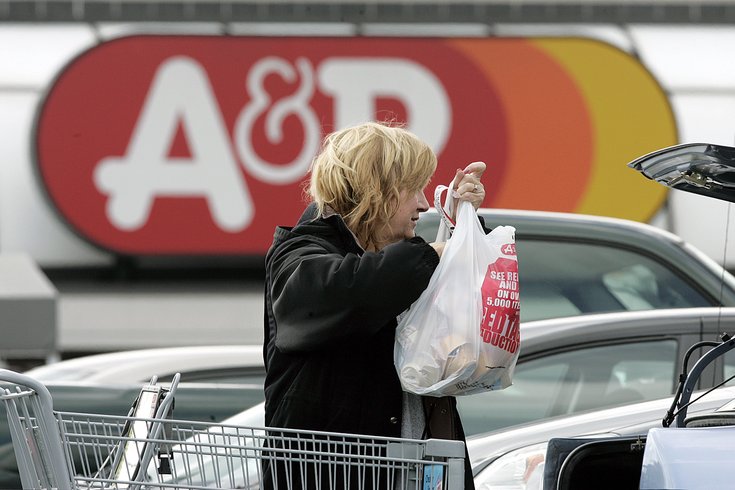 A woman loads groceries into her car outside an A&P store Monday, March 5, 2007, in Wall Township, N.J.

Storied supermarket chain Great Atlantic & Pacific Tea Co Inc, better known as A&P, filed for bankruptcy protection for the second time in five years and said it would sell more than a third of its stores.

The 156-year-old company, which also owns Best Cellars, Pathmark and Superfresh stores, has been squeezed by discounters such as Wal-Mart Stores Inc and up-market grocery chains such as Whole Foods Market Inc.

In its heyday in the early 20th century, A&P operated more than 15,000 stores. It first filed for bankruptcy in 2010, re-emerging two years later as a private company after obtaining financing from investors including Goldman Sachs and an affiliate of billionaire Ron Burkle.

A&P, which now has 296 stores, listed assets and liabilities each of more than $1 billion in its Chapter 11 filing late Sunday. The company was considering a bankruptcy filing among options to cut costs, Bloomberg reported last month.

A&P said in a statement on Monday it was selling about 120 stores for about $600 million. It did not name the buyers. It is also closing 25 stores due to lack of interest and significant operating losses.

In court documents filed late on Sunday, the company said it was in talks with Acme Markets Inc, owner of Safeway and Albertsons grocery stores, Shop & Stop Supermarket Co LLC and Key Food Stores Co-operative Inc to sell its assets.

Double-digit declines in same-store sales over the last two years, debt and a backlog of investment across A&P's operation had made the business untenable, said Neil Saunders, who runs retail research firm Conlumino.

A&P has hired Evercore Partners, an investment bank that specializes in selling assets.

The Montvale, New Jersey-based company employs about 34,000, according to its website.

The company was founded as a mail order business in 1859 by tea and spice merchants George Huntington Hartford and George Gilman. In the same year, it opened its first store-warehouse operation in New York City, according to A&P's website.