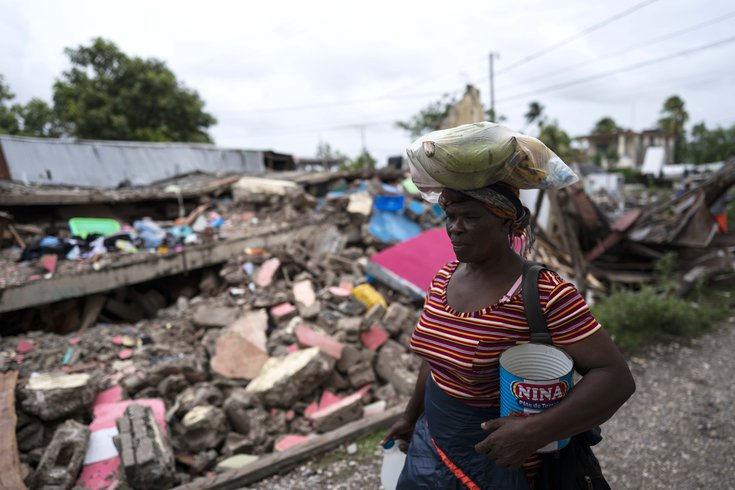 Members of Philadelphia's Haitian community are organizing fundraisers to help the Caribbean country recover from an earthquake that hit Aug. 14, 2021.

Josephys Dafils is more than 1,400 miles from Haiti, wondering when his home country will catch a break.

One week after a magnitude 7.2 earthquake hit the south of Haiti, the nation's Civil Protection Agency on Sunday reported more than 2,200 casualties and 344 people missing, according to the Associated Press. More than 12,200 people were injured, and nearly 53,000 homes were destroyed by the quake.

The natural disaster is the latest blow to the small Caribbean country, which over the past year has weathered the coronavirus pandemic, the assassination of President Jovenel Moïse in July and the violent demonstrations that followed.

"It's exhausting mentally," said Dafils, who moved to the United States from Haiti in 1995 and arrived in Philadelphia from New York City in 2007. "I'm gonna get a therapist, because this is too much."

Dafils, 45, is the founder of Haitian American United for Change, a social service agency that helps people navigate the immigration system, find housing and land jobs. In the aftermath of the earthquake, he has been contacting relief groups in Haiti and meeting virtually with fellow Haitians in Philadelphia to coordinate fundraising efforts. He said they do not want to repeat mistakes made in 2010, when a 7.0 magnitude earthquake killed an estimated 200,000 people, injured 300,000 and left millions homeless.

The first mistake, Dafils said, was directing funds to large organizations like the American Red Cross, which raised nearly half a billion dollars but built only six permanent houses with the money, according to a 2015 investigation by NPR and ProPublica. The second mistake was buying and shipping large quantities of supplies such as rice and water, which he said were already available in Haiti. Not only were the supplies held up in customs, but they also devastated local business owners when they finally arrived.

"They had to fire people," Dafils said. "The worst part, after two months, we left. We go back to our lives, and now those people have to close down because they could not sustain because we dumped all this product in the market."

After another preliminary meeting on Tuesday, Dafils was encouraged with the collaboration on display in Philly's Haitian community.

"We may not be able to do a lot (right now), but at least what we're doing is efficient at this time," he said.

"We are resilient people," he added. "We have to put our heads together."

Here's how you can help three Haitian-led groups in Philly that are organizing earthquake recovery efforts.

Dafils' nonprofit is accepting donations through its website: haucpa.org. He said the money will go directly to organizations working in the south of Haiti that can support local businesses while providing residents with shelter, food, clothes and shoes.

"We want to make sure that whatever we're buying, we're getting locally," he said. "We don't want to destroy the economy again."

Dafils also said he hopes to speak with Haitian therapists around Philadelphia to offer counseling sessions for members of the community who are struggling to process the trauma of the past year.

"COVID really affected the Haitian community in Philadelphia," he said. "... We had funerals left and right in the Haitian community as it affected other people, also. So we are dealing with this — you have death like this — and now on top of it you have people who are dead in your homeland or the town that you're from, so it's a very tough time."

Founded by Carine Dorlus, Philadelphia for Haiti has launched a GoFundMe to raise $40,000 for a 12-person trip to the country at the end of September.

Dorlus, whose family lives in northwest Haiti, appeared on FOX 29 to speak about her fundraising efforts. She recounted her trip to the country in October 2020 to observe how it was dealing with the pandemic in anticipation of a larger group trip. With its focus shifting from the pandemic to earthquake recovery efforts, Dorlus' organization hopes to bring volunteers with experience in fields such as nursing and construction. Donations will cover transportation, lodging, meals and emergency expenses.

"In the past, I would ship barrels to Haiti, Dorlus told FOX 29. "But right now with how things are going the barrels would not get there in time."

A GoFundMe created by Philly's Haitian American Chamber of Commerce hopes to raise $500,000 to rebuild 300 homes that were destroyed by the earthquake. The organization plans to send a group of qualified and licensed professionals to Haiti to oversee the project, provide mental health services to grieving families and support local businesses in their recovery efforts.

"One of the things that they really need after things like that is mostly mental support," Merytony Nathan, the chamber's vice president, told CBS3. "They're not really strong at the moment, and they really count on us in the diaspora to really help them with certain things."

According to the chamber's GoFundMe page, 60% of money raised will go toward the housing project; 20% will fund expenses and overhead costs; and 20% will be allocated to stimulating the local economy. All donations are tax deductible, and the organization said it will send donors a fundraising report by request when its work is done.

The Haitian Chamber is also seeking physical donations, which can be dropped off at Fritay Lakay Restaurant, 6334 Rising Sun Ave. To get a full list of supplies needed, email jnguillaume4@gmail.com.