Bill either provides 'patient protection' or is 'misguided policy' 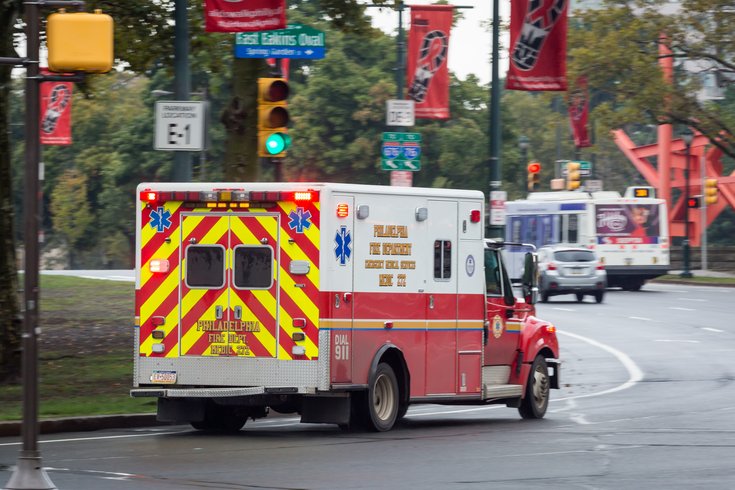 An ambulance in Philadelphia.

The New Jersey legislature is considering a consumer protection bill that would require hospitals and physicians to disclose more information before referring or transferring patients to an out-of-state health care provider.

Under the Patient Protection Act, patients would be informed of their right to receive care from the provider of their choosing. They also would receive the clinical reasoning for an out-of-state referral or transfer, the location of the recommended provider, and a list of any in-state providers offering a similar service.

The General Assembly passed the bill with overwhelming support last week. The Senate's Health, Human Services and Senior Citizens Committee is slated to vote on a companion bill on Monday.

But not everyone is happy with the proposal.

Ralph Muller, chief executive officer of the University of Pennsylvania Health System, says the proposed regulations are an unnecessary burden that will force health care providers to waste precious time fulfilling arbitrary rules. He called the legislation a "misguided public policy" that "reeks of protectionism" in an op-ed co-written with Shore Medical Center President Ron Johnson.

"When time is of the essence, patients should expect their care team to provide the best possible treatment while also ensuring the transfer goes smoothly," they wrote. "This bill interferes with doctors' ability to do both, and ultimately, patients will be imperiled."

Jefferson Health expressed similar concerns regarding trauma care patients in a statement to PhillyVoice, noting current regulations already allow patients to choose where they wish to be transferred. Both Jefferson and Penn Medicine have multiple health care facilities in both Pennsylvania and New Jersey.

Under the proposal, doctors and hospitals are required to explain to trauma care patients why they must be transferred to an out-of-state facility rather than a Level I or Level II trauma center in New Jersey. They must notify the patient's insurer and inform the patient of their coverage and any estimated out-of-pocket costs.

Compiling that information can take doctors anywhere from 30 minutes to a couple hours, according to Dr. Jacob Gutsche, co-director of Penn Medicine's lung rescue program. Additionally, he said reaching insurers in the middle of the night can be virtually impossible.

Penn's lung rescue program rushes throughout the tri-state region to airlift patients suffering from acute respiratory failure at community hospitals to Penn Presbyterian Medical Center. Many of them require mobile Extracorporeal Membrane Oxygenation (ECMO), a relatively new capability only used by a few health systems in the Northeast.

"What we're very concerned about is that this will put more of a barrier to (hospitals) calling in the first place because of the administrative things that they'll have to do before they call us," Gutsche said. "Or it will delay that call possibly for hours. In many of these cases, a 30-minute delay is a big deal."

Last year, the lung rescue program transferred 38 patients from New Jersey hospitals to Penn Presbyterian. But other trauma patients, including those with life-threatening neurological, obstetrical and cardiac emergencies also would be affected.

When hospitals have been delayed, for varying reasons, in contacting the lung rescue program, Gutsche said saving the patient becomes more difficult.

"Everybody agrees that a patient should have an understanding of what they should have to pay for financially for their care," Gutsche said. "What they don't want is some poor doctor doing their best to save their life in the middle of the night to have to figure out ... what their bill would look like."

Executives from Penn Medicine and Jefferson Health also noted that many New Jersey residents who live near border states regularly venture out of state for medical care – particularly to see specialists.

"It is their choice," said Joe Devine, president of Jefferson Health – New Jersey. "Depending on their condition, many will not hesitate to travel, especially if it doesn't even require them to leave their insurance network and streamlines care coordination between their physicians."

Pennsylvania law includes a Patient's Bill of Rights that requires patients be given an explanation and alternatives to any recommended transfer, including those in state. But it does not require hospitals to contact insurers and provide cost breakdowns, as in the New Jersey proposal.

Not all health systems oppose the New Jersey bill.

Cooper University Health Care, which operates the only Level I trauma center in South Jersey, provided a statement to PhillyVoice outlining its support of the legislation.

"Cooper University Health Care supports the Patient Protection Act as the bill will increase the rights of patients to obtain critical information so they can make informed choices about where they receive health care," the statement read. "We were pleased to see the bill overwhelming passed the Assembly with bipartisan support."

Additionally, the chief executive officers of Atlantic Health System, Hackensack Meridian Health and RWJBarnabas Health announced their support for the legislation in a jointly-written op-ed touting it as a valuable consumer protection.

"The goal is not to prevent patients from choosing out-of-state providers," they wrote. "Instead, the New Jersey Patient Protection Act seeks to ensure patients are making a meaningful choice. The bill would still allow residents to seek care out of state, but would arm patients with critical information to allow them to assess whether medical or business considerations are driving their care options."

Still, Ed Pulkstenis, 53, of Florham Park, Morris County, said he is glad his doctors didn't need to take those steps when he nearly died two years ago.

In September 2017, Pulkstenis was battling Wegener's Disease – a rare disorder that causes the lung's blood vessels to become inflamed. His condition grew so dire that his family was told he likely would not make it through the night. They were given one final option – Penn's lung rescue program.

Penn deployed its team, but weather conditions were so poor that it couldn't airlift Pulkstenis from Morristown Medical Center in Morris County. Instead, they rushed him via ambulance to Philadelphia.

"Every minute counted – even the fact that they couldn't fly was a problem," Pulkstenis said. "There was enough time with the mobile transport to do it. But I think there's a point in medicine where you don't have the time to jump through a lot of paperwork. The doctors have to be able to step in and save lives and rescue people. And that's what they did for me."

Senators Stephen Sweeney and Troy Singleton – the two South Jersey prime sponsors of the Senate bill – did not return calls seeking comment. Nor did Assemblyman Nicholas Chiaravalloti, of North Jersey and one of the bill's prime sponsors in the Assembly.