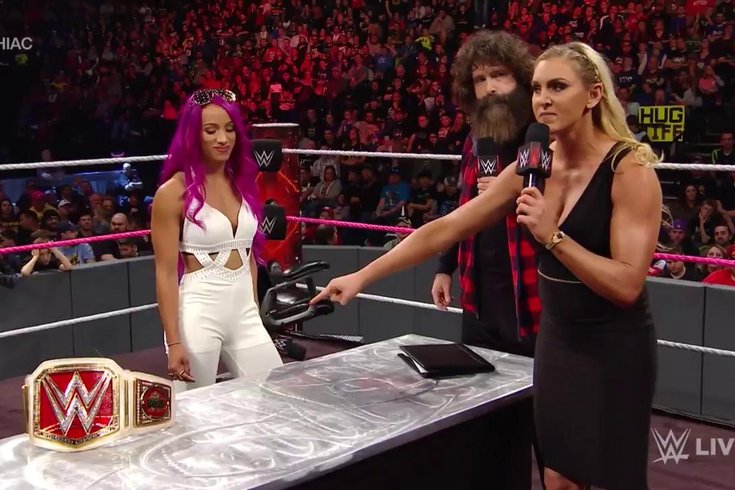 The TD Garden in Boston will be the site of one of the most anticipated pay-per-views of the year.

Or, at least, that’s how WWE will portray it leading up to Sunday night. The Raw brand will present Hell in a Cell this weekend, where Sasha Banks and Charlotte will make history in becoming the first women to ever compete inside the demonic structure. I can’t wait for that.

But in addition to the true main event of the show, there are a few other good matches on the card.

Here are my predictions for what will go down Sunday night:

Here’s a perfect example of how WWE has gone through the motions and not even really tried to build the Cruiserweight division into something special. Why do we care about either of these teams? It’s not even really a showcase. If this match happened on NXT, it would probably be light years better than what we’re going to see on Sunday.

The division’s title picture has also been lackluster, so that puts a sour taste in many people’s mouths after the Cruiserweight Classic. That was some of the best wrestling and in-ring psychology we’ve seen in a long time. The Cruiserweight Division on Raw has not been that. Not even close. The winners of this match don’t even matter in the long run.

I don’t have a problem with Bayley being programmed with Dana Brooke while Banks and Charlotte fight over the Women’s Championship. But WWE isn’t really utilizing Bayley well enough since her debut on the main roster – she’s already lost a number of matches. She’ll win here, but the real challenge for the creative team is pitting her as the next big threat to whoever is the Women’s Champion after Sunday.

Enzo and Cass are not in the tag team title picture yet, but they will be eventually. Meanwhile, they’re engaged in a feud with another team who really can’t afford to lose. Yes, we all know WWE’s mantra is wins and losses don’t matter. Gallows and Anderson haven’t done much of anything after the brand extension, and Enzo and Cass remain the most over act on either of the main rosters. That’s why I’m sure Gallows and Anderson will get a confusing win that doesn’t make them look strong and, eventually, Enzo and Cass will get the win back. So what’s this match even for?

It wouldn’t surprise me one bit if WWE pulled the trigger on a title change here. Cesaro and Sheamus have made the most out of their storyline together the last couple of months, going from competing in a best-of-seven series against each other to becoming No. 1 contenders for the tag titles.

How does that story end? Likely in tag team gold where they can still fight each other. The New Day is still remaining relevant and true to their on-screen characters as they were two years ago. In today’s era of professional wrestling, that’s a very long time. If they weren’t going to drop the tag titles to Gallows and Anderson, then maybe they shouldn’t drop the tag titles. At least not yet.

I’ve predicted the trio to drop the tag titles in matches for a while now. At one point, they became bigger than the titles and I felt like they didn’t need them. While that may still be true, it’s obvious WWE doesn’t place the utmost importance on its championships like it should. If Cesaro and Sheamus walk away with the titles on Sunday, I’m afraid they’ll just get buried. But, hey, why worry about championships in an entertainment company, right?

Although the WWE has mishandled the cruiserweight division in epic fashion, I still think Perkins vs. Kendrick could be the top match of the night on Sunday. The division has fallen flat because there’s no storyline to make us care about any of these guys, and there’s rarely a cruiserweight match on Raw that means something.

This past Monday, we saw Kendrick lose a match to Rich Swann and then run into Perkins in the locker room and practically beg the champion to let him win at Hell in a Cell. That’s a new wrinkle, but is it enough to save the feud?

Perkins and Kendrick could very well be a blood feud, but it’s lacking something. Maybe it’s the ongoing backstage promos and lackluster cruiserweight division matches, but I don’t feel as good about this as I did over a month ago. Even with that new wrinkle they added this past week. I don’t see the title changing hands, though.

Hell in a Cell match for the WWE United States Championship

I am likely in the minority, but I think this feud has been … okay. I thought it had a lot of promise and I expected Reigns to be the United States Champion after it was all over, but Rusev’s been made to look like a chump ever since the summer. Reigns destroyed him at SummerSlam and then eventually won the United States title at Clash of Champions. Since then, Rusev’s probably gotten one, maybe two, really good segments where he’s destroyed Reigns and actually seemed like a credible threat to him.

But this program is likely all about having Reigns back in the good graces of the fans. He’s been cheered more than he was before, but people still see right through him. He doesn’t connect with the majority of the audience.

What’s next for Reigns after this feud anyway? He’s not going to lose the title and go right back into the Universal Title picture. In fact, if that happens, that’s a huge mistake on WWE’s part. Reigns should be the U.S. Champion that John Cena was and defend it every week and put on great matches before he’s put back into the main event scene. And I think this is the beginning of that. Reigns wins, though I’m not quite sure we’ll see a lot of use out of the Cell in this one.

Hell in a Cell Match for the WWE Universal Championship

That’s not to say that it won’t be a good match. These guys can have a good match in their sleep. I just don’t think the added layer of Hell in a Cell is warranted in this case. To WWE’s credit, they’ve been trying to build this feud as best as they can and, while it makes sense, it’s just lacking that spark. Chris Jericho’s involvement has been great, because he’s reinvented himself time and time again to stay relevant weekly on WWE television, but even that doesn’t seem like it’s enough.

Hell in a Cell Match for the Raw Women’s Championship

This is the true main event of the pay-per-view, regardless of where they’re placed on the card. I mentioned blood feuds earlier, and that’s exactly what this is. It’s the perfect way to end the Banks-Charlotte feud – for now – and I wouldn’t be surprised to see a debut or re-debut of somebody after the match to build to the next feud.

Some think because this feud is being placed in Hell in a Cell – and it’s the first time a women’s match will take place inside the demonic structure – that it couldn’t possibly live up to the expectations Hell in a Cell has put forth throughout its near 20-year history.

And to that, I say: there’s a first time for everything. The psychology this match will bring will make up for the high spots and jumping off the top of the cage that we’re so used to seeing. It’ll surprise a lot of people, and certainly won’t be the last women’s Hell in a Cell match. I don’t think the championship changes hands.

This is the last pay-per-view until Survivor Series and the last brand-specific one until December. I’m looking forward to another good show from the Raw brand and, even though there’s two too many Hell in a Cell matches it’s all about the quality of the match. Will we see blood? Should we see blood? I think in these types of matches, we absolutely should. I doubt we will.

As it goes, I’m currently predicting no championships change hands in Boston. Simply put, there doesn’t need to be title changes on this show. The champions on the Raw brand now should have long runs with their respective titles, with the exception of The New Day. If the champions were facing Anderson and Gallows again, maybe I’d feel differently. Having a tandem of Cesaro and Sheamus defeat the longest-reigning WWE Tag Team Champions ever makes the least sense out of all of these matches.