Here's a new way to witness big events in Philly 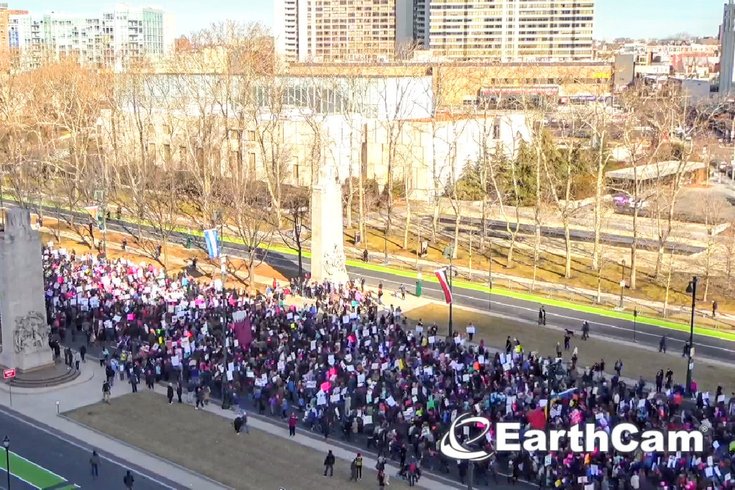 This screenshot from EarthCam's live camera on top of the Franklin Institute shows the Women's March in Philadelphia on Saturday, Jan. 20.

Whether its fans celebrating an Eagles victory, or a Fourth of July concert or a march for women's rights, a new live stream provides the opportunity to view big events in Philly with a bird's eye view.

EarthCam, a webcam company, recently announced they've placed a camera atop the Franklin Institute which will provide live streaming of the Benjamin Franklin Parkway, Logan Square, the Philadelphia Museum of Art and the rest of the area surrounding the interactive museum.

The company notes the Parkway is home to many events, ranging from parades, concerts and activist rallies. Which makes it an interesting tool for when you want to see what's going on but are stuck at work, home or elsewhere.

Now, if you look at the live camera on a Tuesday around 10 a.m., the feed will probably be boring, as it was for me. But imagine what the stream might look like for the annual Thanksgiving parade, the Made in America concert or if the NFL draft ever returns?

In fact, the camera has already given viewers a live look at a big gathering, capturing images of Saturday's Women's March.

Crowds are gathering in Philadelphia for the #WomensMarch2018. Live on https://t.co/Bt8qg6YtLy. pic.twitter.com/zG0f39UWJC

Our newest live streaming HD camera is online & showing the #WomensMarch in #philadelphia. EarthCamTV is available 24/7 on #AppleTV & #amazonfire. pic.twitter.com/RbXH9ARB7E

You can check out the camera here.