Here's what the new Pa. congressional map could look like 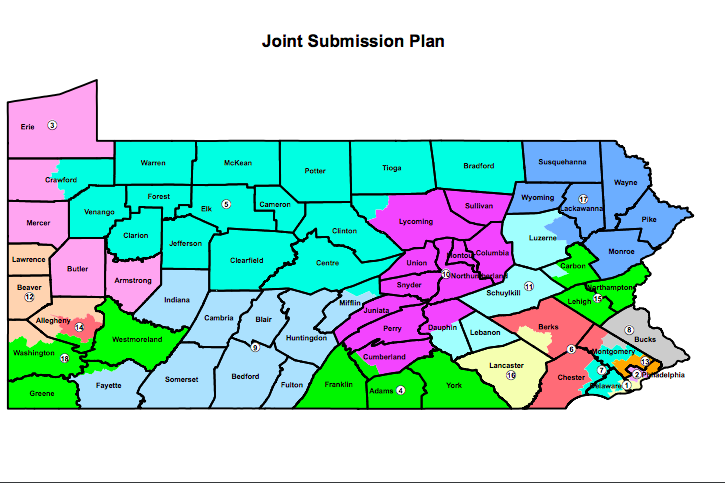 Shown is a proposed redistricting plan for Pennsylvania's congressional districts, which are considered among the most gerrymandered in the United States. GOP lawmakers submitted the plan on Friday to Democratic Gov. Tom Wolf, who has until Feb. 15 to approve it.

Pennsylvania Republican leaders beat a midnight deadline and sent their plan for a new congressional district map to Gov. Tom Wolf on Friday.

If approved, the proposed blueprint would replace the current congressional district lines, struck down by the state Supreme Court as illegally gerrymandered last month. The Republican-controlled Assembly was ordered by the court to submit a redistricting plan by Feb. 9, and it gave Wolf – a Democrat – until Feb. 15 to approve the plan.

Senate President Pro Tempore Joe Scarnati released the map on his website, and outlined how the map falls in line with state constitutional guidelines.

The proposal includes big changes for the Philadelphia area and the Lehigh Valley.

The 7th District, which has been particularly criticized, would cover large areas of Montgomery and Delaware counties and a portion of eastern Chester County. Currently, the district snakes through five counties.

The 15th district would be condensed to Lehigh and Northampton counties, as well as most of Carbon County. That would replace district lines that now stretch all the way from Allentown and the New Jersey border in Northampton County to suburbs east of Harrisburg.

According to the Democrat-controlled court, the redistricting plan must consist of contiguous districts that do not divide any county, city, municipality or ward, except only when needed to ensure that districts have equal populations.

"This map took into account information provided by the Pennsylvania Supreme Court in their majority opinion, which we received two days ago," Scarnati and Pennsylvania House Speaker Mike Turzai wrote in a letter to Wolf. 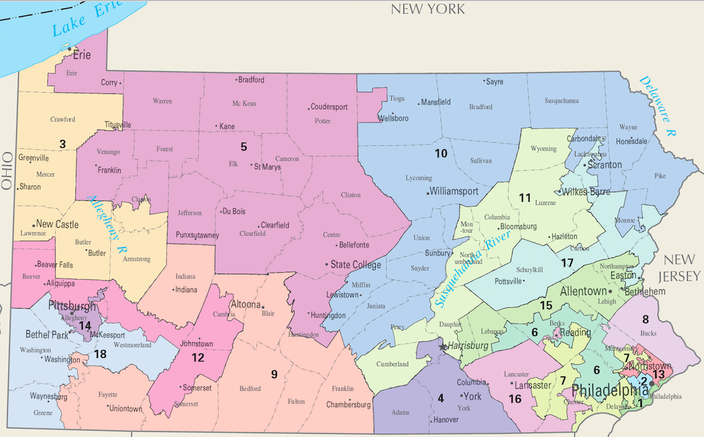 Pennsylvania's current congressional map is shown. The state's congressional districts are considered among the most gerrymandered in the United States.

The 18th Congressional District seat has been vacant since Republican Tim Murphy resigned in October 2017. Because of an upcoming March 13 special election to fill Murphy's seat, the 18th District will be unaffected by the court ruling.

In a 5-2 decision along party lines on Jan. 22, the court declared that the state's 18 congressional districts "clearly, plainly and palpably" violate the state constitution.

Republican lawmakers have defended the maps as constitutional.

The decision stemmed from a legal challenge by a group of 18 Democratic voters and the Pennsylvania League of Women Voters.