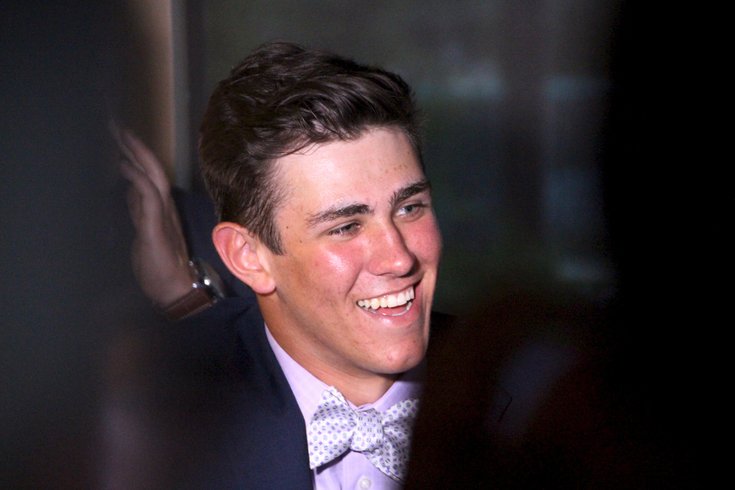 Holy Ghost Prep shortstop Nolan Jones, taken by the Cleveland Indians with the 55th pick in the MLB Draft, during his draft night party at the Irish Rover Station House in Langhorne, Pa.

Two months ago, Nolan Jones was wrapping up finals and preparing to graduate from Holy Ghost Prep. Unlike most of his classmates, however, he won't be mowing lawns or working a minimum wage job this summer to save up some money for college.

He's still going to be working, however, even though the 18-year-old from Langhorne just became a millionaire.

After being drafted by the Indians with the 55th overall pick of the 2016 MLB Draft, Jones has decided to skip college and head directly to the pros. Following a physical in Cleveland on Friday, Jones signed with the club for $2.25 million and will immediately report to Arizona for rookie ball.

Jones, who was deciding between the Indians and heading to the University of Virginia on a baseball scholarship, was considered by many to be a first-round taken. But on draft night, a shake-up at the top of draft allowed top pitching prospect Jason Groome to fall to the Red Sox, a spot many thought Jones was a good fit.

Still, the left-handed-hitting shortstop lands in a first-place organization -- he's already had a chance to meet the Indians' Michael Brantley -- and couldn't be happier to begin his pro career.

"It's surreal," Jones added when asked what it's like to be able to call himself a professional ballplayer.

Some think he could be moved to the outfield at some point because of his arm strength, but where Jones truly dominated during his time at Holy Ghost was at the plate. Here's a look at his numbers from his senior season:

"I can't even put it into words. It's surreal," Holy Ghost coach Vince Rossomando said on draft night of having a player taken so highly. "I couldn't be happier for him. He's earned everything he's ever accomplished. And it's kind of appropriate he went in the second round, because he's had to fight everything. Northeast guy. Small, private school.

"He was a first-round talent taken in the second round. He's going to surprise some people."