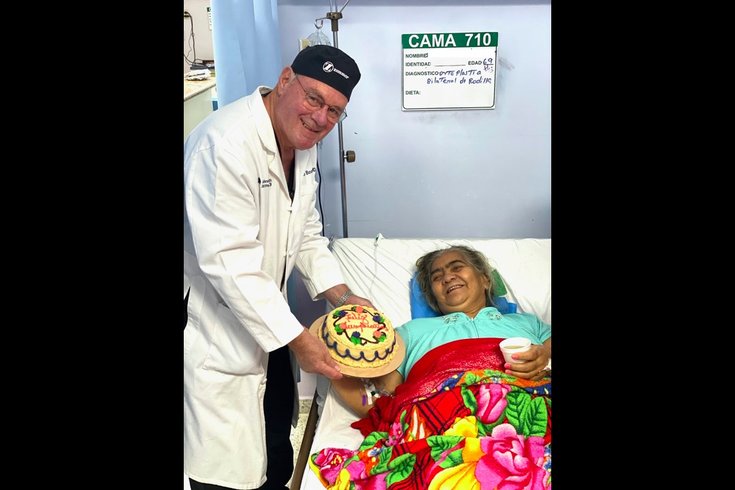 Dr. Robert Booth, medical director of Jefferson's 3B Orthopaedics, poses with a Honduran woman who received two knee replacements on her birthday. Booth led an orthopedic surgical team on a week-long mission trip to Honduras.

A Honduran woman in her 80s spent her birthday last week having both of her knees surgically-replaced. Many people would be grimacing in pain. But she couldn't stop beaming.

Days later, her smile remained on the mind of Dr. Robert Booth, the Jefferson Health orthopedist who performed her surgeries. And, really, how could it not?

"She had spent her whole life with crooked legs and limited ability to get around, to work, to raise a family," Booth said. "She had this smile you couldn't erase from her face. Most of my patients up here aren't smiling the day after surgery. She couldn't stop.

"She knew this would mean she'd be independent for whatever years she has left and be out of pain."

Booth, the medical director of Jefferson's 3B Orthopaedics, led a surgical team on a medical mission trip to San Pedro Sula Cortes, Honduras, last week. They were joined by four additional teams from Colorado.

Collectively, the five teams completed 62 joint replacements without any complications or infections. Booth's team handled 17 of them, including many of the most difficult cases.

Many of the patients had been walking around for years with bowed or knock-kneed legs. With limited access to treatment, they ground away their cartilage and bones by simply walking around.

"There were some very dramatic deformaties, people with hugely bowed limbs that had been that way most of their life," Booth said. "They were incredulous that they now had straight legs and were a little taller."

Booth had made eight previous mission trips to Central America during his decades-long career, bringing modern medical treatment to impoverished populations that lack access. Many of the patients have conditions no longer common in the United States. They hear of the missional clinics through word of mouth. 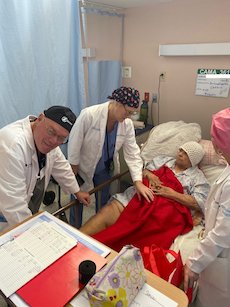 Dr. Robert Booth, medical director of Jefferson's 3B Orthopaedics, and his team completed 17 knee replacements, including one to this patient, during a medical mission trip to Honduras.

Booth was struck by his patients' bravery, he said, noting they quickly trusted an unknown surgeon – who doesn't even speak their language – to operate on their knees, all in hopes of improving their lifestyles.

Plus, their pain threshold is higher than that of Americans', the surgeon said.

Afterward, many of them walked home within a day of surgery – without taking narcotics and without complaining of pain. Most of them got by using Tylenol.

"It's just astounding to me," Booth said. "Nobody knows why, except this is just their way of life. They don't take much in the way of medication, and they handle pain better than we do here."

Booth made the trip despite the tenuous relationship between Honduras and the United States.

The Trump administration recently reached agreements with Honduras, El Salvador and Guatemala that require migrants first to seek protection in those countries, a policy aimed at reducing U.S. asylum requests. Many Central American residents are fleeing crime and corruption in their native countries.

"I think it serves our country's image well," he said.

To run the clinic, Booth's team transported all sorts of donated medical equipment and devices unavailable in Honduras. The team worked 12-hour days in excessive heat, taking extra precautions to ensure sterilization and meet other medical standards made more challenging by the environment.

Working in such an environment underscores the health care privileges that medical professionals and patients enjoy in the United States, Booth said.

Additionally, many Honduran doctors scrub into the surgeries so they can learn how to do joint replacements on their own. Booth particularly was impressed by a third-year, Honduran medical student who served as his team's operating room assistant.

"I thought he was an attending physician," Booth said. "I was quite impressed with him. I think he'll be a leader of that country's orthopedic efforts in the years to come."

Despite the challenges, undertaking these mission trips ends up restoring his enthusiasm for his day job in Philadelphia, Booth said. They provide a relief from the red tape of the American health care system, allowing him to focus solely on patient care.

"These people are truly crippled," Booth said. "To see them be unable to walk and to be able to walk home the next day – it's what we went into medicine for."