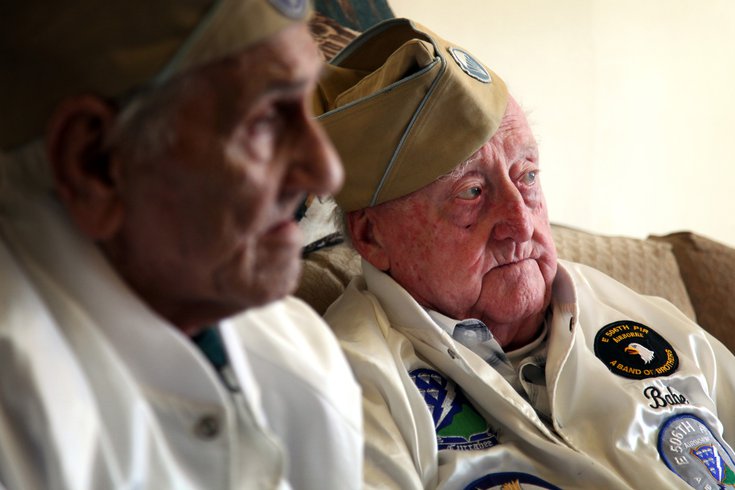 South Philly natives Bill Guarnere and Edward Heffron served together in World War II and fought in the Battle of the Bulge and Operation Market Garden. Above is a file photo of both men from 2010.

Documentary filmmaker Ken Burns has rolled out a new series called "Honor Your Hometown," which he describes as "a non-partisan, all-volunteer campaign to honor hometowns across America."

“The Honor Your Hometown campaign is about all of us," Burns said. "It is a reminder that no matter where we’re from, big city or a small town, North or South, East or West, we are connected to the places and people who shaped us. So much more connects us than divides us. We are the United States. We are 'us.' And there is no them.”

Mayor Jim Kenney was tapped to represent Philadelphia for the project, and he took it as an opportunity to pay tribute to Bill Guarnere and Edward "Babe" Heffron — two World War II veterans from South Philly who helped inspire the 2001 HBO miniseries "Band of Brothers."

Sitting next to both men's memorial at Herron Playground in South Philly, Kenney talked about why the monument is one of his favorite places in the city.

"The reason I love this place is because these two men represent the best and brightest of a great generation that fought back the Nazis, fought back totalitarianism and kept our democracy, things we even talk about today," Kenney said.

What made both Guarnere and Heffron special was their humility, Kenney said.

"The other thing I love about [Guarnere and Heffron] is they were generally just regular people," Kenney said. "They jumped behind enemy lines at Normandy on D-Day and the day before D-Day, fought the Germans through Europe and into Berlin. They came back and assumed normal lives. Just worked as normal people and never wanted to talk about the things that they had accomplished, the things that they had done. I was honored to know both of them. I had conversations with both of them. I had beers with both of them, and they're both very important people to me personally as growing up and becoming more of an adult.

"[Guarnere and Heffron] are both here in spirit. I love them both. I miss them both, and this is one of my favorite places to be."

Nicknamed "Wild Bill," Guarnere served as a staff sergeant in the U.S. Infantry. He landed as a paratrooper during the D-Day invasion and fought at the Battle of Normandy. Guarnere also fought during Operation Market Garden and the Battle of the Bulge.

Guarnere has earned awards such as the Silver Star, the Bronze Star and the Purple Heart for his military service.

Heffron was a private and paratrooper in the U.S. Infantry. He also fought in Operation Market Garden and the Battle of the Bulge.

Heffron was awarded the Bronze Star and Purple Heart for his military duty.

The two men co-authored a book called "Brothers in Battle, Best of Friends: Two WWII Paratroopers From the Original Band of Brothers Tell Their Story" in 2007. Guarnere and Heffron have both since passed away.

A section of Columbus Boulevard from Washington Avenue to Oregon Avenue in South Philly was renamed after both men in 2016.